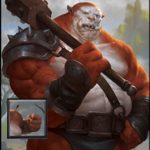 Valve released another flood of information regarding the upcoming Artifact rework today. The developer began this week’s blog post by revealing the reworks of three of Artifact’s most basic heroes and went into detail about its new design process when it comes to heroes.

One of the most defining traits of Artifact was how well it translated Dota 2 gameplay into a turn-based strategy card game. The three-lane system was unique and heroes were a major factor in creating a deck and executing a strategy.

While the heroes “have been viewed as one of the strengths” in Artifact 1.0, according to Valve, the developer has received feedback concerning the “underwhelming signature cards, lack of abilities, or heroes that fictionally don’t fit with their kit.”

After all, Dota 2‘s unique heroes in terms of design and effectiveness are wonderfully varied and a big part of what keeps players coming back for more, even through the MOBA’s legendarily punishing experience.

Valve intends for the heroes to feel a lot more special in Artifact. The team has provided each hero with at least one ability, which means that cards with multiple skills will pop up in the future. It’s apparently capped at two for the time being and at least one ability will be a passive. “Strong active and passive abilities” will “create interesting threats to play around,” according to the dev.

Signature cards have been revamped to “avoid being situational,” as well as making players “excited” to draw them. While they should work across a wide range of situations since there’s no guarantee that your hero can actually stay on deck, it’s a “bonus” if there’s “self synergy” with its hero card that allows the corresponding hero to use it to its fullest potential.

The interesting philosophy has resulted in radically different reworks of three basic hero cards—red Keefe the Bold, green Farvhan the Dreamer, and blue J’Muy the Wise. 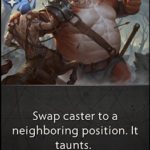 It’s a philosophy that’s exemplified well by Keefe the Bold’s rework. Keefe’s old signature ability is a modification card that targets red heroes. It’s a powerful card for red decks, but loses value in mixed decks and was generically bland and, at best, inoffensive.

The revamped signature card allows Keefe to build a niche as an actual tank that can draw aggro away from more fragile cards. Combined with his new ability, Stop Hittin’ Yourself, his taunt could potentially result in a three-unit trade in your favor.

This opens up interesting strategical options as well. A player holding Reckless Charge could opt for a greedy play and wait for his Keefe to deploy or spend the card and guarantee instant results in a lane. It’s a far more involved decision on the player’s part and could result in immensely hyped turnarounds. 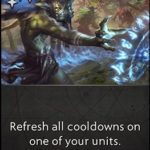 J’Muy the Wise’s signature card has also been changed. Battlefield Control was unique but had a tenuous control synergy with his ability.

J’Muy’s ability, Wisdom of the Elders, remains largely unchanged but an additional cooldown reduction aspect was added to it. Combining it with Runic Instigation can immensely speed up your card draw abilities but a cooldown refresh is now immensely useful when most hero cards and some units will have a powerful active ability.

Valve’s final parting gift was a call for fans to have a say in an upcoming hero in the beta. While previously revealed heroes like Mirana and Wraith King will likely make it to the forthcoming closed beta, the developer has created four additional hero concepts based on feedback:

The dev team said that their colors and abilities might change after undergoing more testing. You can vote for your favorite in this SurveyMonkey poll.