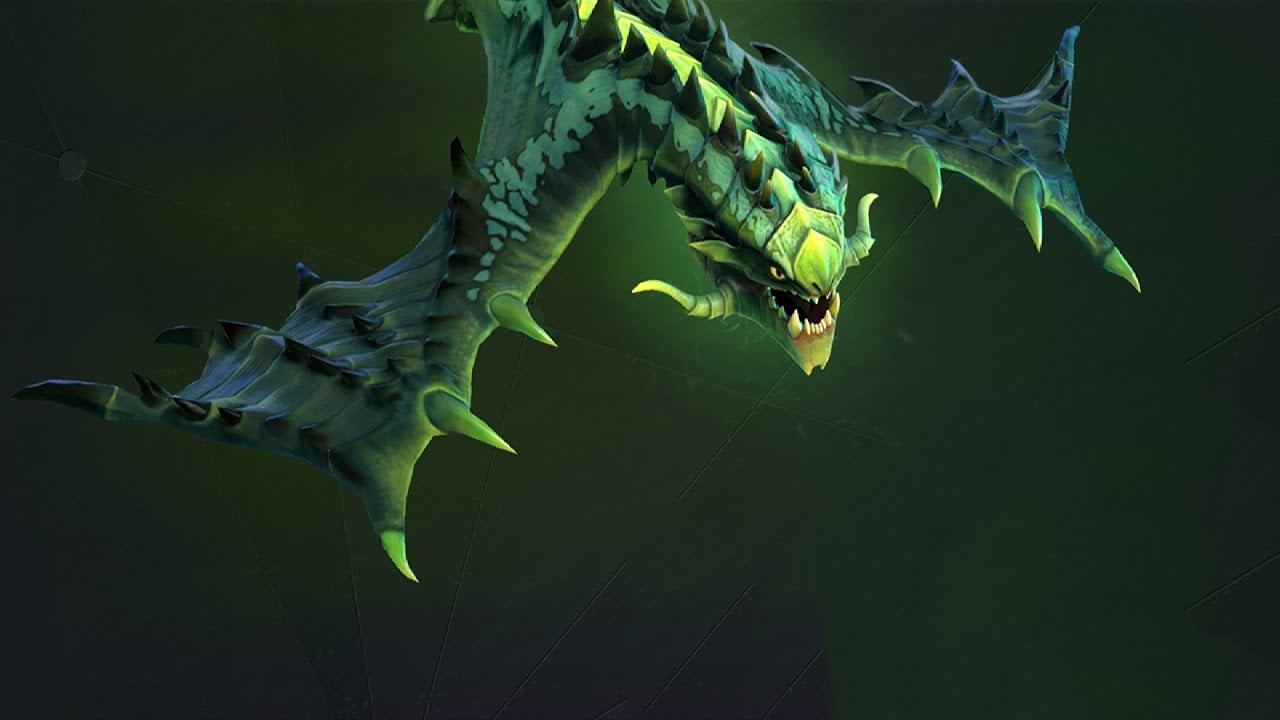 Dota 2’s roster is filled with exciting heroes like Invoker and Rubick that have immense playmaking capabilities. The game wouldn’t be the thriller that it is without more simple and stable heroes to bring the balance, however. Characters like Viper take pride in being dependable and require a lot less game knowledge to be played correctly.

Viper is the ultimate lane bully and a great hero to pick against lineups with heavy magic damage due to his defensive capabilities. Considering the hero lacks abilities that would turn him into a natural playmaker, you’ll need to watch your positioning and farm the right items depending on the situation to push Viper to his limits.

The hero is usually played in the mid lane so he can farm his core items quickly and get levels faster than anyone, but he also shines in the offlane with an aggressive support hero by his side. When Viper is played in the offlane, you can focus more on farming utility items since you’ll have two other cores to handle the damage-dealing part.

While the following items are generally what Viper players will want to farm during the course of a game, you’ll still need to choose between them depending on how your game is going and which heroes you’re playing against.

Viper’s skill build is usually straightforward, and you can only make a few adjustments depending on your lane situation, though most professional players don’t skill Nethertoxin until level eight since pushing the lane until that point is less than ideal for Viper.

In any case where your lane opponents decide to abandon the lane and farm the jungle, you can skill Nethertoxin a little early to push the lane and farm your jungle to boost your farm. You can also use this extra time you’ll get from pushing the lane to help out your teammates by teleporting or ganking. Make sure not to overdo this, though, since moving too much around the map will slow down your farming process.

Though not starting with any regen can look selfish, that’s exactly what Viper needs when he’s heading to the mid lane. He’ll need to complete his stat items as soon as possible, and buying his regen would only slow him down.

Ask your teammates kindly to lend you two Tangoes. In the case that your team doesn’t provide you any regeneration items or you’re going to another lane other than mid, you can tinker around your starting build to include regeneration items.

These are potentially the best starting items Viper can get after a game starts. Both of the Circlets and the Slippers of Agility allow Viper to complete two Wraith Bands in no time. Iron Branch can be used to extend a Tango’s duration for more healing, or you can save it to build a Magic Stick later in the game.

Faerie Fire is always a nice damage boost, and it can be used to burst to heal yourself when you’re in danger.

You can also opt-in for getting a single Circlet and use the extra gold to buy two Mangoes for passive health regeneration and a way of restoring your mana.

If you’re going to be side laning with Viper, you’ll need to get your own regen. While this will delay your early-game items, it’s nothing to be worried about since you’re likely to get a few kills during the laning stage.

Two sets of Tangoes is more than enough to sustain yourself throughout the lane, and the passive health regeneration from Mangoes will make it more difficult for enemies to bully out of lane.

You can choose to save the branches for a Magic Stick or use them for extra regeneration in desperate moments.

The early game usually refers to the time period between the horn and the 20-minute mark. During this stage of the game, most heroes focus on completing value items that provide the fastest results in teamfights.

You’ll need to pick between the items below depending on whether you’re one of your team’s primary damage sources. If your team has enough damage to win fights, you can focus on utility and survivability items.

Dragon Lance features all the stats that Viper needs throughout a game. Both strength and the agility bonuses of the item make Viper tankier.

In addition to them, Dragon Lance also increases the attack range of ranged heroes by 140. Considering Viper is always on the lookout for a spot to dish out damage in teamfights, the extra range allows him to be more flexible.

There will be certain games where you’ll know that it’ll take at least 40 minutes before you get the chance to hit the enemies’ barracks.

When that’s the case, you’ll need to keep farming to the best of your abilities. Maelstrom is the perfect item to fasten your farm since you’ll be able to take down stacks even quicker. It’s also a great pick to push down lanes, which will also be necessary at the later stage of a game.

Maelstrom can later be upgraded to a Mjollnir, a better version of the item that gives even more attack speed.

When your team has enough damage, Viper turns into the best source of utility items due to how fast he can farm. While Arcane Boots may look off on him regardless of the situation, it’s a key component for a late-game item that can turn the tides.

Arcane Boots will be a great source of extra mana for your team and will also make sure that you’ll never go back to base to get more mana. If you aren’t going for the utility route, your best bet will be purchasing Power Treads.

While most fights may look like they were pre-decided from the beginning, a 275-health bonus can change the tides in ways that one couldn’t imagine.

Mekansm is the item to get when it comes to healing your teammates during a teamfight, and it even comes with a sustaining aura that grants two health regeneration and three armor to allied units in a 1200 radius.

It also removes most negative effects from the caster, helping Viper become even harder to lockdown.

Viper’s ultimate is a great way to pick off anyone out of position. It has a nice damage-over-time effect and a slow that makes running away almost impossible.

Aghanim’s Scepter lowers Viper’s ultimate cooldown to 10 seconds and increases its cast range. Combined with a lower mana cost, Viper turns into a strike drone that can catch anyone out of position without putting himself in danger.

Dragon Lance is a great tool to increase your range, but Viper also needs mobility tools to make up for his slow movement speed. Hurricane Pike needs a Dragon Lance and a Force Staff to be completed, making it the most cost-efficient movement tool for Viper.

The item’s unique effect also allows Viper to keep hitting anyone. He uses the item up to four times with +100 attack speed, meaning it can also be used to finish off enemies.

Rod of Atos is a cheap disable tool that also comes with decent stats. If your team doesn’t have a way to stop teleporting heroes or lacks disabling abilities, it can be an excellent purchase to help you become more of a threat during the mid-game.

Viper usually farms everything he needs before the late game, and most of the items listed from now should be considered as royalty pickups that give Viper that extra push in teamfights.

Introduced to the game with the Mistwood update, Gleipnir combines Viper’s two core items with an excellent active ability. Gleipnir requires a Maelstrom and a Rod of Atos to be built.

The active ability of the item is pretty much an upgraded version of Rod of Atos, and you’ll be able to bind all enemies in a 450 radius for two seconds. This makes the item an excellent choice if your team is lacking a stun to setup a team fight.

Butterfly is a standard damage item for agility heroes. It provides a great deal of agility and evasion which can help Viper stand his ground versus hard-hitting carry heroes.

When playing against a hero like Huskar, you’ll need a tool to disable their passive spells that make them impossible to kill. Silver Edge helps Viper disable any annoying passive skills and is overall a decent source of damage.

It provides good attack speed and damage, alongside allowing him to go invisible, which can always open the door for easy pick-offs.

Evasion is a popular stat among agility carry heroes. Against an enemy that has evasion, a Monkey King Bar will always be a must-have since it helps you pierce through evasion with a 75-percent chance.

It doesn’t give any stats, however, which can make it less of a priority for Viper.

The following items heavily depend on the enemy heroes you’re facing and make it easy to play around certain heroes as Viper alongside helping out your team.

Pipe of Insight is an excellent tool against heavy magic damage lineups. Though Viper has a passive way of increasing his magic resistance, he can also help out his team with this item.

Purchase Linken’s Sphere against heroes that have powerful single-target abilities. It can be cast on allies as well, making it a great pick to protect your more important cores.

While it’s not a priority, Aghanim’s Shard will be an essential upgrade to increase your overall damage output. Aghanim’s Shard buffs Poison Attack, allowing it to stack up to eight times and each charge reduces Viper’s target’s armor by 1.5