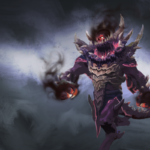 Like other heroes, carries also rise and fall in terms of popularity depending on their overall utility and what they can bring to the table. Luna has been a popular pick in the recent patches, and she owes most of her success to her skillset that allows her to shine during all stages of the game.

From farming fast to bullying offlaners, Luna doesn’t have any issues when it comes to finding farm and sustaining her lead. When she’s accompanied by support heroes who also try to stack as many camps as possible while she’s farming the lane, she can take over the game by snowballing.

Picking heroes who do exceptionally well against Luna will come in handy when it comes to dealing with her in the late game. Here are some of the best counters to Luna in Dota 2.

You don’t always have to pick a core hero that can counter Luna. Having a support that creates a lot of trouble for Luna can be just as effective and Shadow Demon is the perfect example of that.

Creating illusions is one of the better ways to counter Luna’s ultimate and Shadow Demon can also create illusions of Luna and use them while sieging high ground. This turns Luna into her worst enemy since if Shadow Demon’s team has the lead, it’ll be extremely hard to get rid of these illusions.

Shadow Demon’s ultimate will also be a great way to reduce Luna’s mobility. Once she’s slowed, Shadow Demon’s team can seize the opportunity to follow up with other stuns or focus on other members of Luna’s team during this time.

Singling out Luna and taking her out before a fight even kicks off is another valid strategy for dealing with her.

With Batrider, you’ll be able to Blink or use other mobility tools to reach Luna and bring her back to your team for a quick burst of damage. Having the vision advantage on the map will be the key to having the upper hand versus Luna.

Batrider can also farm quite fast and in the right circumstances, he can farm his core items faster than Luna. A farmed Batrider can dedicate all of his efforts to stopping any core hero on the map and with a little bit of help from his teammates, a Batrider can turn Luna’s game into a nightmare.

Luna has a lot of area of effect (AoE) presence, but it isn’t going to be enough to take out an evenly matched Spectre.

Spectre will have no trouble when it comes to getting hold of Luna during a teamfight. If it doesn’t go according to plan, Spectre can jump to another enemy and hopefully deal with Luna later.

In a crowded teamfight, Spectre’s ultimate can render Luna’s ultimate useless, which can cause her to lose a lot of momentum and help your team continue to advance and take more risks. Not only can Spectre out-scale Luna but she’s also an excellent addition that will give her team more space to move around fights and the map.

Combining Spectre with other Luna counters like Batrider will be a recipe for success. Spectre will always be able to reveal Luna’s position with her ultimate and Batrider can do the rest by dragging her back into his team.

Alongside Spectre, Phantom Lancer can turn out to be quite a nuisance for Spectre. There’s nothing worse than a Phantom Lancer running toward you with more than five copies of him—and Luna will certainly need help to deal with that kind of pressure.

Phantom Lancer counters Luna during the late game, but it’ll be hard for him to match her farming speed during the earlier stages of a match. Phantom Lancer will require a lot from his team to slow down Luna since she can easily deal with his illusions if Phantom Lancer is severely out-farmed.

Just like Spectre, reaching Luna won’t be a problem for Phantom Lancer. Building stat items alongside a couple of tanky pick-ups can help you maintain your form versus a Luna since you’ll need to make sure that you can stay in the fights for a long time. The longer you stay in a fight, the more damage you’ll deal in the long run, meaning a glass cannon build may not work in your favor versus Luna.

Tips and tricks to counter Luna

Aside from picking counters against Luna, you can pull some tricks to prevent Luna from snowballing. These require you to be active around the map and even leave your lane from time to time to make sure that Luna’s having a tough time keeping up with your team’s carry.

Prevent Luna from farming the jungle

Though lane dominance matters for Luna, she owes most of her farm to jungling, especially if she has support heroes who are also stacking the jungle as she’s farming up the lane. Preventing her support teammates from stacking will be the key to slowing her down.

You can place a ward on some of the camps closer to Luna and the ancient camps. Aside from warding camps, you can also take the fight to the enemy supports and gank them as they’re rotating around the map.

Ensuring your cores are having a decent time in their lanes will also be a priority since they’ll be the ones who’ll be challenging Luna toward the later stages of the game. If you’re playing a support hero and rotating around the map, you’ll need to find a decent balance between when you need to go back to your lane. As you’re trying to stop Luna, the enemy team may use the opportunity to put pressure on your cores, forcing you to make a decision.

Itemize against Luna as a core

Most of Luna’s early damage is magical—and getting an early Black King Bar as a core can help you be more present in mid-game teamfights since you’ll be negating most of Luna’s damage.