Team Secret win their fourth title at ESL One Birmingham

Evil Geniuses came so close to toppling the ESL kings. 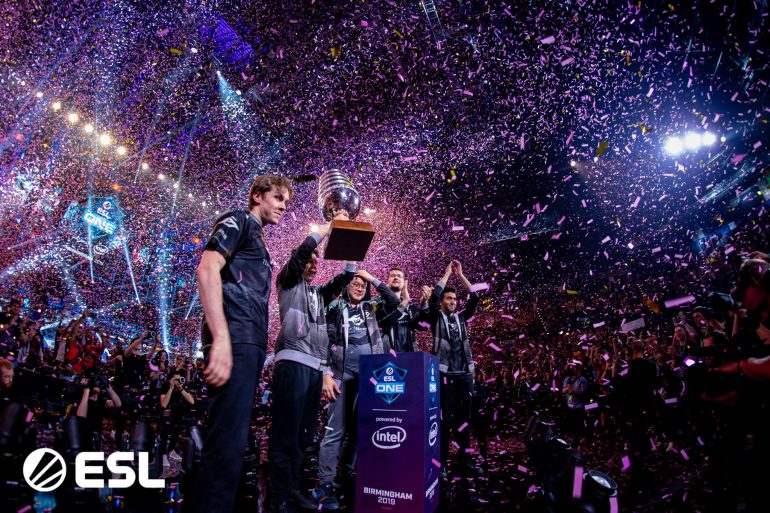 Team Secret shook off a messy start at ESL One Birmingham to climb all the way into the grand finals and win an incredible five-game series against Evil Geniuses today.

After reclaiming the top spot in the Dota Pro Circuit with a victory at the MDL Disneyland Paris Major, Secret came into Birmingham as the early favorites to win the whole thing.

Early on, Secret focused on testing lineups and implementing new strategies that helped them adapt to the changes made in the 7.22 update. That jump away from their normal play led to several missed opportunities during matches, which caused them to drop a few close games.

They were swept 2-0 by EG and split their series against both LGD Gaming and Keen Gaming to start the tournament. By the end of the group stage, Secret did pull things back by entering the playoffs on a four-game win streak.

From there, the dominant force that viewers are used to seeing when Secret plays didn’t let up as they rolled off wins against OG, TNC Predator, and Gambit Esports. That left them matched up with LGD in the lower bracket finals.

A 33-minute win in the first match put LGD in a great place heading into game two. But Secret were much more prepared, rolling to their own 33-minute win that was insanely one-sided. With 32 total kills compared to LGD’s four, the entire game was just a slow march by Secret to even the series.

That dominance helped them knock LGD out of the event in game three. It was a pretty clear cut win for Secret, who amassed 45 kills and generally zoned LGD out from their objectives. LGD managed to keep the structure and resource battle somewhat close, but that wasn’t enough to save them.

This set up a battle against one of Secret’s biggest rivals in EG, and they were ready for a long fight against the upper bracket champions. Game one was extremely close, with both sides trading kills for most of the match. Secret pulled things out late thanks to their cohesiveness and an expertly drafted Sven and Storm Spirit combo.

With first blood going to the lower bracket champs, EG fought back in game two and decimated Secret. It was a much quicker game than the opener and tied the series up at 1-1.

The two juggernauts continued trading games, with Secret dominating the lanes in game three and pacing themselves to safely take out EG’s structures without overcommitting. The defining moment came when Yazied “YapzOr” Jaradat perfectly timed a Black Hole to take out three EG players and secure the win.

On the brink of losing to Secret once more, EG swung for the fences in the draft. With the first Mars of the series, an odd Batrider pick, and Syed “SumaiL” Hassan getting to play his legendary Storm Spirit, EG took things to another level.

It was the most one-sided fight of the entire series as SumaiL utterly trounced whoever approached him and the offensive firepower that the remaining core built up delivered swift and crushing blows to Secret. The final kill count was 32 to six as both teams prepared for the deciding game.

In game five, EG geared up once more with Andreas “Cr1t-” Nielsen on Mars and an added Warlock to their core, while Secret locked in Dark Seer, Monkey King, and Nyx Assassin.

Both sides were giving no ground early on, but Secret got two nice picks with Clement “Puppey” Ivanov nailing down Shackles and helping take Gustav “s4” Magnusson out twice in just seconds. With things dead even at the 16-minute mark, EG fully committed to a teamfight and looked like they had the drop on their opponents. After locking down a few Secret players, EG slowly whittled away at them.

Secret turned that fight around quickly, though, taking out EG’s Mars and then breaking down the remaining offenders. Puppey even got a late kill on EG’s retreating Warlock to secure a 4-0 trade and great positioning for Secret.

Things really shifted when YapzOr and Ludwig “zai” Wåhlberg pulled off an incredible vac combo to kill three of the recently-respawned EG players, which allowed their team to rush right back in and hit EG’s defenses for free.

The game ended soon after that and Secret were crowned the ESL One Birmingham champions. This is the fourth ESL victory for Secret, making them the most decorated team in ESL One history after breaking their tie with Virtus Pro.

Following the win, Puppey was named the MB MVP of the tournament and was given a new car to go along with his trophy.

The StarLadder ImbaTV Dota 2 Minor is the next big event on the horizon, running from June 12 to 16. That event will decide the final competitors for the last Major of the season, the EPICENTER Major later this month.