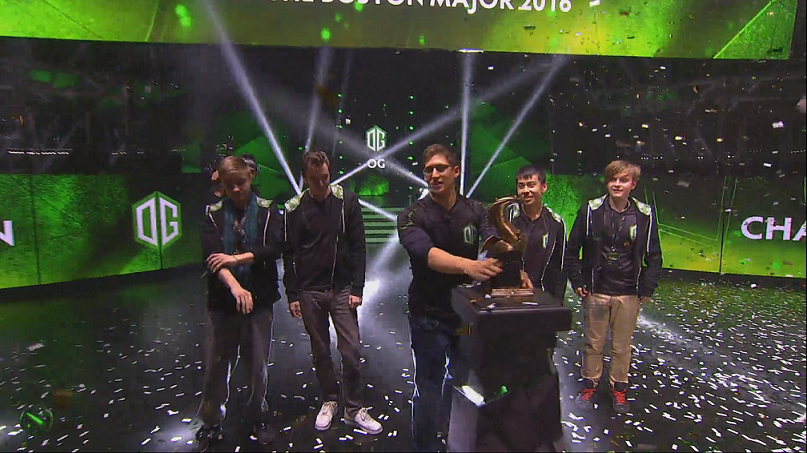 OG won their third Dota Major title in their thirteen month history in Boston, beating back the underdog challenge of Ad Finem.

The champions of Frankfurt and Manila were able to beat back a strong challenge from the heavily unfavored Greek side to win the final 3-1.

OG took the first two games in relatively comfortable fashion, both inside 45 minutes, and looked set to win the title. But then the Greeks fought back in an incredible marathon game that lasted nearly 80 minutes. The rookie side, who had never been to a Major before, showed all the hallmarks of the brilliance that allowed them to string together a series of upsets in the bracket stage.

In that movie-length game, OG were again en route to victory but this time Ad Finem were able to win some crucial team fights and start breaking down the OG base. The Greek side were able to ride the momentum—but even when OG were down to just their Ancient it still took 20 minutes for Ad Finem to claim the win.

After that marathon it was the experienced OG side who seemed able to capitalise, with a team wipe at 26 minutes and the concession from Ad Finem coming just 12 minutes later.

The result was something of a repeat of the team’s group stage clash. OG defeated Ad Finem 2-1 en route to claiming the top spot in their group. After splitting a pair of games with EHOME, Ad Finem could only manage third—but knocked off Newbee, LGD.ForeverYoung and Digital Chaos on their way to an improbable finals appearance.