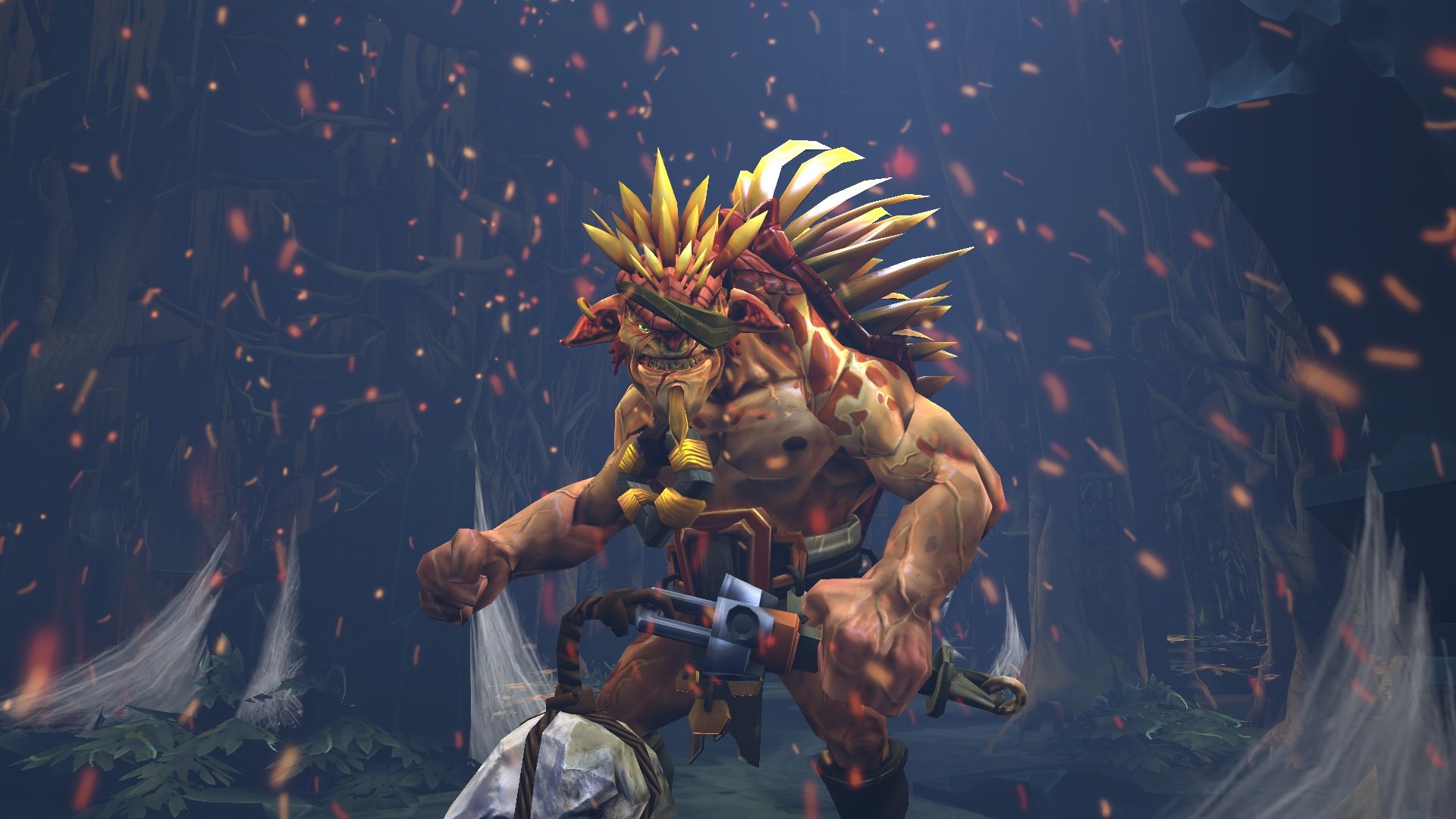 While it’s possible to form lineups without tanky heroes in Dota 2, a frontliner helps the other members of the team excel at their roles.

Some heroes need a little space around the map and in teamfights to cast their spells. A tanky hero can soak up the enemy’s attention and allow them to show their impact. Bristleback, in particular, is the perfect candidate for that.

Bristleback is one of the more beginner-friendly heroes in Dota 2 since he only has one targeted spell, two passives, and a click-to-cast AoE spell. The key you need to know about Bristleback is that he takes less damage from his back and sides. His third spell gets the credit for this and it makes it so that you might be better off turning your back to your enemy instead of marching toward them in some cases.

If you’d like a deeper look at how you can play Bristleback as optimally as possible, we recommend going into the Watch tab on the Dota 2 main menu and tuning into the highest ranked game featuring Bristleback. You can follow the game from Bristleback’s perspective with small tweaks to the spectator options.

Itemizing correctly is what separates the best Bristlebacks from decent ones since the hero can easily fall out of a match when he picks up the wrong items. You’ll want to buy items that’ll protect you against the strongest threats on the enemy team. But considering the options in the shop, this may not be the easiest task.

Here’s everything you need to know about playing Bristleback. We recommend taking a good look at the enemy team’s composition before you open the shop, however, since you won’t want to increase your tankiness against physical damage when facing a magic damage-heavy lineup.

Bristleback usually follows a straightforward route when it comes to his skill build. If he’s against passive laners who prefer reverting back to the jungle instead of fighting with Bristleback, you can easily skip leveling up your first spell until level eight. This will maximize your farm and allow you to clear out the stacks that your support may be preparing for you.

Even if you’re against an aggressive duo, you can do the same when you’re laning with a hero that has a stun or a slow. When that’s the case, not leveling Viscous Nasal Goo will increase your overall damage output.

Bristleback struggles with mana issues during the early game, but you’ll need to prioritize health regen to sustain yourself in the lane. The Quelling Blade is almost essential to make sure you don’t miss any last hits.

If you find yourself out of mana after an early-game skirmish, you can use the courier to buy more Enchanted Mangoes or mana potions. Don’t spend too much gold on them, though, because going overboard may delay your item timings.

Getting your boots quickly during the laning stage will help you chase down enemies with your quills. Considering the enemy support won’t be able to get their boots at the same time as you, they’ll turn into sitting ducks.

Use your boots to turn up the heat in the lane and try to secure a kill to push your lead further.

You won’t be able to rely on your tangoes and healing salves until the end of the game. You’ll also need to pick up items that transition into other core items that you’ll need throughout a match.

Ring of Health is an excellent pickup for some passive regen. It’ll help you return back to your lane with an almost full health bar even after clearing stacks.

Magic Wand is a must-have item even if you aren’t facing a lane with heavy-casters. Heroes that don’t spam spells will also use everything at their disposal to kill Bristleback when they can and you’ll still be able to stack up a decent chunk of charges.

Use these charges to replenish your mana while chasing an enemy hero or to escape from death when you’re low HP.

Ring of Health wouldn’t be as good as it is on Bristleback if it wasn’t building into a Vanguard. It’s one of the core items on almost all tanky heroes.

Vanguard increases a hero’s overall tankiness against physical damage. Bristleback usually goes to the offlane where you’ll be paired against the enemy team’s carry. Though carry heroes need a little bit of time to scale into the late game, they can still dish out decent levels of physical damage during the early game. Minimizing this amount allows Bristleback to bully these heroes out of the lane, slowing their farm in the process.

While some heroes will hate building a Hood of Defiance after completing a Vanguard, it isn’t going to be a problem for Bristleback. The added health regen and the increased tankiness will also improve Bristleback’s damage output since he just needs to survive to deal damage.

If you’re against a heavy magic damage lineup, you can skip Vanguard to rush a Hood of Defiance.

Just like Vanguard, a Hood of Defiance also builds into other core items that Bristleback benefits from.

The only times you’ll need to prioritize Pipe of Insight over Eternal Shroud will be when your team also needs a defensive tool against a magic damage dealer.

Similar to the case of Hood of Defiance, you’ll need to build a Crimson Guard when your team is being shredded by a physical damage dealing hero. Buffing them with Crimson Guard can suddenly change the tides in combat, allowing your team to survive more to deal more damage.

If the match is going according to your plans, Bristleback will usually take over the game with his mid-game items. You’ll notice that he may start falling slightly behind other cores who are considered as position ones—and you can get ahead of that by increasing your tankiness.

Assault Cuirass is an excellent choice for more armor and attack speed. The passive ability that comes with the item is what allows it to shine, however. The assault aura also gives a 30 attack speed bonus to allies alongside five armor. It even decreases enemies’ armor by five alongside buildings, meaning it doubles as a pushing tool toward the late game.

If you need more armor heading into the late game, Shiva’s Guard will be your second alternative after Assault Cuirass.

Shiva’s Guard is usually picked up against heroes like Tinker and Arc Warden who like hiding inside the trees while pushing side lanes. The active ability of Shiva’s Guard will allow you to get a glimpse of them as the circle enlarges and your teammates with movement-impairing abilities should be able to catch them in the meantime.

Against magic damage lineups, Bristleback will need HP more than armor. Stacking armor won’t mean anything against heroes that deal magic and true damage, but increasing your HP will ensure that you won’t get burst that easily.

If you have more gold than you need, it may be time to consider picking up some situational items. Though these items fit Bristleback’s overall gameplay style, they’re just less important than everything else he has to build to survive first.

Bristleback won’t be able to catch all the enemy heroes by himself. There will be times where he’ll need help and sometimes heroes are going to just run.

Aghanim’s Shard unlocks a new ability for Bristleback called Hairball. This ability allows Bristleback to send a flying projectile that hits his enemies with viscous nasal goo and two quills. This makes the ability a great tool to land killing blows when you’re out of range, in addition to starting fights.

If you’re the only true damage dealer on your team, you may need to squeeze a Radiance into your build. A Radiance will double as a farming tool and it’ll also increase your teamfight effectiveness.

You’ll need to be more careful with your positioning when you first pick up your Radiance, though, since you’ll also be less tanky.

Combined with the spell life talents, Octarine Core can be a decent alternative to increase your area of effectiveness. The 25-percent cooldown reduction will let you spam more quills and the cast range increase will ensure your quills to hit targets.

Crimson Guard may not always be an essential if you already have a tanky team. When that’s the case, you can turn your Vanguard into an Abyssal Blade.

While the passive bashing ability is nice by itself, the active effect of the Abyssal Blade increases the kill potential of Bristleback. You’ll be able to jump on top of squishy targets with your Abyssal Blade and your team will have an easier time to follow you since you’ll be soaking most of the damage.