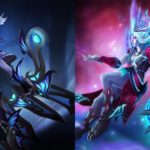 GOSU.AI’s latest infographic shows off some of the strongest Dota 2 hero pairings in the safelane. Drow Ranger and Vengeful Spirit are the clear winners at a 62.74 percent win rate, almost four percent higher than the next duo.

The data collected represented the best duos with “over 8,000 games played across all regions and all ranks,” according to GOSU.AI.

Here are the most successful safelane combos in Dota 2‘s Patch 7.27d and why they perform so well together.

While both heroes have been a strong duo in the pub and competitive scene for years, the latest iterations of Traxex, the Drow Ranger and Shendelzare, the Vengeful Spirit might be their most powerful yet.

The duo synergizes in every way, from laning to the late game. Traxex primarily deals ranged physical damage and Vengeful Spirit helps out with her powerful new aura that provides agility and attack range for Drow to fire at will. Vengeance Aura’s attack range also works with Drow’s Multishot, allowing her to cast the skill from an even safer distance.

Drow’s squishiness and lack of mobility mean that she’s a prime target for any prying opponent. Enter Shendelzare, whose Netherswap can bail her out of danger.

Vengeful Spirit continues to add value with her Magic Missile stun and Wave of Terror’s minus armor, allowing Drow to get close enough to unleash her flurry of painful Frost Arrows.

This isn’t the most complicated pairing in the world, but the ease of execution and viability through every stage of the game makes them a worthy pick up whenever you feel like crushing your enemies with a rain of projectiles.

Spectre and Warlock are two powerful teamfight heroes that scale well into the late game. What sends this pairing over the edge is their vast sustain and tankiness in the laning stage.

Spectre isn’t a great laner, but she can be rendered nearly unkillable with Dispersion. Her tankiness is further amplified thanks to incoming heals from Warlock’s Shadow Word.

As long as the couple passes the early laning stage without any major incidents, they’ll reward their allies with massive teamfight potential and one of the hardest carries in the game. Spectre can easily start a skirmish with Haunt, giving Warlock full view of the battlefield. The added chaos helps Warlock pick his spot, releasing his deadly Chaotic Offering and following up with Fatal Bonds and Upheaval.

If you want to play Spectre, try rushing Blademail. It’s the hottest new item for her in competitive play since its passive and active abilities work on creeps. It opens up neutral stacks for her, tanks her up, and allows her to make some fighting contributions earlier.

Drow is the only hero to make two appearances on the list, this time with a different support hero in Undying. It’s a testament to Drow’s strength as a carry in the current meta, but Undying is no slouch as a positive five.

Undying’s laning prowess lies in his ability to zone out heroes thanks to his natural bulk and the ability to steal strength with Decay. If the enemies try to turn their attention to Traxex, his Soul Rip heal will swiftly nullify dealt damage.

Later in the game, Undying’s Tombstone ability provides great vision, while its spawned zombies slow enemies. This gives Drow free rein of the battlefield, letting her pick her spot and snipe targets.

Undying’s Flesh Golem was reworked in 7.27b, debuffing enemies for direct damage amplification. It synergizes incredibly with Drow Ranger’s Marksmanship ability that gives her arrows a chance to pierce through base armor. Both offensive skills work independently and will undoubtedly put affected enemies through a world of pain.

Clinkz and Ogre Magi function similarly to the Drow-Undying combo in the lane. Ogre is one of the tankiest heroes at level one, while Clinkz has naturally high range and poke with Searing Arrows.

What Clinkz and Ogre lack in defense, however, they make up for with unbridled offense. Clinkz notably lacks crowd control, so Ogre aids with his Fireblast stun and Ignite slow. Should Clinkz manage to let loose his stock of arrows with Strafe’s increased attack speed, the likely result is a dead opponent.

Ogre’s Bloodlust starts to shine later in the game. Its movement speed boost isn’t very helpful to a hero that already has Skeleton Walk, but the added attack speed is welcome for the skeletal ganker all about bursting down enemies as quickly as possible.

Riki and Grimstroke is another powerful kill lane. Both heroes aren’t the most dependable on their own, but their skillsets intersect nicely with each other.

Grimstroke’s Ink Swell deals more damage and stuns based on how long enemies are affected, but it isn’t the most reliable initiation skill. Riki alleviates those concerns since he can stick close to his targets with two charges of Blink Strike. The combo only becomes more powerful later in the game with the assassin’s level 20 talent granting him extra cast range on the skill. The stun can then be easily followed up with a Stroke of Fate or Phantom’s Embrace, forbidding most opponents from responding.

Riki also tends to go for single-target killing items, such as Diffusal Blade, Abyssal Blade, and Nullifier. This works well with Grimstroke’s Soulbind, which gives Riki the opportunity to wail on two heroes instead of just one.

Luna’s weak laning ability is mitigated by Treant’s strength in the early game. The Protector also has two healing abilities with Leech Seed and Living Armor, allowing Luna to stay in the lane without returning to base.

Wraith King and Jakiro are difficult to push out of the lane due to their naturally high health and the aid of Vampiric Aura. The same can’t be said for their opponents, though, since the duo’s litany of slows, stuns, and damage over time easily whittle down any unwary enemies.

Even if Wraith King dies, the slow from Reincarnation can help the Twin Head Dragon set up a devastating Macropyre combo. Enemies are then resigned to choose between two unpleasant fates: being turned into bones or ash.