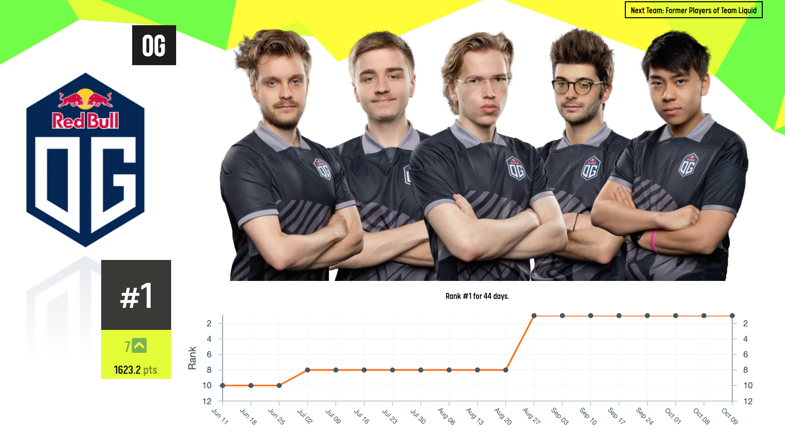 ESL is bringing its Esports World Ranking system to Dota 2. After previously implementing it for CS:GO, ESL will now be introducing the feature to Valve’s other esport.

The priority for the ranking is based entirely on tournament performance, which makes ESL’s World Ranking rather unique. Most of the available ranking tables use the elo system where points are added and deducted based on the matchup and relative strength of each team.

In an elo-based system, a heavily-favored team playing a random qualifier stack will lose a massive amount of points if they’re defeated and gain very little if they win. While it could be useful to determine general matchups, ESL’s paramount focus on tournaments means that a heavily-favored team won’t be penalized for losing such a matchup. Instead, if the team proceeded to run through the lower bracket and win the tournament, they won’t be negatively affected by the surprising loss.

While the table only displays the ranking of teams, the points are actually being earned by the players. Therefore, roster shuffles and player transfers will affect a team’s ranking and points earned.

Points will also decay accordingly, depending on time passed between events. After 25 weeks, points from a tournament placing will disappear, thereby roughly signifying a team’s form for six months.

With The International being the biggest Dota 2 event of the year, it’s not surprising to see the top-six teams at TI occupying the top-six spots on this list. ESL stresses that this isn’t an “end-all-be-all Dota 2 esports tier list,” but the company wants to “contribute and improve the discussion with a very transparent and data-driven approach.”

With most rankings generally focusing on elo, ESL’s new World Ranking might become a more effective way to judge a team’s strength heading into the competition and their likelihood of winning the tournament. Elo rankings will certainly still have their use, especially at judging particular head-to-head matchups. More data and information will certainly help fans and players alike, potentially igniting more passionate and informed discussions.