Ceb, N0tail, and JerAx talk about OG’s run at The International 2018 and the team’s new Red Bull documentary

Almost exactly a year after winning TI8, OG talks about their incredible run. 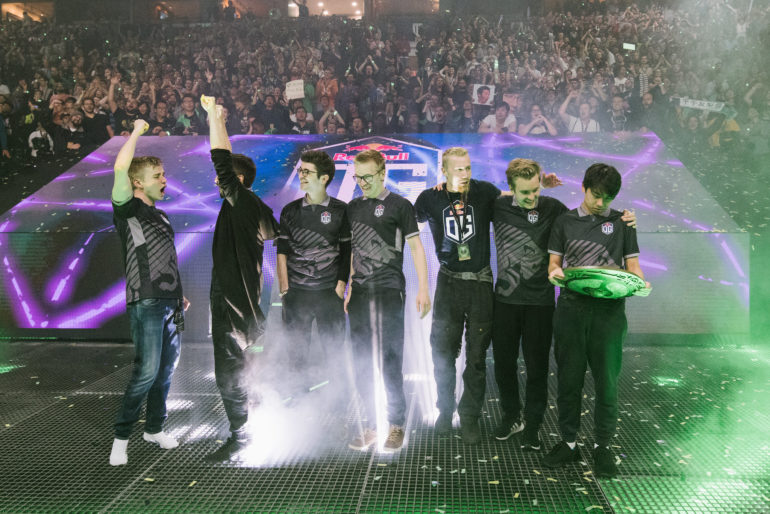 Since forming in 2015, OG has been a consistent presence at the top of competitive Dota 2. Facing a mountain of issues including most of the team leaving the organization right before The International 2018, OG rebuilt on the fly behind their captain, Johan “N0tail” Sundstein, and stunned the world by winning the Aegis of Champions.

That win immortalized the team in Dota history, finally giving N0tail his illusive TI victory despite having to overcome so many obstacles to get there. It was such an incredible Cinderella story that one of the team’s sponsors, Red Bull decided to make a documentary about OG’s TI8 run. The documentary, called Against the Odds, released today on YouTube.

Earlier this month, Sébastien “Ceb” Debs, Jesse “JerAx” Vainikka, and N0tail got on a call with Dot Esports from their training camp while preparing for TI9 to talk about their run at TI8 and the experience of being filmed for a documentary.

After being on such big stages prior to this for competition and other various forms of content creation, how did the whole documentary process feel for you guys? You are used to being on camera, but was the experience different?

Ceb: It didn’t really feel weird but it felt different for sure. I think what was the most different was the fact it went much deeper with all of the questions and the answers. The whole thing was more interesting for us because most interviews focus more on the surface of things. In a way, this documentary worked as a form of therapy for us because of its deep nature, which was cool.

N0tail: The product as a whole is also different because it has so many moving parts and takes so many people to get it done. People are working from different angles during different parts trying to make sure all of the details line up and can help tell a story. Some of those interviews were pretty new to us and it felt a little bit like jumping into water and that felt pretty cool, you know because there was a lot of different history to pull out.

Because this documentary is about your incredible TI8 run that helped cement the team in esports history, is there some specific message you want viewers to take away from watching this or maybe a certain way you hope they will see you after viewing it?

JerAx: Personally for me, I think the most interesting parts of the documentary people getting to see the more human aspects of the team and what we do beyond just playing the game. You really get to see the real-life thing going on there and how important the things outside of the games are for how teams work. A lot of people will just think teams want the best players, but there are a lot of emotions that go into this so how someone does or doesn’t work together, it is a lot of mixed-up things that go into a team’s dynamic.

In the end, this game is as much about the mental things and I think this documentary tackles it to show it is not only us playing but it also human interaction and how it all comes together. That is how the best teams come out.

Ceb: I think another message that is well portrayed in the documentary is how important something like the atmosphere and things that help set players up for a good, strong mental approach to the competition is. Obviously, that is something you can work on by yourself by preparing mentally, but it is also mainly something you get from the team and the people you compete with. I am pretty sure whether you are new to Dota or esports, or even just sports because that is common in sports, the concept is much bigger than esports and it really helps show what is crucial when the stakes get very high.

As you guys are preparing to go to TI9 and compete again, is there one thing in the current meta that is so incredibly different or similar to last year that you guys are kind of latching onto? Obviously, you can’t answer in great detail without giving away some details about your strategies, but there has to be something.

N0tail: Yeah, we obviously have to be careful about what we reveal regarding our thoughts on the current meta, but back then it was a very cool meta. I think the same thing goes for both TIs where it is the same general thing about Dota, which is there are just so many heroes that are viable. The game is so diverse, you have to ready for basically anything, each team very much has their own identity, more so than other TIs hero pools have become centered for certain teams. Now and then, so diverse, so different and you have to be ready for a lot of different stuff.

Going back to that moment you actually won TI8, that moment must have felt so special. Clearly, a win at TI9 will bring some similar feelings back, but do you think anything will ever capture that magic that happened at TI8 again?

Ceb: It is going to be different, I mean it will be different no matter what, whether we win it or lose it or do well or do really bad. When you win there is this very gratifying moment that is really intense, but it is also really short. I think that intensity is something you can get, probably not in that short amount of time but rather as you think back on what happened.

That moment we are never going to relive it, but we are also pretty okay with that because it is what made it that special. The same way that if there is another win to come, it will be unique and special in its own way. Today, obviously, we don’t know how we would feel if we won it again. There is always going to be something unique about each experience that Dota brings us honestly.

JerAx: To me, when I watched the documentary it was a funny feeling because I actually kind of forgot we won TI. And now that I have watched it again I actually realized it happened and it is something that is so special for me personally that I don’t really remember it until I keep repeating it for myself. I haven’t really experienced that with a lot of other things, not really at all, and as Ceb said, it is just such a special moment.

The interesting part is the way we got there and how everything comes together or if it doesn’t come together, whatever happens before and whatever happens there it is going to look different. For sure it is going to feel different, but to me, it is funny that I don’t remember it happening vividly and I always have to go back and say to myself “oh look, it actually happened, yes!”

For each of you, what are you looking forward to the most about going back to TI? Especially now going to China for it, what is that one aspect you just can’t wait to get out of the event?

N0tail: I am sure we all have different things, but something I think we all have in common is the games themselves. Every year, going back to TI are always the most unique games and you always have the teams that are going to underperform, but then you also have the teams that will overperform and surprise everyone by playing super well. I am so excited to hopefully get to be a part of many of those games, as many as possible.

The second thing is the ring. I am so excited to get my ring. Just give me my ring. (The entire call fills with laughter.)

Ceb: If I had to pick something it would be trying to actually enjoy the moment where we get in the booth or any practice room or tournament room game and we just get to sit down and just get in that bubble and close the door behind us. How it will just be the five of us, or the six of us when our coach is allowed, and Dota. I think that moment is very nice.

These days with Dota growing and esports growing you get pulled away from your focus, your Dota all the time and I think that moment no one can mess with your focus. It is easy to overlook those special moments.

JarAx: Also for me, the competing part when you see other teams like really focus and doing their best and you are putting the challenge against them in front of the other people, I think that is what I am looking for. The challenge is what I am looking forward to most at TI. I want to kind of test what we have been learning over all of these years and very recently. I mean we talked about the meta earlier as much as we could really talk about it, but I want to see if our meta is proven to be good or bad or do we have to adapt as the tournament progresses. That is all very exciting to me.