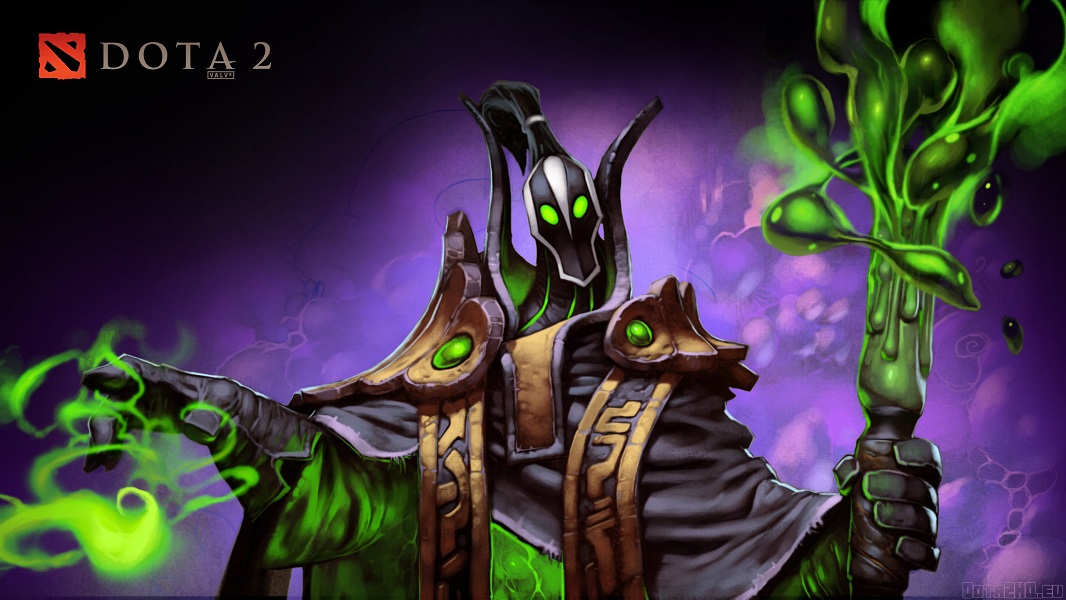 Mostly played as a soft or hard support, Rubick is one of the more complex heroes in Dota 2. His unique spell-stealing mechanic makes every Rubick game different from the previous one, and he becomes a natural counter to heroes with impactful spells from the get-go.

The main reason it’s noticeably more difficult to play Rubick than some might imagine is because he can only steal the last spells his opponent cast, which makes getting what he needs a challenging task.

Rubick’s kit has the necessary tools to sustain himself in lane or prevent his opponents from moving. But like other heroes, he’ll also need to itemize correctly to scale into the late game. Rubick majorly lacks mobility and he’ll need a bunch of mobility items to get in and out of troublesome situations. He’s relatively squishy, meaning he dies quickly when focused, and his Spell Steal’s range may not always be enough to cover his tracks.

Though the enemy team’s lineup will play an important role in how you should itemize Rubick, some items will always be a core part of his build. Buying the following items in their given order shouldn’t give you any disadvantages, but it’ll still be an excellent idea to analyze the opposing team before you start spending your gold. The same idea applies to his skills as well.

There will be times where you’ll need to just get that value point in Arcane Supremacy, but Rubick’s build has clear favorites that you should max out as soon as possible.

Rubick’s first tier of talent upgrades doesn’t offer anything that he urgently needs. Professional players like YapzOr prefer maxing out Rubick’s regular spells until level 15 and only then start leveling up his talent tree. Considering his level 15 talent is a must-have with the +100 range buff, it’s always a better idea to get that prior to the first tier of talent upgrades, which you can still unlock at level 16.

Though most of Rubick’s talents have a clear winner when it comes to the utility they provide, the fourth talent upgrade will be up for debate depending on who you’re facing. A 40-percent Spell Amp to increase your damage output will work miraculously against heroes with abilities like Echo Slam, Black Hole, Finger of Death, or Laguna Blade. If the enemy team doesn’t have heavy damaging spells, getting the -12s Telekinesis cooldown reduction can help your team more in prolonged teamfights.

Depending on your role in the game, there are two sets of excellent starting items that should help you sustain in the laning stage of a match.

Boots of Speed + an Observer Ward + a set of Tangoes

If you’re looking to play the soft support roaming Rubick, you’ll need a head start in terms of mobility. Even if you decide to start the game in the offlane and plan on roaming from there, this setup will allow you to make quick transitions to the middle lane and catch the enemy there off-guard.

The boots start also does wonders while camping runes and you’ll almost always outrun enemy supports to the competition.

The build above doesn’t have enough regeneration to help you sustain in an aggressive lane. If you’re the team’s hard support or simply going up against tough heroes, you’ll need all the regeneration in Dota 2.

You can replace the Magic Stick with more regeneration items if the enemy doesn’t have that many spells to charge it up, but try to hold on to your Iron Branch and Faerie Fires as long as you can. The damage boost you’ll get from the three will let you turn up the heat with your auto attacks, which allows you to make plays.

While the definition of early game may shift depending on the heroes in a game, it usually refers to the timeline between the zero and 20-minute marks. You should already be making your impact around the map before the early game ends. The following items should help you hold your own in teamfights leading up to the mid game.

Those brown Boots weren’t meant to stay like that forever. While there are multiple boot options that Rubick could pull off, Arcane Boots work the best for him due to the extra mana they provide.

Arcane Boots’ active ability is also a great utility source against the enemy team since replenishing your teammates’ mana pool can be a deciding factor between casting a fight-changing spell or dying because of low mana.

Magic Stick is one of the most valuable item pickups you can have in the early game. Upgrading it into a Magic Wand gives you a nice stat boost and also buffs its active ability. Magic Wand will charge up to 20 times with the upgrade, and it’ll always be an impactful item until you run out of slots.

The number of mobility tools you can pick up in the early game is limited. Aside from your boots, your best bet for increasing your movement speed will be picking up a Wind Lace.

Priced at 250 gold, you don’t even have to upgrade it to another item since the extra movement speed is just that worth it. You can alternatively use your Wind Lance while buying an Eul’s Scepter Divinity or Tranquil Boots, meaning it won’t be occupying a slot for itself forever.

This is when things start getting serious. The mid game will tolerate fewer mistakes, so you’ll need to watch your positioning to make sure you don’t get picked off in a way that can jeopardize your team’s chances of winning.

Aether Lens is everything that Rubick needs. The mana bonus and the extra mana regeneration makes sure that Rubick never runs out of juice, while the 250 cast range increase allows him to do his shenanigans from the shadows.

You can disassemble your beloved Arcane Boots to use its Energy Booster and save some costs. Since having two Energy Boosters will be a huge gold investment, picking up a Tranquil Boots to replace it will be more than ideal. The Tranquil Boots will also make use of the spare Wind Lace you’ll have laying around, turning this into a win-win situation.

It’s relatively easy not to allow Rubick to steal your most powerful spells. Any self-conscious player will make sure to cast another spell instantly after a powerful skill.

Rubick players need to get creative to play around this, and the best way to do it is through purchasing a Blink Dagger. A Blink Dagger allows players to jump or blink forward for up to 1,200 units. The item’s active ability allows Rubick to hide and perfectly time when a spell he’d like to steal gets cast.

It’s also an excellent escaping tool since it can be used to hide in trees or simply outrun your enemies.

Aghanim’s Scepter is a costly item for Rubick, but the benefits certainly outweigh its price.

Aside from being an excellent source for extra stats, Aghanim’s Scepter increases the range of Rubick’s Spell Steal and upgrades each spell Rubick steals if they have an upgraded version. This means that even if the stolen spell’s owner doesn’t have an Aghanim’s Scepter, Rubick will apply the Aghanim’s effect on it.

Picking up an Aghanim’s Scepter immediately doubles Rubick’s threat level around the map and makes it even more costly to let him steal valuable spells.

Eul’s Scepter of Divinity is the perfect all-rounder for Rubick. The extra movement speed and an active ability to send enemy players flying is just what Rubick needs.

Telekinesis’ long cooldown may allow some players to escape with a Teleportation Scroll, but Eul’s active will always be there to disrupt their plans. Rubick can also use Eul’s to lineup spells that he steals or use it as an escape tool.

This isn’t a must-pick option by any means, but if you ever find yourself wondering about what item to pick up, Eul’s will always be a solid choice.

There isn’t much of a cost difference between Force Staff and Blink Dagger, but saving up for a Blink Dagger can be a lot harder than it looks. Force Staff is a decent alternative that you can build with three pieces.

It’s also an excellent complementary item to go with your Blink Dagger since two times the mobility will mean two times the trouble.

Lotus Orb is another utility tool that can help your carry heroes shine. Its ability to reflect any spell that’s cast on its effecting target makes initiating a lot more complicated for the enemy team.

It doubles as a Basic Dispel as well, which can revoke “basic stats altering effects like speed or damage bonuses or slows and silences.”

Scythe of Vyse is one of the most expensive items in Dota 2. It’s active ability, Hex, turns a target into a “harmless critter” for 3.5 seconds with a movement speed of 140. The target also gets silenced and can’t use spells while in this form, meaning they’ll need their team’s help to get out.

Rubick should only pick this item up when his team lacks lockdown tools. Scythe of Vyse will allow you to corner out any enemy that missteps or cancel out an enemy hero before they get their spells off in an important team fight.

Rubick’s third spell, Arcane Supremacy, has a Debuff Duration Amplification that also applies to items, meaning the Scythe of Vyse’s active ability will last for 4.9 seconds when Rubick casts it on an enemy hero.

Most of the time, there will be a dedicated Medallion of Courage or Solar Crest carrier on your team. It’s an excellent item to have while taking down Roshan and can make picking up a hero even faster.

The armor reduction effect on both these items qualify as a debuff, and Arcane Supremacy will once again come in handy to make this item even better for Rubick. The seven-second long duration item will increase to 9.8 when Rubick casts it. Since the item has a seven-second cooldown, Rubick will be able to cast it on two enemies before the first debuff expires.

Glimmer Cape is usually a top-tier item for most of the supports since it provides a great level of utility for the price. The brief invisibility duration and the magic resist bonus are key to survive in tough situations.

The only reason why Glimmer Cape is situational for Rubick is because he has more important items to focus on, especially when he’s a soft support. Glimmer Cape is one of the first items you should get as a hard support, however, since your gold income will be significantly less than how much it’ll be when you’re playing as a position-four support.

Introduced with the Mistwood patch, Aghanim’s Shard unlocks an additional spell for heroes, or buffs one of their existing abilities.

Rubick’s Aghanim’s Shard upgrade allows him to cast Telekinesis on himself and his allies. This allows Rubick to use Telekinesis in a defensive way when he needs to, or even a mobility tool at times.

While this item isn’t a priority in most cases, it’ll always be one of the items that Rubick will look forward to pick up as the game progresses.