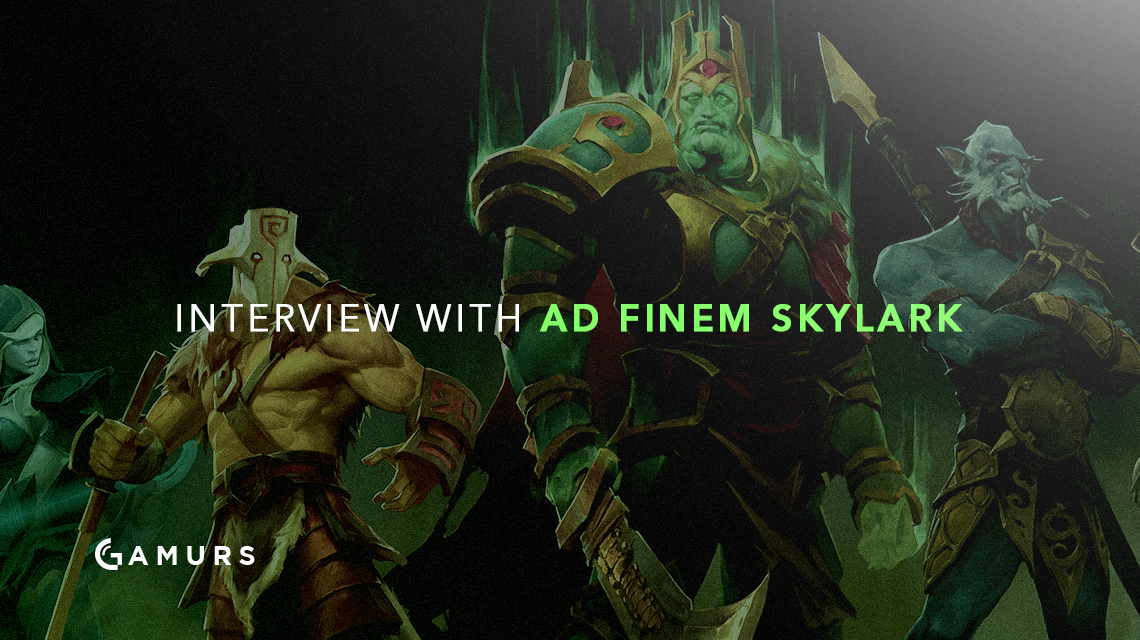 We had the chance to sit down and talk with Haris “Skylark” Zafiriou, the offlane player of team Ad Finem, one increasingly promising team that recently qualified for the Boston Major. Find out more here.

Skylark: Yeah sure, as you know, I am professionally playing DotA 2 for team Ad Finem. I live in Athens, Greece, and that’s pretty much it for me as an introduction.

Does your nickname have any special meaning or significance? How did you come up with it?

Skylark: It’s actually a type of bird that my brother first told me about. He heard it from a Greek song, from a guy, so I kinda stole the name back in the day, but at the end of the day, I’ve earned it, so I’m fine with it.

Have you played any other games competitively before, or just started with DotA?

Skylark: I’ve played a lot of games but not competitively. Even in DotA, I didn’t start thinking I would go competitive, it just happened from one day to another. I joined a team and it all went up from there.

You are part of Ad Finem, a team that has proven that hard work definitely pays off. How did that all start for you?

Skylark: At the start, we had a team with SsaSpartan, Madara and two other players. We tried the team out, we went to LANs and then we basically changed the roster to what players we thought would fit the best. We put MNT and ThuG on the team, so Ad Finem became the team that we know today. We started from small tournaments, as we wanted to become the best, but at the time, there was a lot of hard work to be done; there still is. Then we just went from small tournaments to big tournaments and then to big qualifiers and then to going to the Boston Major.

You have pretty much stuck together, as a team, for a long time now. Did you regret it at some points and think that it would be better to move to an international team for better results?

Skylark: Not really, because everyone saw it from the outside, but what basically happened on the inside was that we knew that we could make it, but we just had to fix something. When you have problems in your team, you have to deal with them, you don’t just run away, go to another team and think everything is fine. We knew we should stay together and we would make it, so that wasn’t on anyone’s mind.

You recently qualified for the Boston Major. How did that feel?

Skylark: It’s the best feeling I have ever had in my life basically. We had a call on Skype and everyone was just screaming. Spartan threw his headset and a keyboard broke. There was excitement all around, a unique feeling indeed.

You are in charge of making some changes in DotA 2. What would you change?

Skylark: The only thing I would imagine to change would be the matchmaking system, but I have no idea how to do that, because if you change one thing, another thing breaks, and it’s really weird. So that’s the thing I would change, even though I don’t know how to. The game itself is pretty balanced at the moment.

What’s your favourite hero in the game?

Skylark: If it’s not Beastmaster – I have a Beastmaster tattoo on my arm – then it is Naga Siren, one of my favourites. But for offlane, definitely Beastmaster.

Is there a hero that you would like to play more, but because of the meta or specific position, you are not able to?

Skylark: I think my first pick would be Beastmaster because he had so many nerfs. I could do so much with this hero, but now you can’t do pretty much anything. I would put him in the meta if I could though.

What are your goals for this year and maybe the first months of the upcoming year, both as a team and as a player?

Skylark: My personal goal is to achieve as much as possible, fulfill my journey and stuff, so that I will have a future in this no matter what. As a team, our goal is to destroy everything. That’s it basically; this is our moment.

Do you have the Greek community’s support? How are things in that field?

Skylark: At the start, we didn’t think that there would be so many fans supporting us. When you play a game and you win, you feel good. When you have so many people behind you, cheering for you, sending you messages like “go win” and other good stuff, then when you win, it’s that much better basically. They are so supportive.

Skylark: The one thing that I learned from this journey is that you shouldn’t give up. When you see a problem, you should fix the problem. Work on it and don’t just run away; that’s not gonna solve anything. If you want to achieve anything great, then you have to keep pushing and keep getting up.

You have to choose your favourite sandwich ingredients. Go.

Skylark: Oh dear.. There would be chicken for sure, mushrooms, onions, some kind of spicy sauce and that’s it I think for a sandwich. Bacon or beef too maybe.

You can spend a day with any person in history. Who’s your pick?

Skylark: I think I would either pick Robin Williams or Jim Carrey, because they basically got some stuff to teach you about life, in my opinion. They’re great characters and I think it would be Jim Carrey for sure.

You are a castaway on a remote, isolated island. You have to choose one DotA personality to help you survive. Who would it be?

Skylark: Definitely not Arteezy, he’s not a captain. He’s not going to get you through it, lead you through it or help you much. It’s just going to be two guys on an island. I would actually pick KuroKy, I think he would help out.

Skylark: Shoutout to my team, and our sponsors: epulze, Tipbet and Dombai. Thank you for having me.

What are your thoughts about what Skylark had to say? Let us know by commenting below or tweeting us @GAMURScom.