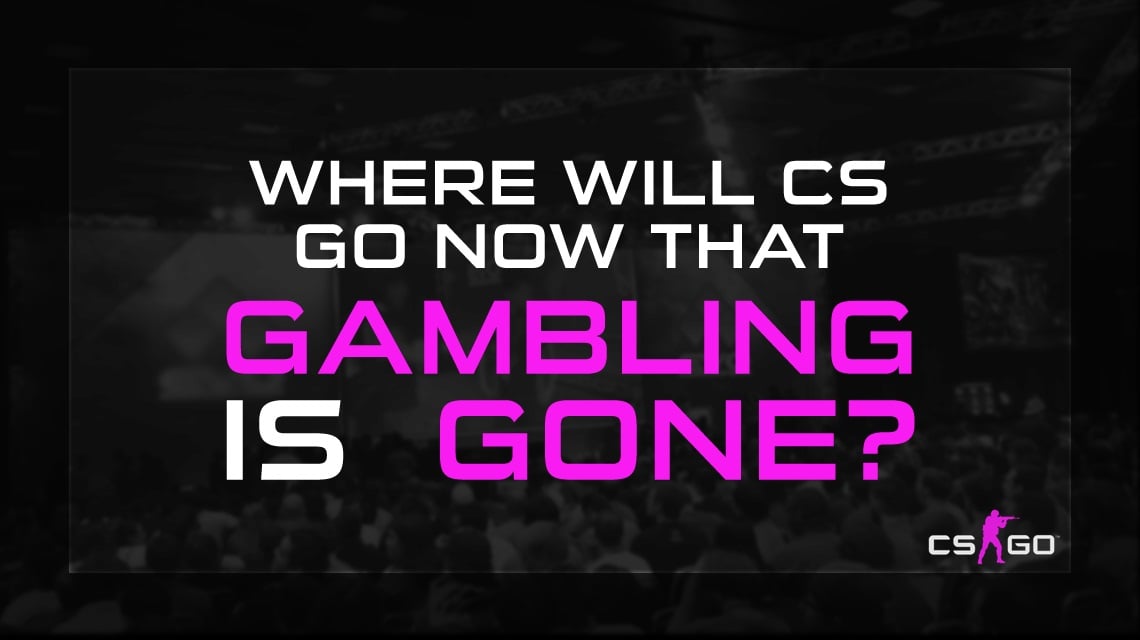 Many people whofollow Counter-Strike: Global Offensive closelyknew that there was something shady about gambling websites. Minorshad easy access to them and were specifically targeted, andstreamers were obviously playing with house money. When the CS:GOgambling industry was involved in a number of scandals, it was nota big surprise. Putting an end to delinquents and bringinggameplay back to Twitch is all well and good, but how exactly willthe loss of the gambling companies affect CS:GO as an esport is abig concern that has not crossed many minds.

Tournaments and teams alike weresponsored by gambling sites. CS:GO Lounge, a site where one couldbet on professional CS:GO matches, owned a team, and that was aftertheir website was part of multiple match fixing incidents. It maybe morally correct to no longer have these companies involved withCS:GO as an esports community and as a community where children arepresent, but there is no questioning that these gambling sites haveprovided a large amount of money to support the game welove.

Many teams will soon fall apartand tournaments will fade away. StarLadder, for instance, wassponsored by CS:GO Fast. Now that they are gone, what willStarLadder do? They cannot invite less teams to the LAN finals andthey cannot make up for it with charging money fortickets.

Look at IEM Katowice. Part ofthe reason why that arena was filled is because admissionwas free. Lowering the amount of people willing and able toattend tournaments would not look good to sponsors and viewers,which brings up another point of arenas. They may be able to helpstop this cascade with smaller arenas, as arenas can be veryexpensive to rent, but that may also show the shrinking of thescene and lead everyone to start calling CS:GO a dead game.Downsizing on the physical event may not be enough, but somethinghas to give.

The way that this will probablyend up is that some teams are going to die away. Small tournamentslike GameAgents, which were almost entirely supported by gamblingmoney, will have to cease operations. Most of the people watchingsuch competitions were either friends and family or people who betmoney on those games anyways.

However, the fact that the CS:GOscene has been inflated by gambling remains. The CS:GO gamblingindustry has provided a way to make the viewers more valuable byproviding a service that many people are interested in and pay for.The sad fact is that the reason why CS:GO has been able to competewith the other esports popularity wise is not for its gameplay butits third-party gambling features. When the loss of gambling moneyis fully realized, CS:GO and competitive shooters will already havesunk down to the depth of esports.

Teams and tournaments will losemuch of their funding and die away, but that is not as bad as onemay think. Teams like Penta will go away but big, successfulorganizations will not. Gambling sponsorships for everyone will goaway, but as big orgs ask their non-gambling sponsors for money,they will see more reason to provide the money to Virtus.Pro thanto a team like Penta because Virtus.Pro is actually going to LANsand showing off the sponsor’s brand.

There is a slight problem withthis to those who appreciate the highest level of Counter-Strike.As small teams fall apart, it will be harder for up-and-comingtalent to filter up into the top teams because there will be a lackof a platform for such players to show off their abilities. Leagueslike ESEA Premier have provided a place where a young player couldlearn the basics of how to play on a team, so when a weak and agingplayer needed to be replaced, there were options. Now, it will beharder for such teams to find the talent they are looking forbecause teams supporting and motivating these players through sucha grind will no longer exist.

When talking about losingsponsorship, many say that they will quit because of a lack ofmotivation. However, the best teams and players do not quit. Theteam that is now playing under Virtus.Pro has not always had stablesponsorships. Many a time Filip “NEO”Kubski and Wiktor “TaZ” Wojtas had toplay on their unsponsored team AGAiN, yet they managed to be thebest. The best teams and players will still be around, it will justbe a bit harder for them.

Viewer count is perhaps thegreatest concern of CS:GO fans. A number of people believe thatmost of the viewers of big tournaments like ECS and the Majors arethere to see how their bets turn out. If not that extreme, thensuch a concerned person is confident that gambling is somethingthat makes the games more exciting and interesting to many peoplewho would not have been drawn to watch the games otherwise, andthey would not be wrong.

It is true that wagering moneyon the outcome of a match can be very exciting; it not only testsone’s knowledge, but it adds an emotional aspect to a gamewhen it may have been lacking one. Without gambling, CS:GO willexperience a drop in viewer numbers during day-to-day operationsand at the big events. After all, there were streamers and viewerspurely interested in gambling who dominated the Twitch CS:GOsection.

Unfortunately, we are forced toreflect on the status of our beloved game. Is the only reason thatCS:GO got as big as it is because of gambling and not the gameplay?Is CS:GO nothing more than a cockfight where the players arenothing more than fodder and we who take it seriously aredelusional idiots? I donot think so.

I think that there is value anda high level competition in competitive esports such as CS:GO. Wehave never needed the approval of others to enjoy our favoritepastime, video games, and just because some fellow gamerstrivialize our favorite game does not mean that we have to submitto such notions. What are a few uninterested gamers compared togovernments and hordes of angry parents?

All that matters is that youenjoy yourself. If some other people enjoy it with you, that isgreat, but it is not the end of the world if they do not.Counter-Strike will survive this bubble as it has before, and forany doubters who say that it will not survive and that ESL OneCologne 2016 was the last Major event, then at least we have beenable to enjoy ourselves for the time that it has beenaround.