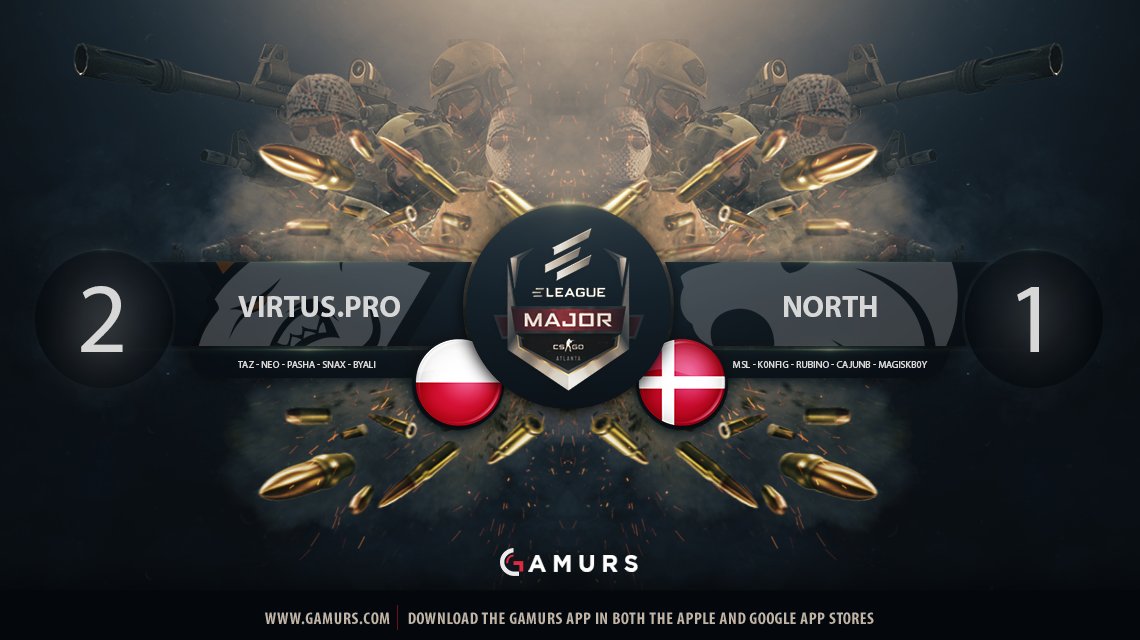 The third and last quarterfinal of the night saw Polish powerhouse Virtus.Pro take on the rising Danes of North.

The map veto went as follows (courtesy of HLTV.org):

The pistol round had Virtus.Pro challenging North in connector. A rapid flurry of frags left three on North dead almost immediately, with the round being quickly polished off by Snax as he dropped Magisk with a quick headshot and took a slice out of k0nfig. The Poles quickly garnered rounds aided by a one-on-one clutch from neo, an anti-eco ace from Snax, and a two-on-four retake by Snax and TaZ. In the most dominant map of the major thus far, Virtus.Pro absolutely decimated North – only forfeiting the last round of the half for a 14-1 halftime score. A harrowing half for cajunb, who didn’t pick up a single frag in the first 15 rounds.

Virtus.Pro, not known for being kind to their opposition, tightened their grip on North’s throat by winning their T-side pistol round, leaving them just a single round away from closing out the map. North replied with three rounds of their own, but their fate was already sealed – Virtus.Pro closed out the map on their next gun round with ease to end the match 16-4.

North, eager to prove that they could still be competitive in this series, opened up Cache by winning the initial four rounds. They suffered an upset, however, as Virtus.Pro won an eco round via a B rush. VP was able to chain its eco round win into four more rounds until North finally answered back with a round win of their own. VP traded another round back, but two saved rifles from North allowed them to buy up and defeat Virtus.Pro’s aggression in the following round. In a phenomenal recovery from Overpass, North claimed a 9-6 victory for the first half.

North didn’t stop their reign of terror from the previous half – a beautiful read from MSL had North pushing A on their pistol round, a site which VP was playing retake on. North won the pistol round in the post-plant, and cleaned up the ensuing anti-ecos. Virtus.Pro replied back on their first gun round, but were immediately reset by North, who picked up the following round courtesy of two important entries by MSL. North dealt with VP’s eco round easily, but once Virtus.Pro’s players got guns back in their hands they garnered five unanswered rounds. North, refusing to go down without a fight, chose to close out the game and picked up the final two rounds to win 16-12.

Magisk continued right where he left off on Cache, picking up a pistol round ace to secure North’s first CT round. Virtus.Pro’s ensuing force buy failed, allowing North to once again take a 4-0 lead. VP, just like on Cache, replied back with a round of their own, albeit with a force buy this time around. Unfortunately for Virtus.Pro, North shut down the following gun round, and had no trouble dealing with the force buy that followed. North picked up yet another round, MSL and Magisk grabbing two frags apiece to continue their spree. Virtus.Pro traded back a round of their own, but as per the pattern, were immediately reset – they only picked up one more round in the half, as North closed it out 12-3 with Magisk dropping 29 frags in 15 rounds.

Pasha helped Virtus.Pro win a much needed pistol round, grabbing three frags for himself to keep his team in the game. Virtus.Pro also cleaned up the anti-ecos with minimal losses, but fell to North in the first gun round; fortunately for the Poles, they not only were able to reset North – Virtus.Pro then ran the game all the way back, chaining together 10 rounds to absolutely annihilate North’s offensive half and claim victory over them despite their initial 12-3 half.

Did you expect Virtus.Pro to make that comeback? Can they win it all? Let us know your thoughts in the comments below or tweet us @GAMURScom.