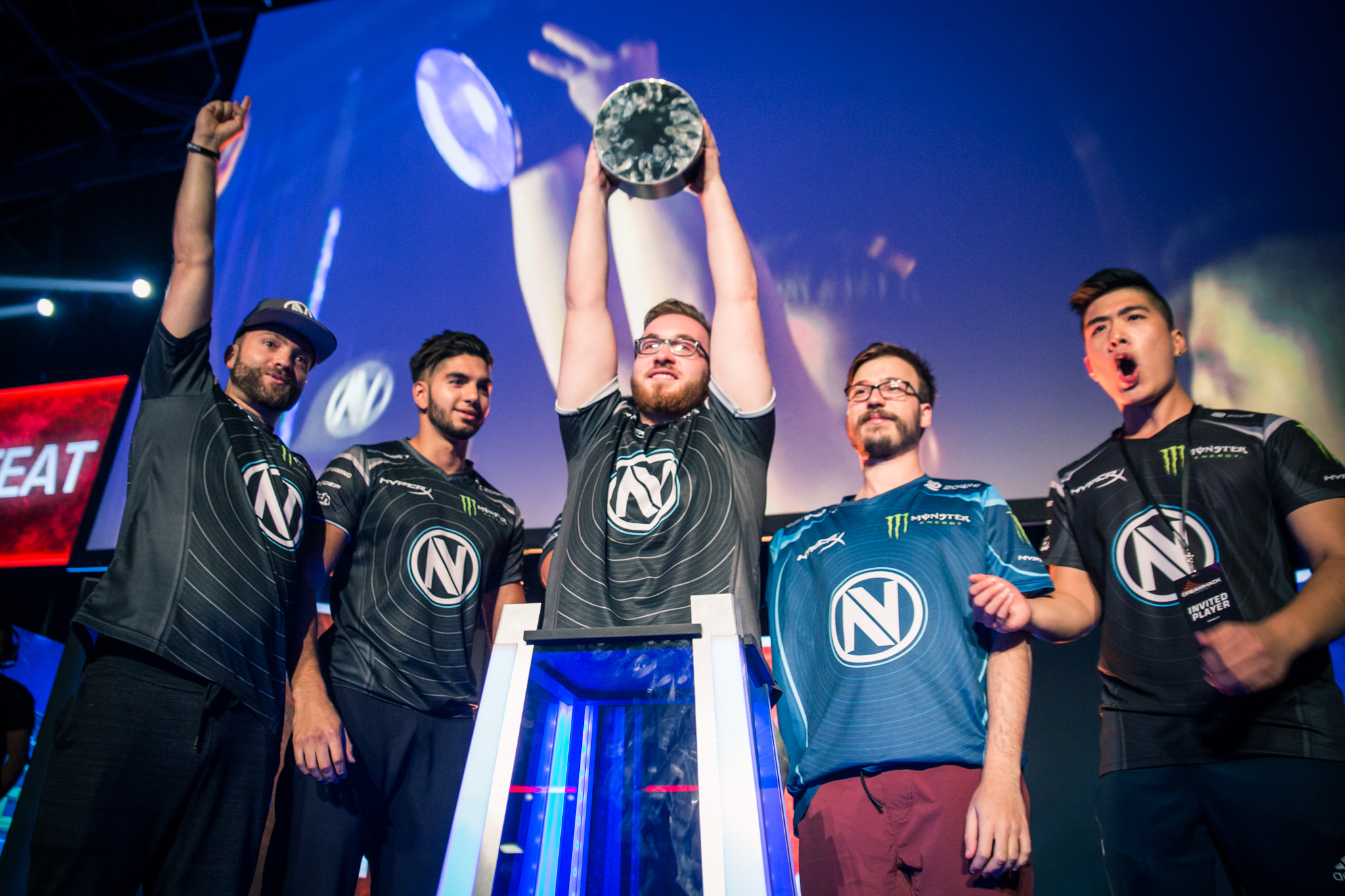 The current Team Envy roster has its narrative defined entirely on two fronts. On one hand, you have those focusing on the rebirth of form in veteran Cédric “RpK” Guipouy and how he is leveraging this to give nV a chance in series. On the other hand, you have the overall disappointment of this nV roster as the whole. With names like Adil “ScreaM” Benrlitom and Vincent “Happy” Cervoni Schopenhauer, most pundits are very critical—and rightly so—of their disjointed team dynamic and confused philosophy as a side.

These driving stories though, neglect a key underlying narrative and at the peril of mischaracterizing nV as the whole. The story of Alexandre “xms” Forté and how important he has been within nV is critical to understanding Envy and can’t be overshadowed. To simply just lump all the attention about nV on Rpk and the overall failings is doing a massive disservice to the role of xms and his immense development on this team.

Xms is the only player on Envy who doesn’t bring a well-known name or history, making it easy to overlook his impact. Even Christophe “SIXER” Xia has a deeply-rooted 1.6 background which flaunts top four placings at big international events with Millennium in 2009. Yet, despite his name being easily read over or ignored on-paper, in-game, xms demands your forthright attention with a pedigree or otherwise. To appreciate xms, however, you need to look at the general overview of Envy’s T-side, which is where he does his best work.

Envy’s T-side is a tricky, deeply nuanced and caveat-ridden puzzle to solve as an analyst. Xms’ role on the T-side of Envy is not. Happy’s calling style is infamously recognized—and to a degree, generalized—for its unique centering on Happy’s lurking role. In reality though, this style is becoming more and more a tired adage for ill-informed Envy narratives. The actual Envy T-side revolves around three players: Xms, ScreaM and Rpk.

While the roles between these three are very flexible, essentially, xms is the hard entry, ScreaM is the second or third man in and playmaker, and Rpk is the plug-and-play positional star. Xms is an incredibly proficient entry-fragger, and is the undeniable key to Envy’s consistent T-side success.

Rpk is exceptional at playing certain areas of the map and creating pressure individually in Envy’s defaults or mid-round calls. In specific spots like drop on Cobblestone and top banana on Inferno, Rpk wreaks havoc as Envy’s most consistent, star-like force. Likewise, ScreaM will often be sent to try and work crazy individual plays to open up a round—his green train rush on Train being the most notable example. While these more individually focused plays allow Envy to score the occasional shocking upset T-round, it’s xms who is the workhorse of their standard executes, contact site hits, and transitions into map control.

Without xms, there’s no way Envy’s T-side could function nearly as efficiently as it currently does. Statistically, this idea is represented perfectly. On LAN with the current lineup, with both teams on a gun-round and nV on T-side, xms has 46 opening kills with the next highest being Rpk at 37 and Happy at the lowest with 20. When rpk or xms find an opening kill, Envy win the round 70 percent of the time.

While Rpk and Xms’ numbers are the same in a percentage sense, this doesn’t take into account the difference in resources they receive. Many of Rpk’s opening kills come from finely practiced positions, which can be seen in the example below. “We really focused on RpK… I think Rpk has been our best player, or most consistent player throughout 2017,” Happy said in an interview with HLTV.

Xms, on the other hand, is often just sent to hard-entry onto sites behind a simple flash overhead, pop-flash through smoke, or just straight contact. And he is damn good at this job—despite the difficulty it entails. He has precision crosshair placement and great quick aim to take follow-up duels, often resulting in double-entries and guaranteed round wins. For a player with not a glamorous or heavily focused upon job, he is doing work.

Contrast his with ScreaM, who often finds many openings in isolation from individual plays, which is reflected in the stats. Of ScreaM’s 31 opening kills, Envy only win the round 58 percent of the time—a far-cry from the 70 percent of his two other fragging-core members. This is indicative of a player working picks separate from the team and in duels of his own.

Although Rpk and ScreaM might be the bigger names, xms is very much the grinding force of Envy’s T-side. While ScreaM is off losing individual duels to lower-tiered European riflers and rpk is being fed the attention that periods of form warrant, xms is doing his work in the trenches. While he might not be capable of regularly turning around disadvantages in clutch scenarios or mid-round calls, send him onto a site with a rifle in hand and chances are he will find the opening to win the round. For a team like Envy who try to push an individual-focused T-side philosophy, xms is one of the few players doing his job at an above-required level and with consistency. He is the French foot soldier sent over the top to take an enemy position regardless of risk, and he does it without praise every single time.

The same though, cannot be said for his CT play. While his proclivity for aggressive duel-taking has been tooled and perfectly integrated offensively, defensively, these same attributes can become points of weakness. On Envy’s best and most played map, Cobblestone, xms plays plat. He will often try to take deep plat control solo early in the round or take individual duels as they come near broken wall. These forward positions are routinely punished or quickly traded. This is representative of xms’ general aggression and an extension of Envy’s T-side individualism into the CT-side.

“[The] new game plan, new strategies, [relies] on players not making mistakes, and playing really well individually,” Happy said in an interview with HLTV at ESL One New York. This puts Xms, as the youngest and least experienced player, in a tough spot on CT-side. He’s expected to make an individual impact in very difficult areas of the game and more-or-less on his own. This is clearly reflected in his stats on CT side. While most of the average to above average players in the world have a damage difference of +10 up to +25, xms comes in at +2.2 over the last six months and only in second-tier LANs.

The blame isn’t totally on xms for these numbers, despite the latent issues within his style for CT-side play. He will often be sent with a large job like, “anchor B late round” as the youngest and most inexperienced player on the team. This is largely because rpk and ScreaM on Envy’s CT-side are working overtime to bolster their lack of on-site teamplay with taking individual duels across the map. There is no room on this nV roster for xms to be dutifully taken under the wing of a veteran and hand-held on a site. While this doesn’t totally make up for his lack of damage output, it at least helps to paint a picture as to why this might be the case.

Xms truly is the unsung hero of this Envy roster, and given the context around his role, his actual performance in-game and the total lack of attention put on him publicly, he could be seen as one of the more underrated players in the world. The coach is more focused on improving Rpk’s game and refining his positional play, and Happy is focused on trying to build back up his own game through designing a system that allows him to do such. ScreaM is a player that seemingly requires everyone on the team to be playing at a high-level for his own game to rise, and SIXER is a streaky primary AWPer.

In the mix of these clashing narratives and overarching issues, xms is quietly doing his job. He’s walking out onto sites, winning Envy advantages that snowball into regular round wins while struggling to find his place on a toughly designed French CT-side. His story might not be one that will dominate any talk about Envy’s failures or success, but that doesn’t mean you can dismiss his crucial role within the side and the power he could potentially bring to future teams.