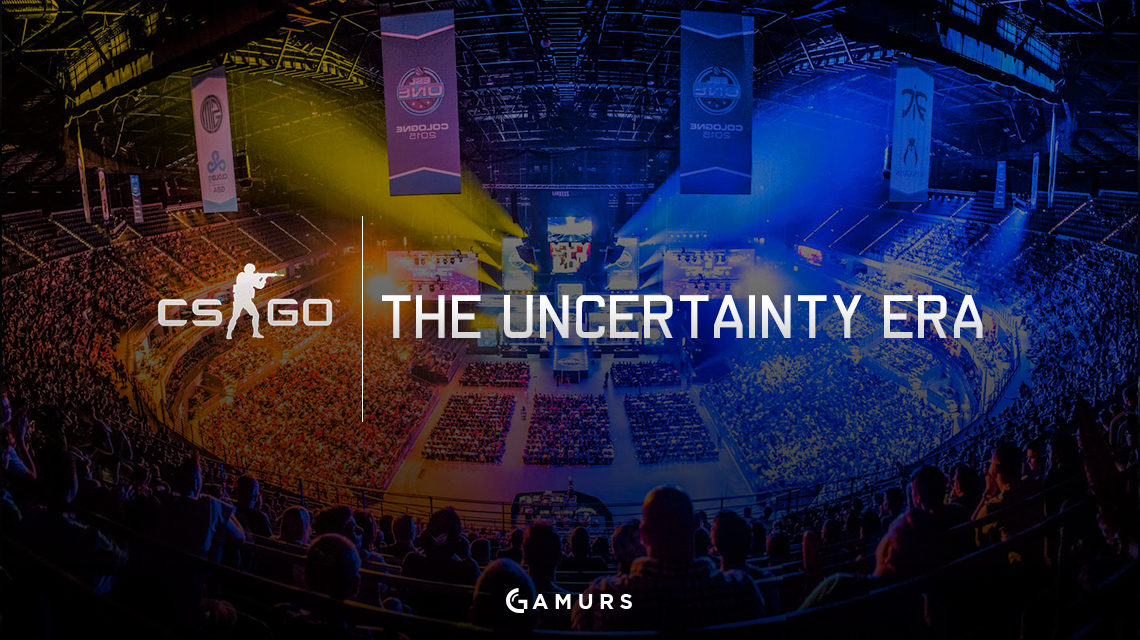 Upsets and ambiguity are not new to Counter-Strike. Ostensible world-beaters have frequently fallen in the semifinals or finals to upstarts or overachievers. Once strong rosters with huge on-papers potential, like NiP in the past or Astralis now, can consistently fail to find the results that “should” have been within their grasp. While we are certainly not stuck in some clichéd void where absolutely “any team can win on any given Sunday,” a lack of consistency amongst top teams and the diminished presence of the world leading SK Gaming roster has made the last three months of professional play unprecedentedly variable and indeterminate. If this post mid-year paradigm continues, history could certainly call the present period, with hindsight’s clarity, “The Uncertainty Era.”

Era nomenclature in Counter-Strike is usually determined by the winningest team. In Global Offensive, the earliest professional play starting in 2012 is fondly remembered as Ninjas in Pyjamas’ legendary period of dominance. In their early offline tournaments, which, to be fair, were smaller and far less competitive than our current weekly monstrosities, NiP accumulated an unbelievable 87 map win-streak as they acquired and retained the pinnacle position in the scene for nearly two years.

Their dominance first started to fade in the run-up to the very first Valve major, DreamHack Winter 2013, which would take place in late December of that year. At that time, VeryGames’ Richard “shox” Papillon and Kevin “Ex6TenZ” Droolans led-lineup, NiP’s longtime rival,  finally looked poised to overtake them as the world’s best team. VeryGames would defeat NiP in the finals of ESL Major Series One – Fall 2013, the semifinals of Electronic Sports World Cup 2013, and would win MSI Beat IT 2013 where NiP was not in attendance. At that first major, VeryGames would not complete the coup d’etat, losing to NiP in the semifinals, but NiP’s loss to their rival Swedes in Fnatic still effectively ended the longtime dominance, even if NiP would continue to lead the scene for several more months.

By mid-2014, NiP started to seriously slump and started to lose any semblance of control over the scene as had middle of the pack placings throughout the summer. While NiP would still win the next major, ESL Cologne 2014, in miraculous fashion, over the next six months a series of tournament victories by LDLC and a newly formed Fnatic, with Olof “olofmeister” Kajbjer Gustafsson and Freddy “KRiMZ” Johansson, would become the era defining leaders. Fnatic would win FACEIT League – Season 2, ESWC 2014, and Fragbite Masters Season 3 before LDLC would win the last major of the year, DreamHack Winter 2014, and the first big tournament of 2015 in MLG X Games. Then, Fnatic would win the first major of 2015, Major ESL One: Katowice 2015, before LDLC-now-EnVyUs answered with wins at Gfinity Spring Masters 1 and StarLadder StarSeries XII.

NiP’s drop in the middle of 2014 led to the era of two dueling champions in Fnatic and LDLC/EnVyUs that would last nearly a year.

Fnatic perhaps only started to become the clear cut number one after EnVyUs’s fall in the summer of 2015, where they had a series of lukewarm results as perceivable tension in the team started to develop. On July 20, they would swap out Shox and Edouard “SmithZz” Dubourdeaux in favor of Kenny “kennyS” Schrub and Dan “apEX” Madesclaire, which would lead to a more firm Fnatic dominance in the second half of the year.
Fnatic would win ESL One Cologne 2015 and continue to look like the world’s best team, but a poor showing at the DreamHack Open Cluj-Napoca 2015 in August led to internal friction and the departure of Markus “pronax” Wallsten in November. With Dennis in the lineup in place of pronax, Fnatic would hang on as the world leading team in late 2015 and early 2016, with Na’Vi and Luminosity starting to more closely challenge the long-time dynasty.

It was perhaps only Luminosity’s victory at MLG Columbus and the ESL Pro League Season 3 finals that officially dethroned the long-time Swedish leaders. And, besides their slip-up versus TyLoo at DreamHack Malmo, Luminosity/SK continued to impress at other high-stakes contests, placing second at the ECS finals behind an in-form G2 team, and winning another major, ESL One Cologne 2016, in July.

Nevertheless, in the three months since this victory, SK has little to shore up their self-named era. While little could be done in the July late to mid-August break of tournaments, SK attended zero LANs in September due to the health issues surrounding their long-time teammate Fernando “Fer” Alvarenga and looked very unspectacular online while playing with Gustavo “SHOOWTiME” Gonçalves as a stand-in, even losing an embarrassing 16-0 to Renegades in late August. Surprisingly, the return of Fer still didn’t revolutionize online results as SK lost versus OpTic in the iBUYPOWER Fall Invitational in mid-September, though online results are known to be a poor indicator of actual strength.

SK was finally able to play again on LAN at ESL’s most recent tournament in New York this past weekend, and looked like they were up to their old ways in the Swiss-style opening of the tournament. They won three of their first four matches to secure their appearance in the playoffs, only losing to Na’Vi on Mirage along the way. However, in their semifinal match versus Virtus.pro, SK would play another extremely close match which neatly mirrored their previous semifinal bout in Cologne. This time, SK would win an overtime game one, lose a quadruple-overtime game two, but would finally fall thanks to a 16-7 loss on their own dicey Nuke pick in game three.

A semifinals loss versus the recently resurgent Virtus.pro is hardly some pathetic era-ending result, but the inactivity of SK in the second half of this year in addition to the uneven, unpredictable results of the rest of other upper-end contenders has significantly warped the prevalent milieu of the Counter-Strike: Global Offensive professional scene. Unlike the previous eras, which were usually dominated by a combination a Swedish and French teams or the initial Brazilian period of leadership, the ambiguity seen thus far in the second half of 2016 could deprive this period of a titular dynasty.

The murkiness experienced recently extends beyond the relative lack of a single dominant team. The variable results of other world leading contenders in Virtus, Na’Vi, and NiP, alongside the disintegration or partial reconstruction of internationally competitive teams such as Fnatic, GODSENT, Mousesports, and EnVyUs, have also added to the apparent opacity.

The worst two offenders of this high level inconsistency comes in the form of Na’Vi and Virtus.pro. At the beginning of the year, Virtus.pro looked like they could finally be at the end of the rope with this long standing five man roster as their stunningly poor online performances prevented them from qualifying for many offline events, but they have looked significantly improved since the start of the summer. At the major, they had a decent result by making it out of groups and besting the double stand-in laced Astralis to make the semis, but their win in the ELEAGUE Finals was clearly an impressive, highly laudable result.

However, after the break, they have either been superlative or subpar. They bottomed out at StarLadder i-League StarSeries Season 2 after losing two straight maps before winning DreamHack Bucharest 2016 outright a week later. While ostensibly their following victory over SK and second place finish in New York may make their StarSeries result look more like an aberration, it shouldn’t be overlooked that VP very nearly failed to make it out of the Swiss-style groups. Virtus.pro went 3-2 and only barely clinched the playoff spot with a 16-14 victory over OpTic thanks to numerous victories in late-round scenarios.

Fellow Eastern European team Na’Vi has shown a similar inconsistency. After a series of sliding results and a drop in the world rankings, Na’Vi decided to drop Danylo “Zeus” Teslenko in favor of a difficult but extraordinarily talented player in Oleksandr “s1mple” Kostyliev. Since the pick-up of the supposed superstar, Na’Vi has only competed at two LANs, StarLadder i-League StarSeries Season 2 and ESL One New York, with very dissimilar results. Almost exactly like Virtus.pro, Na’Vi bombed out of the StarSeries LAN after losing two straight maps, but they too would made the finals in New York, only Na’Vi would defeat Virtus.pro to claim their own tournament victory.

But these two highly inconsistent contenders are just the most extreme examples. While NiP has looked somewhat improved with Björn “THREAT” Pers coaching the team, NiP has hardy become world beaters in recent memory. Yet, they would go on to win a highly competitive but upset-prone StarSeries LAN with a stand-in, the first premier event victory with a stand-in the history of CS:GO. Other contenders, such as Cloud9, Mousesports, Dignitas, G2, Immortals, and EnVyUs, are also still lurking around in the foray, apparently capable of finding results against each other and the more elite teams in the world, but none of these teams have been able to nail down a consistent series of top placings.

This prolonged period of uncertainty can be ascribed to a few key factors. First, the emergence of SK as the world leading team could have helped facilitate some of the recent roster changes in formerly top end teams such as Fnatic, Na’Vi, and mousesports, with rumors of a French shuffle coming up recently due to the addition of Christophe “SIXER” Xia and the departure of Timothée “DEVIL” Démolon from EnVyUS. There is also the highly controversial Valve coaching rule change, which limits the effectiveness of out-of-game coaching, which was increasingly becoming utilized in place of a standard in-game leader in 2015 and 2016.

But the less perceivable and more speculative suggestion has been the notion of increased international parity. The emergence of upper level Brazilian teams and the newly apparent upset makers in Asian squads such a TyLoo could likewise increase the unpredictability of results by adding additional squads on the level of formerly dominant European squads.

Whatever the reason, the coming months will soon determine the identity of this era. If SK do not reclaim their in-jeopardy era, or if the inconsistency of emerging contenders such as Virtus.pro, Na’Vi, and NiP continues, the uneven, erratic results seen thus far in the second half of 2016 might make “uncertainty” the go to descriptor for this era.

What do you think best defines this era of Counter-Strike? Let us know by commenting below or tweeting us @GAMURScom.