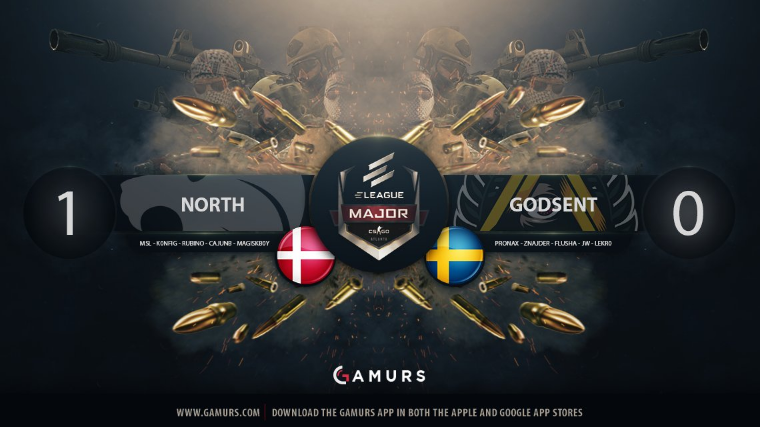 The last round of group stage play at the ELEAGUE Major kicked off with North playing GODSENT on Overpass.

The first round of Overpass began with two inital kills by GODSENT’s Lekr0 and pronax, but some great refrags by k0nfig and cajunb allowed North to secure the pistol round with relative ease. North then strung together the following four rounds – Magisk winning one of those single-handedly for them, as he aced GODSENT while the team was doing an eco round. Flusha answered back by grabbing three kills to get GODSENT their first round, and continued to lay waste to North in the following two rounds by grabbing five frags for himself. A clean anti-eco put GODSENT just one round away from North, but a well-played two-on-three from Rubino and cajunb allowed North to pull ahead by two more rounds. However, North were crushed on GODSENT’s eco round thanks to JW picking up a 4k with his saved AWP. The rest of the half went to GODSENT, with JW and flusha picking up a 3k-round each.

An inital trade in the second pistol round had North and GODSENT in a four-on-four very early, but a 3k from Magisk granted North their second pistol round win. The ensuing anti-eco and first gun round also had Magisk picking up three kills per round, saving North from an early reset. A force buy from GODSENT proved fruitful as the team struck back, forcing North into an eco round – a round which they proceeded to win, thanks to pistol frags from k0nfig, Rubino, and MSL. GODSENT immediately replied back with a round win of their own, forcing North to save the two rifles they still had alive. That saved proved to be crucial, as it allowed North to convert the next round, forcing GODSENT into an eco round and putting North up at a 13-10 lead. An intense buy round followed, wherein cajunb clutched a one-on-one versus pronax to put his team one round away from match point. Another force buy from GODSENT allowed them to reply back, with flusha and Lekr0 grabbing two crucial frags apiece to keep GODSENT in the running. The next two rounds also went to GODSENT, putting immense pressure on North to win their next buy round – if they didn’t, GODSENT would tie up the game at 14-14 and North would be on a save. Fortunately for North, they did pick up that crucial gun round. However, only one player survived, and North still faced an extremely late reset if they didn’t close out the game. GODSENT made that nightmare a reality by winning their 14th round of the game, and flusha closed out regulation time by winning a one-on-one versus MSL, grabbing yet another three-kill round.

The first round of overtime had North and GODSENT trading frag for frag, eventually ending in a one-on-one post plant for znjader, who had only two healthpoints. Unfortunately for him, k0nfig crept around his smoke to pick up a knife kill, despite only having one healthpoint himself. The second round was traded back by GODSENT, with Lekr0 picking up three kills, but North closed out the half in the lead courtesy of a stellar 4k B site hold by Rubino.

Lekr0 and JW helped GODSENT reply back almost immediately in the second half of overtime, picking up two and three frags respectively to lock down the B site. The game didn’t remain tied for long though, as North once again traded a round back to secure match point in the second half of overtime. The final round of the match had North putting heavy pressure on A, and GODSENT crumbled – North secured the win with a scoreline of 19-17.

North have achieved legend status, and GODSENT have been knocked out.

Did you expect North to win this nail-biter? Let us know in the comments below, or tweet us @GAMURScom.