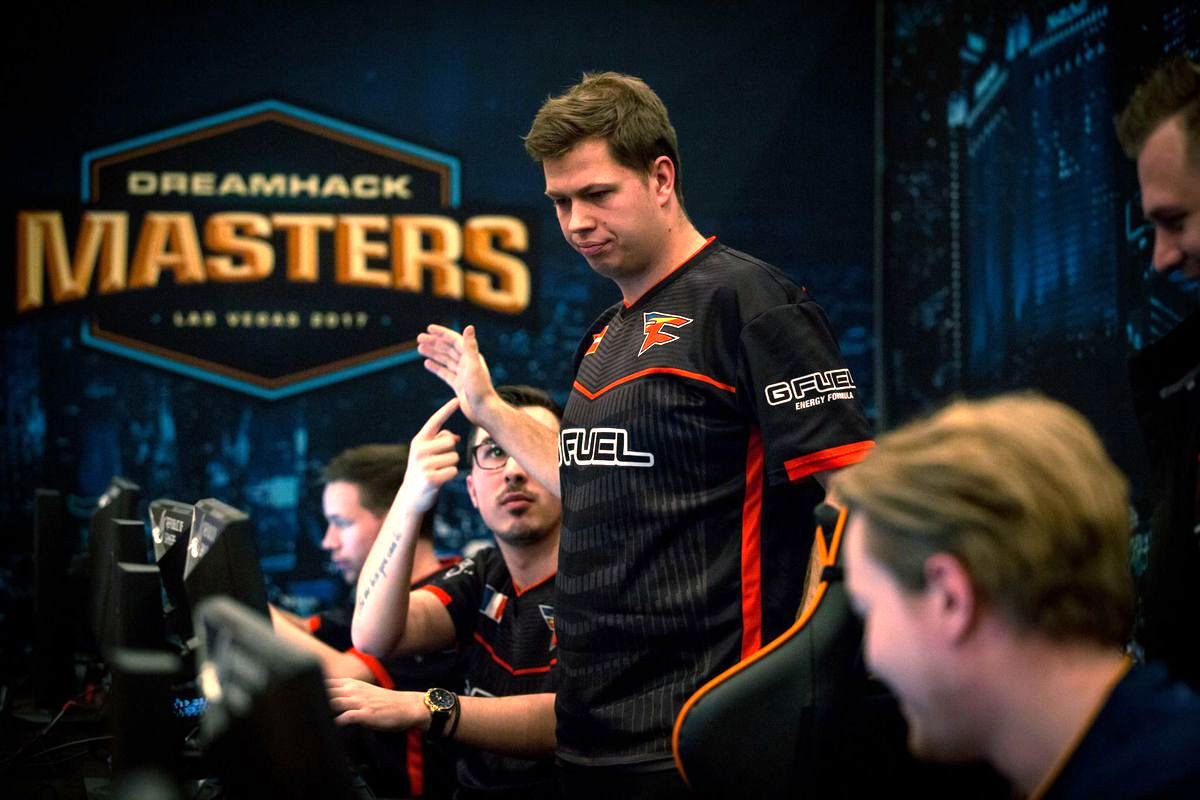 The Sith — the deformed, dark cloaked rulers of the Star Wars Universe— had a singular governing principle: the rule of two. The entire organization had to consist of just a pair of members: the master and the apprentice. One to have the power, and one to crave it.

Astralis has been the best team in the world since December last year, but now FaZe firmly contends for that title. The would-be Danish Dynasty was challenged before by the likes of SK, OpTic, and Virtus.pro but none lasted long enough to complete the overthrow. And all three coincidentally crumbled in the aftermath.

FaZe is different. When the mind body binary of Astralis split last October, the team’s firepower reformed with Lukas “gla1ve” Rossander at the head, while Finn “karrigan” Andersen adopted the capable but often uncoordinated appendages of the international mix team.

Both teams noticeably improved immediately after the swap, but Astralis led and FaZe followed. Both made it to the semifinals of IEM Oakland, but Astralis made it to the finals of ELEAGUE Season 2 while FaZe was again stopped in the semifinal on the opposite end of the bracket. Then, at the ECS Season 2 finals, Astralis won the event in dominating fashion, while FaZe couldn’t make it out of Group A, which featured both OpTic and Astralis.

FaZe, like everyone else in the scene, had to look up to Astralis. They were the perpetual favorites, the best team in the world, the de-facto ruler of the Counter-Strike cosmos. However after Vegas, FaZe ceased to bend the knee. When Aizy left for North following the major, they didn’t simply grab another good player, such as their DreamHack Master stand-in Joakim “jkaem” Myrbostad. They picked up one of the absolute best players in the world, Nikola “NiKo” Kovač. And there hasn’t been a ceasefire since. Astralis and FaZe have met each other deep in the playoffs of three straight tournaments in grandiose, grinding contests.

In February, many casual commentators were actually arguing that Virtus.pro was the best team in the world. While Astralis had a much better record in the final two months of 2016, fans argued that VP “should” have won the major and “proved” they were the better team at DreamHack Masters Las Vegas. For Astralis, IEM Katowice seemed to be the perfect opportunity to definitively overcome the Polish side once they inevitably met them late in the tournament.

FaZe’s expectations were more muted. NiKo played his last LAN with mousesports little more than 10 days before the tournament. While the addition of this monster talent surely had to be a boon for FaZe in the long run, short-term stumbles would hardly be surprising at this early stage.

Despite this divergence in exceptions, both teams strongly stood out in Group A’s six team round-robin style competition. They each went 4-1 to advance into the playoffs, with Astralis defeating FaZe in the head-to-head matchup on Train, but FaZe actually finished the group in first due their tiebreaker win over the Danes. Once separated in the playoff bracket however, they each ensured a reunion. Astralis defeated both Na’Vi and Heroic in 2-0 best-of-three series in the upper bracket while FaZe only had to breeze past Immortals with their first place advantage to meet in the grand finals.

Because IEM Katowice used the rare best-of-five format in its finale, this contest had a significantly different consistency than the latter two series. FaZe issued their typical Cobblestone ban while Astralis banned Mirage, presumably out of respect for the international mix’s strength on that map. FaZe picked and won opening choice of Cache, the only map outside of Cobblestone where Astralis is not a top team worldwide. Then, Astralis won their own home map, Overpass, to tie up the series.

Now, all that was left was more-or-less even contests on Nuke, Inferno, and Train. Regardless of FaZe’s impressive start, however, they were not ready to overtake the scene leader. Astralis ground out wins on the next two maps, 16-12, 16-13. Even with consistently strong performances from FaZe new star, NiKo, and a very good second showing from the team’s AWPer, Allu, especially on the Nuke and Inferno, it just wasn’t enough.

The combined output from a wide cast of strong players inside their highly refined system gave Astralis the clear edge. Now, it’s true that Nicolai “dev1ce” Reedtz had an off finals (as he is want to do) but Andreas ‘Xyp9x’ Højsleth was the difference-maker in this series. Xyp9x capped off one of the very best tournaments of his career with a fantastic finals performance, having great output with his typical positionally perfect clutches and superb support play.

IEM gave FaZe their first finals appearance since picking up Karrigan in October, but their ascension was still far from certain. Perhaps this was a fluke run in the chaos of the new addition. Perhaps, like OpTic in December, their upswing was a very temporary uptick in form. Perhaps they would have a harder time once other squads had an idea of their style and strengths. Still, FaZe had to have entered Starladder i-league StarSeries Season 3 with a hope getting even with the Astralis.

It was hard trip back up to the top. Starladder had the most stacked field of any tournament assembled thus far in 2017. North America’s CLG, Korea’s MVP, and the Chinese squads of UYA and TyLoo squads looked to be a soft underbelly, but the tournament contained all eight of the presumed tier one teams of this supercharged era with Astralis, Virtus.pro, SK, Fnatic, North, Na’Vi, G2, and FaZe themselves alongside some of the best tier two teams at the time in Gambit, HellRaisers, Immortals, and NiP.

With the added difficulty, Astralis climbed while FaZe crawled. Astralis won three of their four games in the swiss with just a single loss to North in overtime before advancing into the next round. FaZe’s escape from the preliminary stage was tighter, going 3-2 instead, which fed into a noticeably harder bracket draw. Astralis had to face CLG and Na’Vi to make the finals, while FaZe had to bypass G2 and HellRaisers to do the same. But destiny demanded another clash between the pair. Victories from both side rolled in to set the stage for a rematch in the finals.

This go round was played out through the standard best-of-three methodology, which allowed the two sides to be far craftier in their approach to the veto phase. Both teams almost always ban Cobblestone first, so instead both teams banned the the other side’s clear advantage with FaZe vetoing Overpass and Astralis removing Cache. The resulting pick/ban left both sides on extremely even playgrounds. In fact, Astralis defeated FaZe on their own map pick, Mirage, while FaZe responded in kind on Nuke. The series went down to an even closer overtime closer on Infero. Astralis worked wonders breaking into the B site over and over to abuse FaZe’s double AWP, but FaZe won all the tight late-round scenarios on their own T-side to take the tournament. They now stood stand toe-to-toe, eye-to-eye with the clear best team in the world, the curse of the competitive scene.

While dev1ce and Xyp9x stood tall for Astralis, a surprise MVP-level performance for Fabien ‘kioShiMa’ Fiey was the difference maker for FaZe this time around.

IEM Sydney: The Return of Cobblestone

While the loss to FaZe and their former in-game leader must have stung, Astralis had done all of this before. Astralis had lost their first contest versus SK when they faced them two times in a row at IEM Oakland and ELEAGUE Season 2. They did the same with OpTic losing their first contest versus the North American team in the finals EL Season 2 finals, before coming back again at ECS Season 2. Then, Virtus.pro emerged. Astralis defeated them by a slimmest of margins at the major, before losing a rematch on the exact same maps DreamHack Master Las Vegas. But Astralis always overcame. When SK, OpTic, and Virtus.pro were all collecting group stage exits in March and early April, Astralis stayed at the very top, winning tournaments and never finishing below top four. FaZe was just another pretender. Sure, a hate sprung from an earlier love, but they were still no major champion, no six month scene leader. IEM Sydney was the place where the paradigm would play out again, where the circuit would complete.

Astralis surely had no conception of the very meta, mental match that was to come.

IEM Sydney was smaller, much less stacked eight-team tournament. SK aside, the growing shadow of the FaZe versus Astralis spectacle was large enough to eclipse all other competitors. After each team won their opening game of the swiss, the pair met once again for a best-of-one in the second round. But instead of going to any of their shared picks, both teams kept delaying their typical Cobblestone ban round after round until FaZe actually chose to ban Train with their final veto sending both team to their permanent ban. Once in the server, Astralis won a fairly standard nine rounds on the T-side in the opening half, but there was something peculiar to FaZe’s own offensive as the game continued. Despite public assertions or suggestions that FaZe had been practicing the map for a month in case of this exact scenario, their takes and executes looked bizarrely half-hearted, even attacking the B site a few times with very little utility. Astralis won seven of eight rounds in the second half to win the game and reassert themselves against their newest rival.

After defeating North in the third round of the swiss, Karrigan said in an interview his side purposefully didn’t play at full strength versus Astralis, “I think the gamble paid off on having the feeling about how they play on the T side, since I decided not to show anything when we were down 12-6 on the T side of Cobble. So if I play Astralis again, I feel very comfortable in the veto.”

Astralis and Gla1ve didn’t buy the story. In a separate interview with Dot Esports, Gla1ve said he believed, “Karrigan is definitely lying—nobody is hiding tactics from when you are behind 12-6, that would just be stupid.”

Both sides once again progressed through the tournament, but this time they met in the semifinals. Immediately, Astralis called Karrigan’s “bluff.” They choose Cobblestone first with their first pick with the firm belief they were the better team on both side’s shared weakness. However, to their shock, FaZe won a devastating 12 rounds on their T-side in the first half, now fully utilizing their playbook. Astralis fought back valiantly winning ten rounds themselves in the second half, but FaZe were still able make it over the line, winning 16-13. Losing their own pick was calamitous, but Astralis again defeated FaZe on their own Nuke pick to send the series to a third map. FaZe clearly outshone Astralis on Train to win the series outright, however.

FaZe lost to SK in the finals, but this victory over Astralis was no small feat. FaZe might not be the best team in the world yet, but this version of Astralis had never been eliminated by the same opponent two tournaments in a row. No team had ever taken two best-of-three series off of Astralis, period.

FaZe usurped the master. Astralis have a very defined, fundamentally strong style, a true super star in Dev1ce, a great supporting cast, and fantastically wide map pool. But FaZe can still overcome that. With a looser system, they can match and even surpass Astralis with their own superstar, their own diverse supporting cast, their own ample map pool.

It’s a fantastic story. Two teams born through the creation of one another are vying for the ultimate position in this substrate of cyberspace. The game, the scene itself is beautified by the creative destruction of the conflict, but it’s also simpler than that. It’s friends turned enemies, the teacher versus the student, the leader versus the follower, the new versus the old. And now, it’s the centerpiece of competitive Counter-Strike.