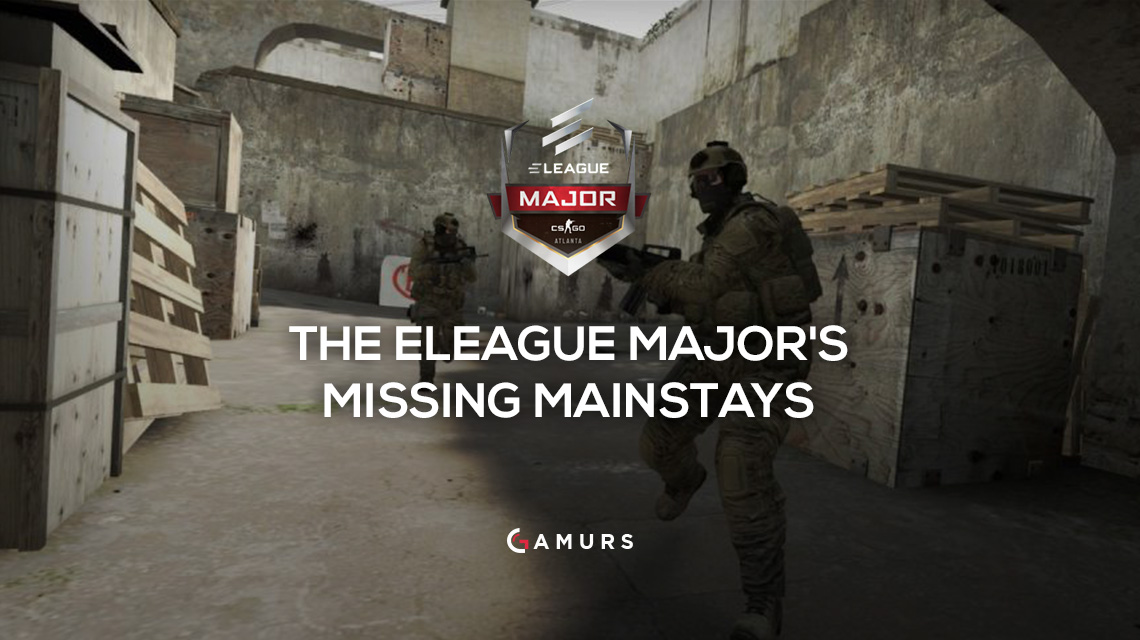 Since ESL One Cologne, the Counter-Strike: Global Offensive competitive scene has faced unprecedented levels of uncertainty and parity, as a myriad of teams have risen and fallen off in the oversaturated, weekend to weekend slugfest we call an esport. Going into ELEAGUE’s Jan. 22 Valve Major, Astralis has emerged recently as a clear cut favorite, and other contenders, such OpTic Gaming, FaZe Clan and Dignitas, now called North, have become somewhat of known quantities over the past few months, but amongst some of the most prestigious and revered teams in the scene, there are still several massive clusters of dubiety.

Due to the holidays, a light tournament schedule in the run up to the major, and their own lack of participation in past tournaments, both Virtus.pro and Natus Vincere have not been active over the past couple of months, veiling the strength of both sides. Conversely, SK has played in many of the recent premier-level tournaments, but they have similarly become obscured as a roster change has reshaped them, and will presumably continue to alter their identity in the pre-major preparation arms race.

All three teams in Virtus.pro, SK, and Na’Vi were arguably the best team in the world at some point or another in 2016, but for the biggest tournament in nearly six months, and perhaps the most highly anticipated tournament of all time, there is a gaping opacity in expectations. Where have they been and what can we expect from them?

Virtus.pro started off 2016 with horrendous online results and unimpressive LAN finishes as they often faced tough competition too early in tournaments. However, after they were eliminated by SK Gaming at ESL One Cologne, Virtus.pro suddenly appeared to be the best team in the world after they won ELEAGUE Season 1 and kept their foot on the floor as LANs started up again in September.

Despite a poor post-break start at StarLadder i-League StarSeries Season 2, they tore through DreamHack Bucharest to find another first place finish, and cemented their world leading-status by placing second at two straight tournaments: ESL:One New York and EPICENTER 2016. However, when the competitive scene most needed an era-defining team in its highly chaotic post-Cologne state, they vanished.

In apparent preparation for ELEAGUE’s prize pool-rich finale, VP pulled out of IEM Oakland and attended no other event in November. Nevertheless, their ELEAGUE performance only further obscured their prowess moving into the new year. Despite perhaps coming in as favorites to Turner’s tournament, they immediately lost a best-of-three to still unproven FaZe in the first round of the playoffs.

While the absense of SK certianly helped their intial rise, Virtus.pro found a better overall level of form with their five man roster with different segments of the team stepping up in key moments, but they also made key inroads in their map pool to secure their breif, defacto leadership.

Virtus.pro was one of the earilest adopters of the new Nuke, a very dicey pick initially, which famously backfired on them in the semifinals of ESL One Cologne. However, in the back half of the year, the map became more reliable and played more frequently with Virtus.pro becoming one of the best teams in the world, if not the absolute best team, on the map. They also continued to be a quite capable Cobblestone team, which became an increasingly valuable pick as the map gradually fell out of favor amongst the top teams over the same period.

But with Virtus.pro exiting the scene during the past two months, its hard to say how they will fare with Overpass seeing much more high-level play and if theirTrain can hold up versus the likes of Astralis, OpTic, and perhaps even the new SK. While Virtus.pro does seem to have a reliable system in place across their map pool, it’s frequently been the case over that their success in the short term very much depends on form, and without much tournament play from Virtus.pro in recent months, it’s difficult to access what kind of form they are in.

Now, VP is currently competing at the WESG 2016 World Finals, which features a $1.5 million prize purse, but very limited competition, which means it will still be hard to establish VP’s actual strength. At the moment, there is just not enough relevant data to assess the plow, so despite their obvious mettle in the second half of 2016, they have to be considered an unknown quantity going into the major.

While they may not have been the world’s leading team in post-Cologne state of the scene, SK was still clearly very much near the top following their lengthy abdication from the LAN circuit. They racked up top placings in tournament after tournament, but their peculiar dismissal of Lincoln “fnx” Lau and temporary pickup of Ricardo “fox” Pacheco has demonstrably distorted expectations for the would-be contender.

The post-summer SK Gaming was not particularly different from the one that stood atop the world, playing with the same players, in same roles, in the same system, demonstrating very similar strengths. They still very much benefited from their stranglehold on Train, becoming the clear number one team in the world on the map. They also had famously strong team play in mid-round scenarios, and had one of the best, if not the absolute best, double AWP setups in the world with Gabriel “FalleN” Toledo and Marcelo “coldzera” David. Both strengths make their CT-side exceptionally strong, frequently winning rounds after a poor T-side to somehow just wring out a map win. However, from October onwards, these distinct advantages hardly seemed like qualities that would invariably put them in a dominant position. Now, they felt more like crutches propping up an obviously slumping team.

Amongst inconsistent individual performances and dwindling proficiency on their former go-to maps, SK could still do well at tournaments, often winning earlier playoff series in close fashion, but they still would invariably fall to an elite, or flavor of the week, team in the finals or semifinals.

In their first tournament back, they lost to Virtus.pro in the semifinals of ESL One New York, and lost to them again in the EPICENTER semifinals. SK then had the perfect opportunity to take a tournament win at the ESL Pro League Season 4 finals, which took place on home soil in São Paulo with Virtus.pro not in attendance. But still, they were dispatched in the finals by a suddenly surging Cloud9. The same story repeated at IEM Oakland, where they again made the finals but lost to an on-fire Ninjas in Pyjamas. And the last vestige of the old SK seemed to crumble in the ELEAGUE semifinals when the soon-to-be world leading Astralis defeated SK on Train, snapping their 17 game, six month LAN, win streak to take the series 2-0.

Following their ELEAGUE performance, SK decided to drop Fnx amongst long-standing rumors of internal strife. SK chose the Portuguese Fox to stand in for the team until after the major in a highly criticized decision. Fox had been Kinguin, G2 and FaZe’s primary AWPer for a good portion of  2015, and the quality of his teamwork was reputable, but he had never been seen as a competent individual performer, which led to his removal last August.

To be frank, in a team that includes Fallen and Coldzera, who are far better AWPers than Fox, the inclusion hardly seems worthwhile, and he did not perform well when using a rifle at the ECS Finals in his first and only appearance with the team thus far. While SK still was able to make the semifinals, against somewhat lackluster competition, they did not play Train as they presumably needed more time to play the more preparation-intensive map.

With only the ECS Finals to observe, there is limited information on SK’s new five, and SK is obviously liable to evolve through practice during the extended break in the run up to the major. It’s certainly possible that Fox could be properly integrated into their system, SK could recalibrate themselves on Train, and the team might be able to somewhat re-find their form on the CT side, but from what we have seen thus far, the Fox stopgap looks firmly like an ineffective measure. While there are still unknowns abound, it seems far more likely that the old SK era will continue to fade into the pages of history, as we may see a non-elite SK at the ELEAGUE Major.

Looking back in history, it’s fairly easy to associate the December 2015 round timer and bomb timer extensions as an event that helped quicken the end of the Fnatic era and bring about SK’s more relative dominance in mid-2016. But, like SK/Luminosity, Na’Vi started a very noticeable rise to form as their very patient, grinding T-side seemed to agree with the change. However, initially, it looked like Na’Vi, rather than Luminosity, would be Fnatic’s heir as they took home tournament wins at DreamHack Leipzig and the Counter Pit Season 2 Finals in the early months of 2016.

However, that hope started to flatten at MLG Columbus, as their then world-leading AWPer, Ladislav “GuardiaN” Kovács, looked fairly mediocre throughout the tournament due to a hand injury. Na’Vi still accumulated some strong results in the immediate aftermath of the injury, including a second place finish at the major itself and another silver showing at DreamHack Malmö shortly thereafter. However, they started to heavily teeter off as they moved into the summer with Guardian never finding a good, consistent level as he recovered from his injury.

Na’Vi did not qualify for many tournaments in the run up to the next major, as they did not advance through to the online portion of either ESL Pro League or ECS, and their performance at the major itself was not especially impressive. They placed just  top-eight at ESL One Cologne and top-four at the preceding tournament, ELEAGUE Season 1. Apparently feeling the falloff, Na’Vi decided to make a long clamored-for roster move. They added the troubled, but surpassingly talented Oleksandr “s1mple” Kostyliev, while dropping their former in-game leader Danylo “Zeus” Teslenko to form perhaps the single most skilled lineup in the world.

However, in a rough reversal of fate, Valve’s coaching rule change, which would come into fruition just two weeks after S1mple’s pickup, mostly removed Sergey “starix” Ishchuk’s ability to lead from the coaching position, which was especially disabling with Zeus no longer in the lineup.

Na’Vi tried to soldier on in the second half of the year with a less structured system, but they were extraordinarily inconsistent as one might expect. With their new roster, they bombed out of their first tournament together, StarLadder i-League StarSeries Season 2, in last place, then won ESL One New York outright in the immediate aftermath over the presumed best team in the world, Virtus.pro.

Many commentators started to have high hopes for the highly talented squad, with S1mple looking like the absolute best player in the world, after their performance at EPICENTER, where they again found a highly respectable top-four finish. Yet further group stage dropouts at ELEAGUE Season 2 and IEM Oakland, hardly incite confidence as we inch closer towards towards Jan. 22.

However, like Virtus.pro, Na’Vi has hardly seen action in recent months, with their last LAN appearance being almost two months ago in mid-November. While the new lineup clearly has a lot of holes — an unreliable system, highly off-peak individual performances from its secondary stars, and a nearly-non existent map pool — there is again a vague possibility that Na’Vi will enter the major more refined with a fresh repertoire after an extended break. And while the from-nowhere comeback does admittedly seem doubtful, there is something to be said about a team backed by perhaps the single hardest-hitting hard carry in the world, S1mple, who famously lugged a similarly troubled Team Liquid to two huge over-performances in both Valve majors last year.