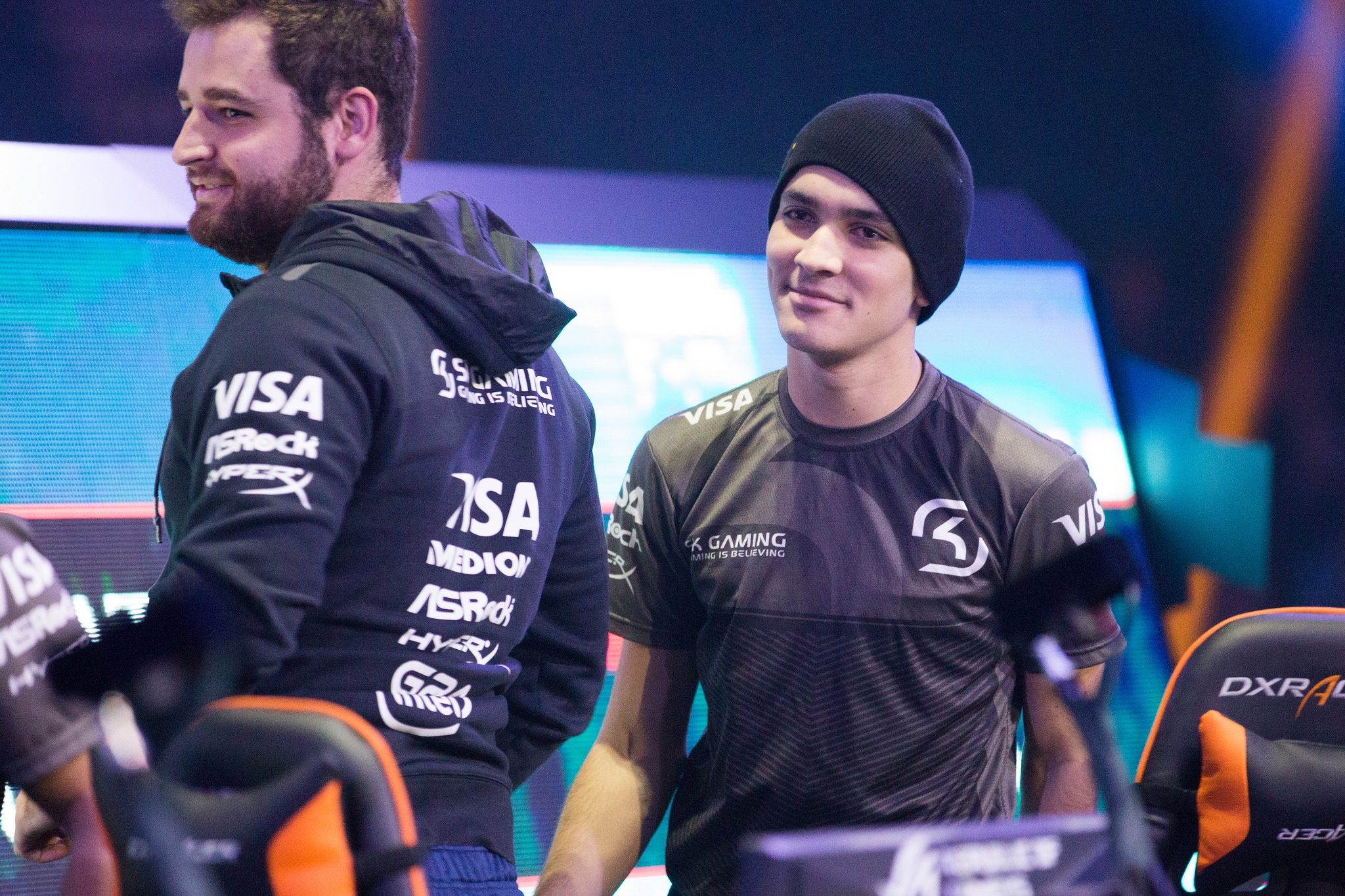 SK Gaming’s supremacy over the entire Counter-Strike: Global Offense scene in 2016 did not continue after their win at ESL One Cologne in July. When they returned to tournament play after an extended break, losses mounted as their pool shrank and their rivals, namely Virtus Pro, took the upperhand—yet even after their fall SK were able to create a much narrower, but almost equally remarkable legacy. They exerted an extreme, almost unprecedented, stranglehold over a single map: Train.

With Lincoln “fnx” Lau still on the roster during the “uncertainty era,” SK won 10 straight maps on Train, adding to an already very impressive seven game streak. Only the emergence of a new world leader in Astralis could end this six month-plus run. In their very last appearance as a five-man lineup, SK lost to the Danes 16-12 in the semifinals of ELEAGUE Season 2 last December. Afterwards, they were understandably imperfect on the map with Ricardo “fox” Pacheco in the lineup, yet even after SK rebuilt themselves this year into a global contender with João “felps” Vasconcellos, they have hardly reclaimed their former prowess. With their present roster, SK are only 4-4 on Train.

So what’s the issue?

The addition of felps is the obvious entry point, as we know his presence has had a pronounced effect on SK. The Brazilian team’s style of play has generally become more aggressive, with the action of the team more dictated by their new aggressive rifle duo in Fernando “fer” Alvarenga and felps. As such, fer has looked like the team’s secondary star behind Marcelo “coldzera” David, rather than Gabriel “FalleN” Toledo, who has not nearly been as impactful with the AWP this year. SK has also been more inconsistent. While they have had some very good placings, they were also eliminated in the opening stage of a tournament for the first time in almost a year at IEM Katowice, and were astonishingly eliminated once again in their very next LAN appearance at Starladder i-League Star Series Season 3. Likewise, their map pool has been radically reconfigured. Instead of relying on Overpass and Train, as they did heavily at the end of last year, SK has instead shifted their focus towards Mirage, Cobblestone, and Cache.

But SK did not shift away from Train haphazardly or preemptively. They were forced away from it. At DreamHack Masters Las Vegas, they won their very first offline try on Train over Na`Vi, but lost on it versus Virtus Pro in the finals when it was their own map pick. They didn’t get a chance to play it during their short stay at IEM Katowice, but lost on it two more times to the new leading Train teams in Astralis and FaZe in Starladder’s swiss. With a 1-3 record on the map across their first four showings, their failure to recapture their dominance on Train cost them the DreamHack Masters Final and very much pushed SK to elimination at Starladder Season 3.

But SK’s new relative mediocrity on Train shouldn’t be understood as simply the consequence of the broader difficulties SK faced since bringing in felps. When SK proved to be one of the very best teams in the world again at cs_summit, IEM Sydney, and the ESL Pro League Season 5 Finals, their Train performances were still up and down. Sure, they have looked better recently—beating OpTic, Gambit, and most notably FaZe—but they still have lost to two very mediocre teams on the map over the same period: Cloud9 at cs_summit and EnVyUs in overtime-esque tiebreaker of EPL. In contrast, over these three tournaments SK has racked up a 4-0 record on Mirage, a 4-1 record on Cobblestone, and a 7-1 record on Cache with both of these losses coming from a very good, surging team in G2. Surely there are some map-specific considerations at play.

Broadly, it makes perfect sense as to why Train would originally be in Luminosity/SK’s wheel house. Train always been seen as tactical and teamplay-heavy map due to the multiplicity of angles and entry ways on the A site. Strong tactical teams can reap huge advantages with swarming T-sides, while the most coordinated teams can conversely rebuff the opposing offensive at rates that far exceed the average competitor. When fnx was still in the lineup, SK was very frequently described in terms of the strength of their “system.” Under the leadership and tutelage of FalleN, the team developed into one of strongest mid-round teams the game has ever seen. Each player understood his role and how to react in any scenario far better than the average alternative. Accordingly, their “system” synergized nicely with Train’s specific style of play, especially on the CT side, but SK’s extreme success on the map also had a lot to do with their original approach and individual strengths.

While Epitácio “TACO” de Melo had always generally been seen as SK’s weakest player, he very frequently exceeded expectations as the team’s primary B site defender on Train, even looking like the best player in the world in that position at times. Similarly, the team’s best player and one of the best players overall, Coldzera, could also hold the critical ivy position on the other side of the map with notable proficiency. Add in the aggressive AWP play from FalleN outside holding T-con and the combination of fer and fnx holding ladder room and the left side of the site, and you had some of the most dominant CT-sides the map has ever seen. If the offensive was not stuffed outright upon arrival, the Ts still had to weather the defining mid-round prowess of SK, which made the Brazilians the best team in the world. Over their 11 Train games during the Uncertainty era, SK won an almost unbelievable 101 of 129, or 81.5 percent of rounds while on defense. When SK started on the CT side, they could even affect near shutouts such as their 16-0 and 16-1 wins at EPICENTER over G2 and Virtus Pro respectively.

In contrast, their T-sides were only decent to good, winning 72 of 132, or 54.5 percent of rounds over these same 11 games. Their offensive style was something almost reminiscent of the alt-rock Jumbo-dynamics of the Pixies, later popularized by bands such as Nirvana in the early 90s. It’s all about alternations between loud and quiet with little-to-no transition in-between. On one hand, SK could immediately or rapidly execute out of A-main or the B-ramp, while they also conversely pioneered a devilishly patient double AWP strategy with FalleN peaking and prodding into A site with Coldzera holding pushes or doing the same on the opposite side of the map. This black/white approach could get often get SK a perfectly acceptable 7-9 T-rounds per half, but it could also get SK into trouble, especially at the end of their run together as a five-man lineup. For example, in their final loss versus Astralis, SK only won three T-rounds across the entire opening half.

So what went wrong with the addition of felps?

First of all, on the CT-side setups obviously vary. For example, when Coldzera has an AWP on the CT side, he often helps TACO hold B by controlling the B-halls, with FalleN moving back in A to hold ivy instead. In the same vein, when a secondary B defender was called in a single AWP or full rifle round, fer would typically be the A player to rotate over. But when felps came in to replace fnx and fox, felps rather than fer has become the permanent forward A player, with fer more often positioning himself behind him more towards the bomb train. Yet it is still fer, rather than felps, that rotates through Z to the inner site when needed. While fnx usually moved forward towards ladder, E-box, or T-con to replace fer when he went to B, the positioning of the A players now tends to be slightly more forward but also more brittle with felps almost always staying in an advanced position.

This change also puts fer in a less advantageous spot in general, per his strengths as a player. For example, if an execute came through from both the ladder room and ivy, and say felps and Coldzera were traded 1 for 1 in the initial contact, FalleN, TACO, and fer would be the ones left to play out the subsequent three-versus-three now, while it would have had been fnx in the mix instead of fer before. Yes, fer is perhaps the better player, but fnx has always been more respected for his positioning and late-round play in contrast to fer’s more straightforward aggression.

SK’s T-sides have been even more affected since departure of fnx, however. The addition of another aggressive rifler in felps has perhaps shifted the balance of their loud/quiet or quick/slow dynamic too far in one direction. Just as they done elsewhere, the fer and felps combo has been set up more to make initial contact, with less double AWP-based rounds. And this shift has only been exacerbated by the change in the overall metagame towards force-buys and AWPless low-buys via the increased popularity of the UMP. Also, even more broadly, the development of stronger competition in the “parity era” simply means that there is going to be a lot more skill on opposing CT-sides to rebuff SK’s more aggressive advances.

Now, from IEM Sydney forwards, we have seen SK make some small adjustments that have helped them regain their mojo. On CT, TACO rather than Coldzera has been sometimes holding the B-halls when the team moves to a double AWP setup, which prevents any weakening of ivy. On T, we’ve also seen SK try to utilize ivy more themselves, which they curiously seemed to more-or-less ignore in the past. And with the damage nerf to the UMP, there is some guarded hope that UMP-backed force buys will eventually become less frequent as players adjust in the coming weeks and months, which could in turn help reinvigorate SK’s classic double AWP setups.

That said, with the personnel they have now, it still could be an impossible feat to modernize their winning concoction on either side of the map, especially with SK now looking like the world leader, or a near world leader, on three entirely different maps. With their focus split, they probably can’t allocate the time and effort necessary to recreate their former back-breaking greatness. But here’s the thing: they don’t have to.

The Luminosity/SK roster of 2016 is not the SK Gaming of June 2017. Alongside a player and coach change, they have a different map pool, they are facing new opponents, and they are functioning within a warped metagame. While there is something magnetic about the successes of the past, perhaps SK would be better off directing their ambitions forward. They still have a great system and a robust core of storied players. They could win another major. They could dominate another era. They don’t have to beat back the present to re-win MLG Columbus or start another extended win streak. That train has already left the station.