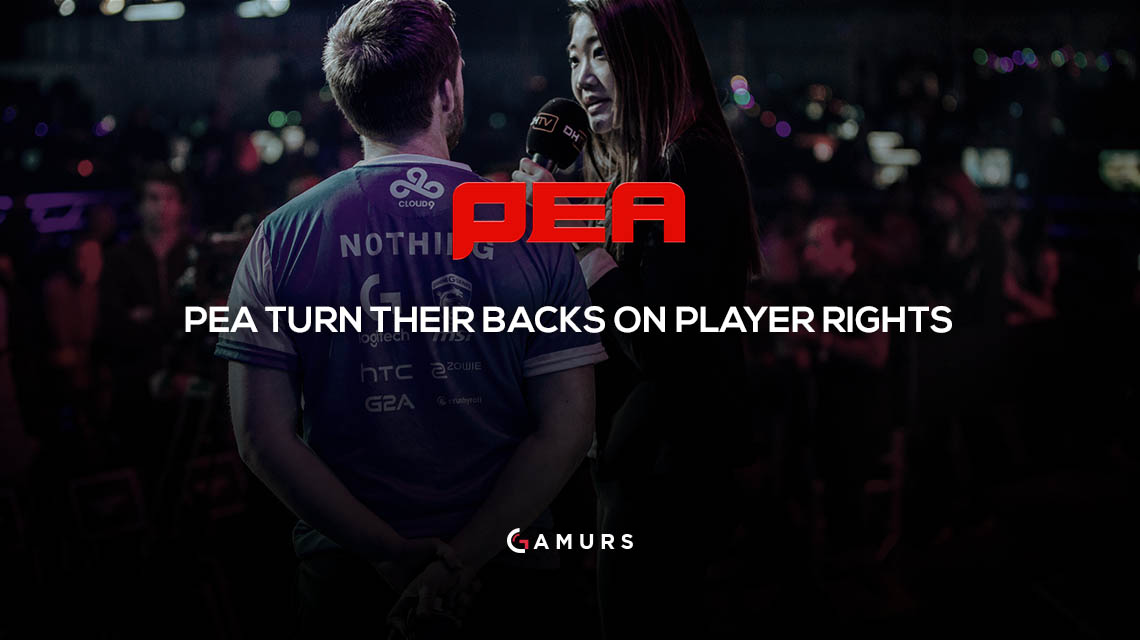 In an open letter, five North American teams declared their right to choose what leagues they play in after rumors of the Professional Esports Association (PEA) barring its members from participating in ESL Pro League surfaced.

Representing the players in this infantile union is none other than Scott “SirScoots” Smith. Smith has been a long-time member of the Counter-Strike community and has spoken out in the past about problems in the esports scene. The most notable of his calls for action was in the regulation of skin gambling. Since he possesses a deep knowledge of the scene and is in a position where he cannot be swayed by corrupting influences, Smith is a strong choice to represent the players in this dilemma.

In the letter, the players indicated that they did not receive the PEA as enthusiastically as the press releases may have painted them to. They also revealed that the PEA was not the transparent, player-focused association that it was promised to be. When trying to send a document to their council, Smith, the players were given a myriad of excuses. One owner said that Smith should have already had the document. One said that he needed the permission of Jason Katz, the PEA’s commissioner, to share the document with the players. Katz himself said he “wasn’t aware of the existence” of the document. Between Dec. 7 and 9, the document was requested no less than five times, and never given to the players or their representative.

The players decided to remain in EPL against the orders of the PEA. SirScoots sent the players’ decision to remain, but before the players and the PEA could talk, it was discovered that the PEA had already ended negotiations with the EPL. Apparently, the EPL offered to share revenue with the PEA, but the PEA turned down the offer in favor of barring its teams from the league.

The player-centric alternative to WESA promised that the players would have proper voting power. As the association developed, it turned out that the PEA and team owners would have the majority over the players. Commissioner Jason Katz, holding one of the two PEA votes, promised that he would be a impartial voter. Since the PEA is an association of teams forming the league, like the NBA, where the owners of the teams own the league, the players are unable to count on his impartiality. In the past, Katz has been a part of organizations that haven’t been player centric at all. He was Vice President of Operations and Vice President of Global Marketing for the Championship Gaming Series. The CGS, as it was more commonly referred to, turned out to be the players’ worst nightmare. They had no control, not even in winning the league. The CGS hosted multiple games. The Counter-Strike team of compLexity did very well in the regular season, but the other sections of the team did not do so well. Due to franchsing and the point system implemented in the league, every team in an organization was reliant on its partner teams to do well and qualify for the World Championship. While compLexity’s Counter-Strike team dominated the league, its other teams performed so poorly that the organization could not qualify for the World Championship. Completely seperate esports determined the fate of this Counter-Strike team. A somewhat broken system, to say the least. Can Jason Katz, who was involved in this league, really claim to be in touch with the players and understanding of their needs?

Back to the present. In the letter, the players revealed that they confronted the team owners when they thought it was their right to compete in whatever league they chose. Team owners, not players, control what tournaments they compete in. For example, Virtus.Pro players did not want to go through the process of qualifying for ECS, so they chose to skip out on that league. The owners of the team replied that the players were contractually obligated to compete in the leagues they are told to compete in. Not allowing players to have a say in which leagues they compete in is restrictive, and in a world where countless leagues oversaturate the market, forcing players into tournaments they do not wish to play in only adds on to the suffocation.

This new association of players represented by Smith is a much needed innovation in esports, a field where petty squables have held back players from getting the things that they deserve. This organization appears to seek not only dialogue with the PEA to create standards, but also to form a lasting force in the realm of player rights. Players from five teams have signed this open letter, and they hope that the players on NRG and compLexity will join their cause after reading its content.

Current signers include all of the players on:

Is it about time for a players union, or are they just overreacting? Let us know in the comments section or on Twitter @GAMURScom.