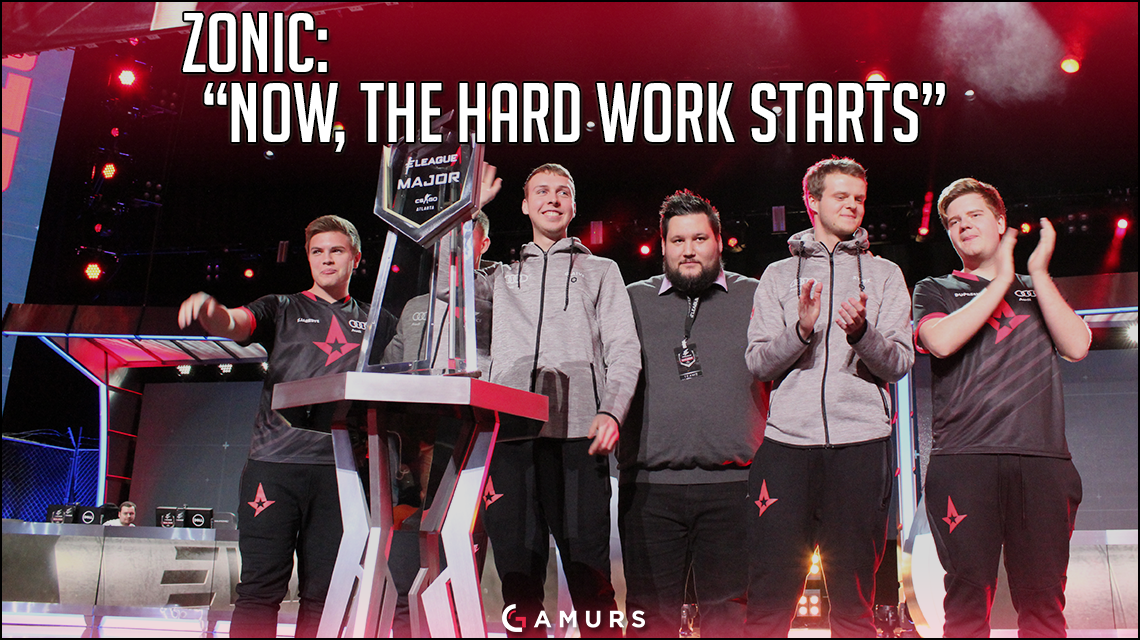 We talked to Astralis coach Danny “zonic” Sørensen after his team won the major.

First of all, congratulations on winning the Major! After proving yesterday you were still confident on Nuke, what were your expectations for the first map knowing Virtus.pro also likes to play Nuke? Did you expect to win on it, or were you pulling that you would be able to win on Overpass and Train?

zonic: “Me and gla1ve watched some demos yesterday of VP and they were looking really good, but they were also a team we could actually study and counter. Some of that didn’t work out as a CT, and we lost the second round even though we knew exactly what they were going to do. It was a tough match, but it went ok even though we lost.”

One thing gla1ve mentioned during the press conference was how sometimes you were getting baited into fakes by VP, happening several times on Overpass. How do you, when you’re watching that as a coach from the sidelines, calm the team nerves down and help your team react to these fakes better?

zonic: “It is something that we knew they were gonna do. First of all, the thing is that me and gla1ve have said that we want to play all seven maps, and even though we didn’t play cobble this event, we still played the other six. So in terms of the strategy and stuff, it’s only me and gla1ve who really anti-strat because the other players can’t really cope with that sort of information; they just want to focus on their own game. So we tried to anti-strat them and worked on our game plan, but some of the players forgot some of that. So what I did was to call timeouts and remind the players what we had studied. And to be honest, we had a pretty bad day today. Not taking anything away from VP, but I guess that’s how it is in a major final.”

For sure. Another part of that Overpass game were the back and forth round wins and clutches. Xyp9x and Kjaerbye especially had a lot of really big clutches. How did that affect team morale?

zonic: “It did everything for us. To have a bad game and then have some players step up is huge. It wasn’t dupreeh or dev1ce who usually step up that carried us this time. Especially Xyp9x was a clutchmeister this time like in the 1v3. I am so proud that some of the players who are usually a little bit quiet stepped up for us today when we needed it.”

Obviously, your T-side Train is based around the map-control, default style setup. By the end of the map, you had dramatically shifted into A focussed aggression. What was the trigger for that?

zonic: “We have actually done that in the past couple of matches, we just did it quite late this time. We knew that they didn’t have an AWP. Gla1ve also saw that Snax was going offensive pop at the beginning of the round in earlier rounds, so he thought we could catch him off guard. When he called it, nobody really doubted it because we had done it before and everyone believed we could catch them off guard.”

ECS Season 2. ELEAGUE Major. Is this the era of Astralis?
zonic: “Yes. As dupreeh said we have been working with our sports psychologist for four months now, and she actually believed we could be here today. But she also told us that now, the hard work starts. We’re the team to beat and everyone will want to counter us. We’re going to have to stay humble and not get cocky and work hard still to stay in the first spot.”

What did you think of that grand final? Let us know your thoughts in the comments below or tweet us @GAMURScom.