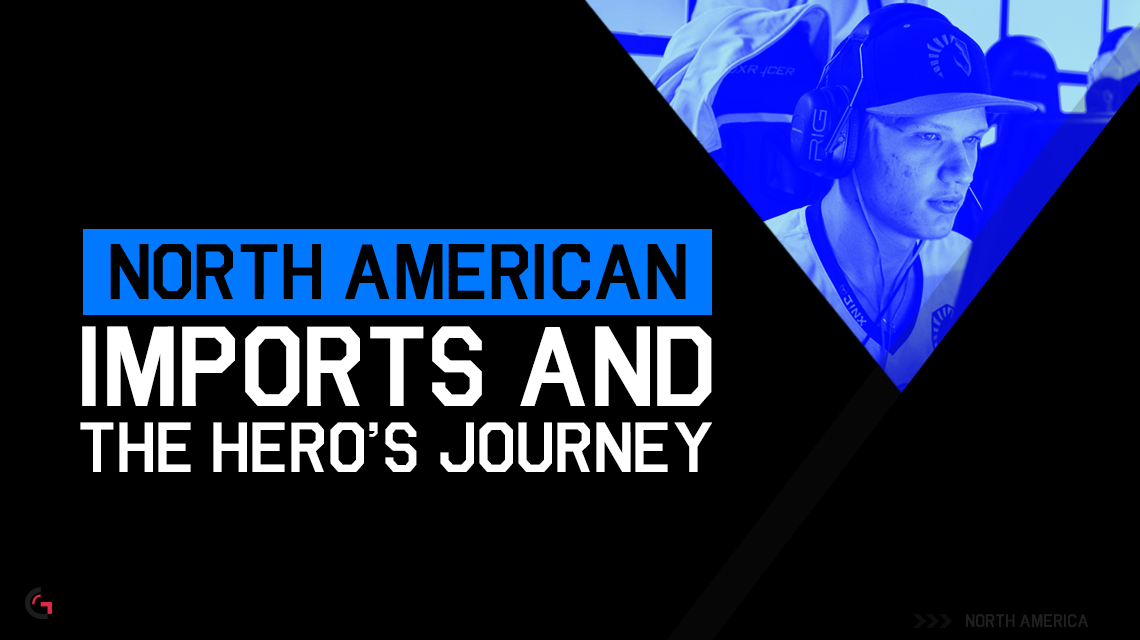 —Oscar Wilde, “The Decay of Lying”

Joseph Campbell’s seminal work “The Hero with a Thousand Faces” describes a paradigm apparent in literature which Campbell calls the “monomyth” or “the hero’s journey.” The basic progression revolves around an unprepared or unwilling adolescent tasked with a journey or mission into the unknown. The end goal is usually impossible given the youth’s initial capabilities, but eventually, the guidance of his companions and the sum of his experiences gives way to greatness before he ultimately accomplishes his task and returns home a hero.

While Team Liquid’s run at the most recent major, ESL Cologne 2016, did not end in absolute victory, their showing highlighted the almost mythic opportunities available to the best unproven players in Counter-Strike: Global Offensive. Due to more spread out talent but still high reserves of capital, North American teams have shown a continued willingness to make stars out of imported players, despite the difficulty of such a transition. The journey of these imported players bears an undeniable resemblance to Campbell’s Monomyth.

This is my substitute for pistol and ball. With a philosophical flourish Cato throws himself upon his sword; I quietly take to the ship.

In many narratives, the transition from adolescent to hero is often initiated by a protagonist’s move from the ordinary to the other. The quest dictates that the soon-to-be hero has to leave behind the relative comfort, safety, and familiarity of his past in order to take part in his dangerous, difficult, but ultimately advantageous journey. In esports, that move may not be as dramatic as the transition from Tatooine to the Death Star or the Shire to Mordor, as escaping the ordinary only takes an Ethernet cord, router, and an account on Steam. However, the more dramatic North American odyssey journey still mirrors the opening segment of Campbell’s through line.

Currently, the most talented players in the world who have either never fully developed as players or are not able to play on top national teams for whatever reason now have an extra opportunity to play in parts unknown. Oleksandr “S1mple” Kostyliev has obviously been the foremost example to this sort of success story. Despite having a talent level on par with or even surpassing some of the most renowned players in the world, his contentious personality and ESL ban made him an unwanted commodity amongst the better Commonwealth Of Independent States (CIS) teams. Instead of slumming it out in the doldrums second-tier CIS CS, S1mple made the move halfway around the world to join a Team Liquid team who had shown more potential than potency in earlier international events.

The sacrifices involved in this type of displacement should not be underestimated. Because team houses are often not a part of the Counter-Strike ecosystem, moving to America to compete can isolate players and leave nothing in their lives other than the game. Even if a team house is available, the predicament of living in a high-pressure environment in uncomfortably close quarters can be still be debilitating, especially when living in a different culture. Also, consider that the difficulty of the journey does not always give way to greatness. Recall that former Fnatic player and coach Jonatan “Devilwalk” Lundberg and NIP’s current fifth, Jacob “pyth” Mourujärvi, played on a dismal Mythic/Winterfox team from July to October in 2015 where they found little to no success online or offline.

However, the innate difficulty of operating within a foreign team, whether successful or not, may actually help the most talented players make the most of their game. Without the comfort of the “normal world” or your former home to fall back on, it could be more difficult to neglect your own shortcomings or accept poor results.

All the disadvantages in the world stem out of a person’s lack of ability.

Historically in North American Counter-Strike, a lack of competent leaders has been a frequently cited shortcoming of the scene. In the previous paradigm of imports stretching back into 1.6, it was thought that what the North American scene needed was more tactically proficient leaders who could superimpose European-style discipline and structure. Famously, Tomi “lurppis” Kovanen was brought into a North American Evil Geniuses team in the latter days of 1.6 to do just that. A similar line of thinking probably led to the pickup of Devilwalk last year, but in 2016, the mentality seems to have shifted significantly. With several veteran ex-Cloud9 players in Hiko, Kory “Semphis” Friesen, and Sean “sgares” Gares now leading various squads alongside imports like Fatih “gob b” Dayik, Luis “peacemaker” Tadeu, and a returning Devilwalk, talent rather than in-game intellect has become the needed commodity in North America, and with these more capable leaders in place, talents such as S1mple and Oscar “mixwell” Cañellas have been able to shine more. Both have had much better individual performances and placings than initially expected and have led to the growth of both teams up until this point.

Campbell himself also lists a “road of trials” as a specific step in the hero’s journey following his preliminary departure into the unknown. These trials would be smaller stop-gap arcs to build tension and show the would-be hero’s progression. More often than not, he would have to accomplish some feat, such as defeating a dragon, pass through fortified barrier, or defeat a rival thereby showing his personal progression. In this context, this “road of trials” stage could be the waning and personal clashes often associated with fledgling teams in the wake of forming a new five.

While there have been certain cases where the formation of a roster with innate chemistry immediately produced amazing results, such as Fnatic’s post-Pronax showings with Dennis “dennis” Edman, historically, more often than not, a new roster of dissimilar nationalities or otherwise have usually struggled at first. Recall in Liquid’s first offline event with S1mple, the MLG Columbus Main Qualifier, Liquid scrapped through the qualification process with S1mple having a rather poor performance himself in their final match versus HellRaisers. Additionally,  when S1mple returned to play two tournaments with Liquid more recently, they had only a decent showing at their first tournament, ECS, as they were able to beat a sweltering G2 twice in four games, but S1mple once again had a very underwhelming tournament overall.

After defeating HellRaisers at the Main Qualifier for MLG Columbus, S1mple had a very emotional, tearful interview, where he acknowledged that he was more like a support player in that series and had to rely on teammates due to his lackluster play. Of course, S1mple put up an astonishing showing at MLG Columbus due to his typically individualistic play, but perhaps it was this humbling experience at the qualifier along with some of his other interpersonal missteps that encouraged him to play more within the Team Liquid system at the next major where he perhaps found his highest ever level of play.

Any road followed precisely to its end leads precisely nowhere.

The hero’s journey almost never ends by only conquering the underworld or the other realm. Once the hero has accomplished his original directive, he is often forced to reckon with the “normal” world he once knew. Campbell writes “The hero adventures out of the land we know into darkness; there he accomplishes his adventure, or again is simply lost to us, imprisoned, or in danger; and his return is described as a coming back out of that yonder zone…the two kingdoms are actually one. The realm of the gods is a forgotten dimension of the world we know.”

If a player goes through the archetypal journey of a hero, where he is able to leave behind the normal to develop his innate potential through his experiences abroad, the journey could return him home. An imported player does develop himself and overcome the apparent obstacles as a hero would, perhaps even giving a good showing himself at a Major, a final battle of sorts, then the team that was out of his reach initially could become available to him and warrant his return home.

While Pyth’s growth, or lack thereof, in North America was obscured by Winterfox’s lack of LAN appearances and the relative dysfunction of the organization, perhaps there could have been some transformative aspect to his tenure in North America which helped enable his more recent pickup by NiP and his respectable performances thus far in that lineup. S1mple, on the other hand, more closely matches up with the ideal. After being removed by both HellRaisers and Flipsid3 earlier in his career, no roster was willing to turn him in, leading to his move over to America at the start of the year. Now after two historic Major performances, S1mple’s elevated status has earned him offers from several top teams following his final return home. Mixwell is still in the process of making a name for himself on a less-talented team and former MongolZ player Enkhtaivan “Machinegun” Lkhagva has just signed with Splyce, so the final impact of their relocations is still indeterminate.

The capacity for players to go through this arc, to move from a talented young player to one of the stars or heroes of the game, still looks possible given the right team, resources, and personal ability. For better or worse, it is unrealistic to expect many players, even the most talented ones, to be willing to radically reshape their lives just for a shot to develop themselves or show off their talents abroad, but for those exceptional few who want to prove their own ability by going through this arduous process, the door seems open for now.