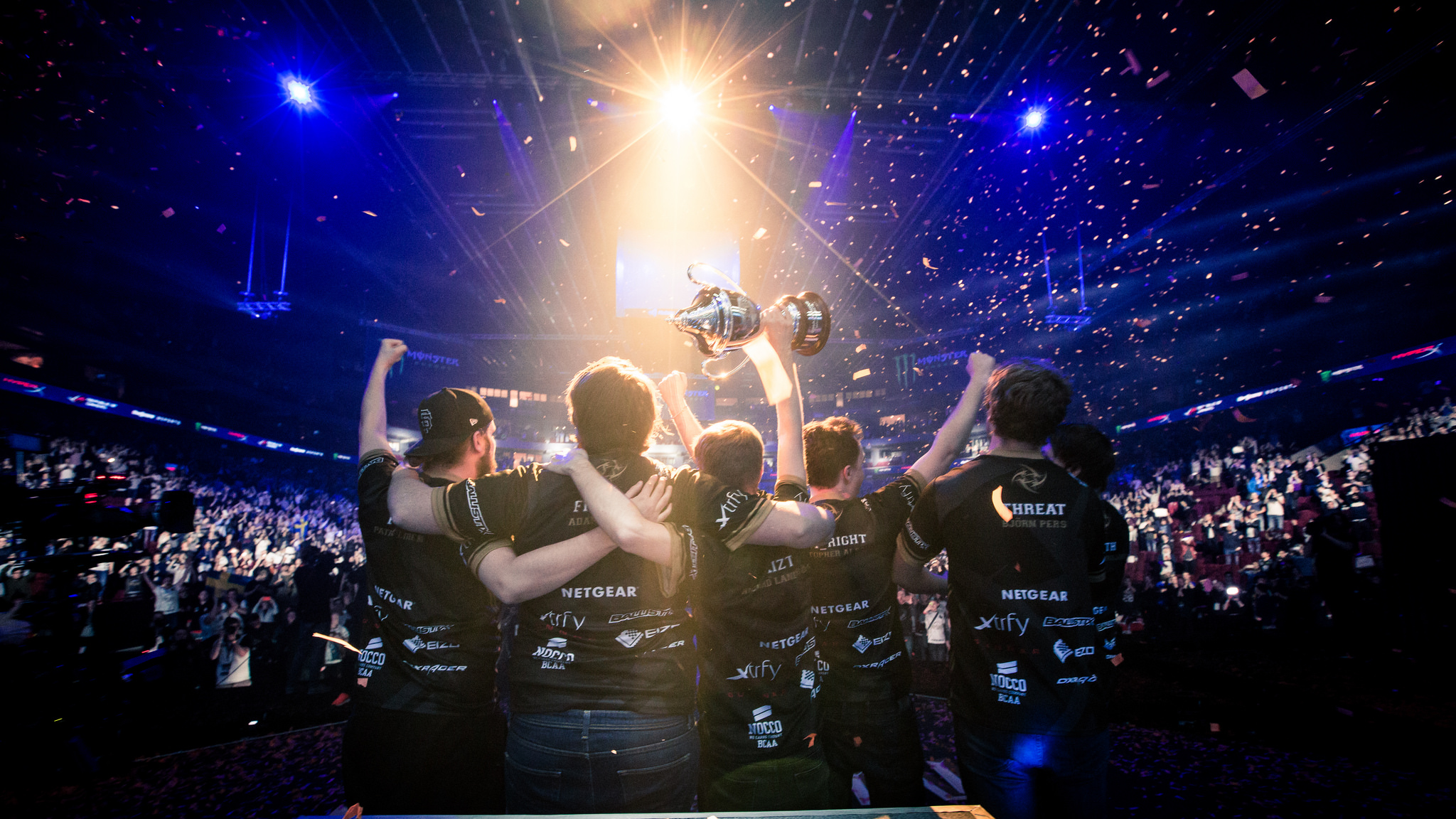 To take the role of king in CS:GO, you must acknowledge that the position is ephemeral. Dynasties rise but inevitably they must fall. It’s the only guarantee—no matter the year, nationality, or team—that the CS:GO scene can offer for the world’s elite sides.

It seems, however, that the why and when of a team failing are the only two focuses. Even in spite of its certain nature, not much emphasis is put onto how a team fails. How, in spite of previous success, do they decide to end the era?

To explode, or to fizzle out, how does a dynasty end, and why does it matter?

On June 12, 2017, after years of speculation, success in the face of naysayers, and failure in front of fans, Adam Friberg left Ninjas in Pyjamas. This marked the end of the legendary NiP four-man core that played in both the birth and growth of the game they once ruled. They were a cornerstone unit and seemingly irremovable from the space.

Their steadfastness in the face of failure did many things to the way we look at their narrative historically. One of the more interesting aspects though, is how the core is now simultaneously viewed through the lenses of failure, mediocrity, and success. On one hand, you can’t ignore the core’s unparalleled success throughout multiple meta and map pool changes. While on the other, you also have to acknowledge their failed attempts at integrating a coach and not adapting out of an outdated style of playing.

The sheer bank of historical data makes a universally agreed upon idea of how we look at their legacy impossible. As such, it might be more constructive to take a specific angle in approaching the core and see how this smaller frame applies to the broader legacy.

In this sense, how did the timing, context, and manner in which NiP ended the four-man core impact their overall legacy? How does the removal of friberg in June of 2017 impact the multiple lenses we can view this core through?

Very few teams in history can match this same “refusal to change” approach NiP took to their roster. So to unpack, let’s look at two sides who took the opposite approach—but with differing degrees of success.

Sith lords gone in a blink

The 2014-15 Fnatic roster might very well be the most impressive team in CS:GO history. While a slew of hour-long arguments can be made otherwise, the sheer body of work Fnatic achieved across highly competitive periods of play is undeniable. For 15 months straight, they dominated. Yet it took only a two month “dip” in form to break them apart. A dynasty that once forcefully helped shift the CS:GO meta was gone in a blink.

The why of this situation is fairly well documented, with members citing internal issues that truly first appeared in the team following the consequences of the Overpass boost controversy at DreamHack Winter 2014. What’s more, Fnatic’s clear struggle to adapt against the disgustingly in-form, new style, EnVyUs led to a series of closely fought losses. Key losses compounded an already tumultuous team morale, leading to a volatile environment for change.

The sudden disappearance of Markus “pronax” Wallsten post-DreamHack: Cluj-Napoca however, did nothing to hurt their legacy. If anything, this quick move might have saved it.

Even though they were losing to the likes of Virtus Pro and EnVyUs with regularity, this period was so small relative to the scope of their dominance, it’s hard to dwell on. What is a three or four tournament slump on a résumé that includes two major wins, countless top four or top two finishes, and tournament victories?

What’s more, their legacy is further helped by the success they experienced with Dennis Edman coming in to replace pronax. Their five tournament win streak piled onto the already overflowing trophy cabinet and pedigree of the existing four-man core—albeit, in strange and confusing fashion. In this sense, Fnatic’s sudden change worked out perfectly. They saw a downward dip, made the right roster change quickly, and turned around to collect trophy after trophy. In terms of looking back in history, it doesn’t get much better.

For teams that have quickly come to an end, Fnatic showed a best-case scenario in which the sudden roster move worked wonders. Not all teams that go down this road are draped with success though—especially when the promise is high and deliverance low.

The four-man Na`Vi core that comprised of Danylo “Zeus” Teslenko, Denis “seized” Kostin, Ioann “Edward” Sukhariev and Ladislav “GuardiaN” Kovács, existed for a period of nearly three years. In this time span, we saw Sergey “starix” Ischukmove move to a coaching role and Egor “flamie” Vasilyevaim’s talent filling his place. It took Na`Vi longer than most to find their footing, with the Valve coaching rule and GuardiaN’s hand injury definitely not helping in this process. Despite these factors, and the long time it took flamie to develop under starix, Na`Vi became a mainstay in elite play.

With a résumé that flaunted consistency and ability to perform in high pressure scenarios, Na`Vi were briefly the best team in the world in early 2016. Despite their run of form throughout 2016, Na`Vi experienced a disappointing top eight finish to a super-charged Team Liquid roster at ESL One Cologne 2016. This poor finish seemed to impact the team far more than their overall success in 2016 should have allowed. What’s more, this blow was dealt in large part by Oleksandr “s1mple” Kostyliev’s godly performance within the Liquid roster.

The apparent availability and on-paper upgrade s1mple brought, combined with the poor performance was seemingly enough for Na`Vi to drop Zeus and pick-up the Ukrainian prodigy. This addition of s1mple to the already talent-loaded roster pushed Na`Vi to new heights as they won ESL One New York in impressive fashion. This success was short-lived though as, since then, they have been battling an inescapable regression back to mediocrity.

With the success Gambit Gaming has had under Zeus’ tutelage, there is no doubt that he and his system were the backbone that supported Na`Vi. What’s more, historically, his system and the flourishing of stars under it gave Na`Vi a famed consistency and willingness to dominate lesser competition. These two traits would have been crucial in the uncertainty era of late-2016 that followed Zeus’ departure. In a time where new teams, like s1mple’s Na`Vi, oscillated constantly, a leadership style like Zeus’, on a top team, would not have gone astray.

With this in mind, the s1mple/zeus roster change put a disappointing “what could’ve been” on the end of Na`Vi’s three-year era of play. Although this conclusion entirely relies on historical hindsight, one can’t help but ignore the potential of a Zeus-led Na`Vi in late-2016 versus what the s1mple imbued roster actually gave us.

Even if this s1mple roster could magically find itself tomorrow and become a top team, this wouldn’t make up for the massive gap in time where a CIS team should have been making a far larger impact. The argument levied against them could be one to fizzle rather than explode.

This brings us to the question of how to look at the end of the NiP era with the departure of friberg?

Unlike Na`Vi and Fnatic, NiP stood true to their philosophy of retaining the core for as long as possible, and paid the price for it. But not necessarily in a bad way. Even well after the used-by date of their legendary form, NiP would go on to win three big LANs in 2016 (admittedly, one with Maikelele). What’s more, their best-of-three upset over TSM in Cluj-Napoca might be one of the more ridiculous, even if overlooked, moments in their tenure as a team. There were disparaging lows to watch throughout their later years—but also equally inspiring highs.

Few cores, outside of Virtus Pro and the unwavering Danish trio, can boast such magnificent, albeit brief, returns to form in the face of so many apparent issues. Whereas the continued success of sides like Zeus’ Na`Vi and Pronax’s Fnatic will ever remain in the unwinnable “what if?” arguments, the same can’t be said for NiP.

Even if NiP now go on to become the best team in the world with draken, or if they continue to be mediocre, this will by no means put a negative spin on the end of their era like we saw with Na`Vi.

They are a team who can feel safe in the certainty of the final stage of their legacy. There are no lurking, untapped, insatiable storylines for fans to consume around the four-man core. Key opportunities were missed for player swaps and we saw how the side fared after not taking them. Every reasonable configuration of roles, balance of styles, coaching, and practice philosophy has been tried and tested within this core. CS:GO’s metas and map pools have waxed and waned around NiP’s equally undulating results. They fizzled out, but at least with a large silver lining.

While you can argue that the change was overdue, at least they guaranteed that the inevitable end of their roster will not be remembered for a lack of trying to work as a four-man core. Whether that is what was best for fans or for the team in a more general, macro sense is another question altogether—that’s the nature of when they should’ve made this change. But at least they did their part to preserve a legacy that lies in the memories of so many fans.