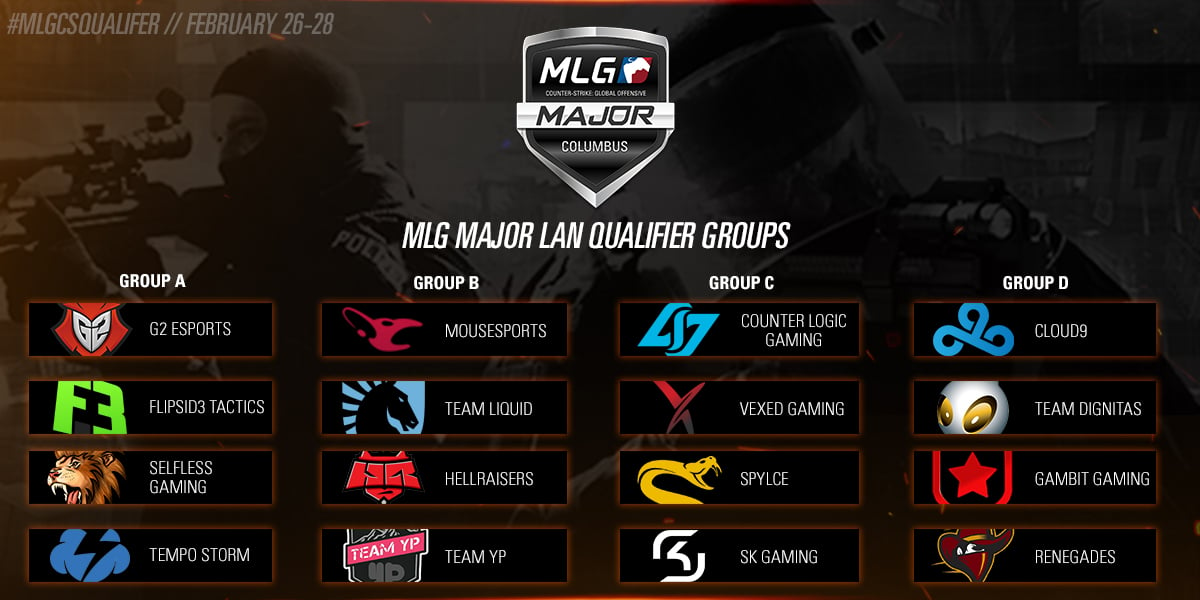 The first Counter Strike major is arriving quick and fast. With that, we need to decided which eight teams will accompany the eight “Legends” from Dreamhack Cluj-Napoca in MLG Columbus. In this preview, I will be giving a run down on the teams in group C and also providing predictions on what I think the results will be.

As one of NA’s most consistent and solid teams over the past year, CLG will be looking to qualify for their 4th major in a row after competing in all three last year. They’ll be going into this qualifier with a solid start to 2016 by putting some good results on offline as well as online. At there last LAN they attended, Game Show Global Esports, they showed that they could hang with some of the better teams in Europe by taking a map off of Envy and beating Flipsid3 and G2 2-0 and 2-1 respectively. Online however, they have started very slow in the EEPL with a 1-5 record by being beat twice by both C9 and Renegades. But recently they showed that they were still as good as C9 by beating them 2-0 in the 3rd place decider game in the Dreamhack Masters Malmo qualifier to qualify for that tournament. I would look out for JDM64 as he is the star player on this team and will have a big impact on how this team will perform.

As the number two team in Poland behind Virtus Pro, Vexed, will be vying for there 3rd straight major appearance since qualifying to ESL One Cologne last August. Vexed competed at the ESL Barcelona Invitational last week but were not there for too long as they went 1-4 with only being able to pick up a win against x6tence. It wasn’t much better the tournament the weekend before as they struggled in the Acer Predator Masters 2 as they again went 1-4 losing to Hellraisers and fellow polish side Csgo Lounge. But I do feel that this team will be able to reverse there fortunes and be successful enough to do well in this qualifier. This team was able to make a name for themselves as they were E-bettle by qualifying for the Cologne major and I feel they’ll be able to perform in Columbus as they did there.

As the newly announced team to replace Mongolz, this qualifier will be Splyces first major LAN as well as there first chance to qualify for a major as a team. Splyce played their first offline tournament as a team when they faced up against North Americas best at the MLG North America Minor Championships. They performed well and were able to get a berth into the final against Selfless by beating Optic Gaming in a bo3 upset 2-1. But in the end they showed up be no match to Selfless as they were taken down 2-0, finishing in 2nd place. They have been struggling online as since that bo3 against Selfless they have a shocking record of 1-9. Splyce definitely comes into this group as the underdog and will need to have some huge performances by there best players for them to stand a chance. Lookout for Professor Chaos as he’ll need to go big if this team wants a chance to qualify for the major.

To round out the group, Denmark’s 3rd best team SK Gaming will be trying to secure a Major spot for the first time. SK was able to make it to this qualifier by easily beating Allu’s ENCE 2-0 with scores 16-2 on train and 16-6 on mirage.  Their last offline performance was at the Dreamhack Zowie Open in January where they did not find any success as they lost to Navi in a bo1 and Luminosity in a bo3 2-1. But in online play there were able to get some revenge on Navi by beating them in two separate bo1’s in the EEPL 16-7 on cobble and 16-12 on train. Along with there newest addition to team Pimp, who was formerly apart of Dignitas, I feel the SK has the potential to do some damage in this group. If they play their cards right, they may be looking at a spot in MLG Columbus.