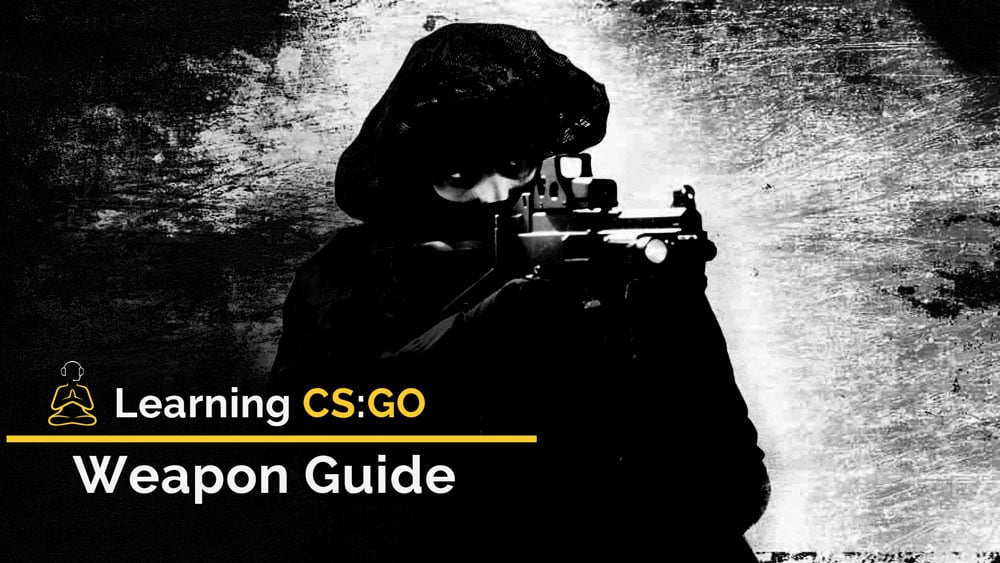 In the first article of the Learning CS:GO series, we talked about the different game modes and gave an introduction to the game. Today, we talk about the most important weapons with an overview of everything you can buy in the game.

Handling your weapon in Counter-Strike is different than other FPS games you might be used to. With most weapons, you can not aim down the sights, so you must focus on moving your crosshairs to the right place and on having good spray control.

The most important thing you need to know about the pistols is that there are three starting weapons. On terrorists side, the Glock 18 is capable of doing 130 damage when you hit the head of an unarmored opponent. With armour, headshots do 61 damage. Unarmored body shots do between 24 and 40 damage. Damage output depends on distance, armor, and the hitbox.

On counter-terrorist side, you choose between starting with a P2000 or UPS-S in your inventory. They feel a bit different from each other but are basically equal in effectiveness. The P2000 has more ammo and slightly more range than the UPS-S, but lacks when it comes to recoil control and does not have a silencer.

In this video, TheWarOwl gives an overview to all pistols and how to use them correctly.

Your weapon of choice on T-side should always be the AK-47. It is most efficient if you know how to use it properly. With its potential (taking down armored enemies with one headshot), comes a need to train this weapon and learn to control the spray and aim for the head.

The counterparts on CT-side, M4A4 and M4A1-S, do not kill armored enemies with one bullet to the head but are easier to control. If you are not sure which of these you should use,  think about this: Do you spray a lot? Do you need more ammo or do you prefer silenced shots?

The M4A1-S has a smaller spray pattern, but the M4A4 has a bigger magazine. This will help you when it comes to pre-firing, spraying, and wall banging. That is why an aggressive, pushing playstyle fits better with the M4A4, which is also $100 cheaper. However, in a playstyle that is more about being sneaky with less spraying, the M4A1-S would be the better choice. In the end, it is up to you which weapon you use and what fits you.

Let’s talk about snipers. When used correctly, the SSG can one-shot kill even armored enemies (headshots), but as with every weapon, effectively using a particular sniper rifle depends on the situation. Your movements with the SSG are fluent and good for a one tap shot attempt (especially jump shots). However, the AWP is better. You one-shot everybody you hit above the legs, but the power has its price. The kill award (money you get when killing an enemy) with the AWP is just $100 in competitive CS:GO instead of $300 or more.

Shotguns are very effective in combat when you are close to your opponent. Their efficient range is very low, so when you play a shotgun you need to use their burst potential at close range correctly. Camp edges where an enemy cannot shoot you from a distance, or rush them and prefire the close corners.

SMGs are often used as spray weapons. With a large magazine and enough additional ammo to back you up, the P90 and company need to be controlled correctly. “Spray and Pray” is not effective with these weapons. Instead, aim and shoot downward to let the spray hit the enemies the right way. Of course, you can also use them for aimed shots. In competitive, SMGs are often used in the second round where you spend some money for a better weapon, but they can be used in different situations as well.

Use your grenades to stop enemies from rushing or make them move somewhere else. For example, pushing a sniper out of his nest by throwing a molotow under him is effective. We will talk more about how to use them in a later post.

A good way to get to know each weapon is by using them in different game modes. If you turn on ‘random weapons’ in Deathmatch, you will be able to get a good feel for all of them. Other gamemodes bring you closer to weapons in their own way. Also, playing the introduction can help a lot.

You can find a  more detailed weapon table here. Another site I used for this overview is the  Counter-Strike Wiki. A very good explanation was given by  Hatton Games. He clarifies in short videos the pros and cons of different weapons and how to use them.  Some videos might be a bit outdated (price and stats) but are correct when it comes to gameplay parts.

Thanks for reading! The next part in this series will cover gameplay basics.