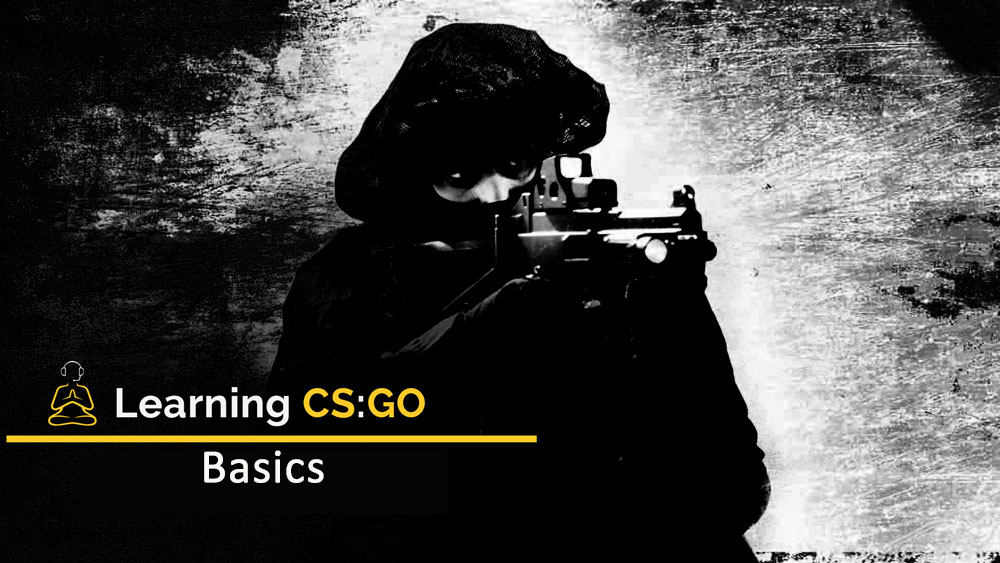 In the first two sections of the Learning CS:GO series, we introduced the game and its weapons. Today we will talk about gameplay basics, which you need to know and train to become better. As we did in the Weapon Guide, we will underpin everything with useful videos.

At the most basic level there are two components a player needs to master to become successful: mentality and physical skill. Reaction time, aiming, motion control, and f ine motor skills are all physical skills. The mental side is about tactics, morale, communication, and concepts in that same vein. The mindset you need to have will be explained in article #8, Mindset. The only thing we need to mention now is: keep calm, don’t flame, and be handsome.

The first thing on the agenda is a video from ThioJoeGaming. In it, he explains how to communicate effectively with your teammates as well as why communication is so important. In my opinion, he values communication a bit too much when it comes to beginners. Despite this difference in opinion, communication becomes more important the more you play CS:GO, so it is still important to practice it as you get better. Calling out enemy locations is one thing that helps your team a lot and is something that beginners should focus on. We will go more in depth regarding callouts in article #5, in which we will focus on Maps.

The title of the video might be a bit abrasive, but don’t be taken aback by it. When you are new to the game, the topics he talks about are very important when it comes to becoming better. Most of the video is about how to effectively communicate with your team. Topics like predicting where people might go based on callouts and how you should callout are discussed.

The next topic is economy. In competitive games you will receive money and will need to spend it to buy better weapons. The money you spend doesn’t just affect you. If you buy but no one else can, you will probably lose the round and throw away a lot of money. If your teammate cannot afford any weapons, it is a good move to drop a weapon for this player.

The kill rewards for each weapon are different (e.g. you receive $100 for an AWP kill, but $900 with a shotgun). In the end, it is a balancing act and you should always look to buy the weapon of your choice, but if you are low on money it might be better to buy an SMG instead of a rifle.

In the above video, WarOwl explains the basics of how to go about spending your money. If you want to learn more on this topic, here are some useful videos on Early Rounds Buying and the  Mid Game.

Aiming is about movement and control. If you can control your weapon, you are almost good to go. Knowing and controlling spray patterns and deciding correctly when to use which form of shooting (one tap, side step shooting, or spraying) will help you a lot.

One tapping is about eliminating enemies with a headshot kill or bursting them in controlled fire. Side stepping is a way you can dodge shots and fire accurately. You can, for example, go left, stop by pressing the D key and releasing the A key, and then shoot. You stop faster like this (instead of just releasing the A key). Repeat it in the opposite direction and shoot. The CS:GO E-Show made a good introduction on these techniques.

The first topic he discusses is crosshair placement. Where do you need to aim? When is it right to check corners, when don’t you need it and how should you do it? Pre aim a spot and you will have more time to shoot the enemy than if you needed to move your crosshair across half of the monitor.

Tip #2 number two is about the different fire modes: one-tap, burst, and controlled spray. He shows the AK’s spray pattern. By moving the mouse down you can control it.

In tip #3, the video explains how you should peak corners. There are different ways to do so, one of the most effective of which is peaking to make the enemy shoot and thereafter shoot him down (preferably assisted by a flashbang).

The fourth and last tip is extremely important as it addresses a common habit among players. I can’t even recall the number of times I find myself making this mistake. You might get around two or three more kills every game if you work on it. Reloading! Don’t reload if there might be another enemy coming out. Cover when you reload, don’t rush. Even as little as 5 bullets is more than enough to kill someone. If you have the time and cover, you can reload, but more often than not it is better to instead hold your location.

Another good video about basic shooting is from DooM49. It is mostly about working on your aim and the different methods you can use to practice against harmless bots. He recommends joining a deathmatch after the training to see how you mechanics got better.

Thanks for reading! We will talk about some other training methods in the next article.