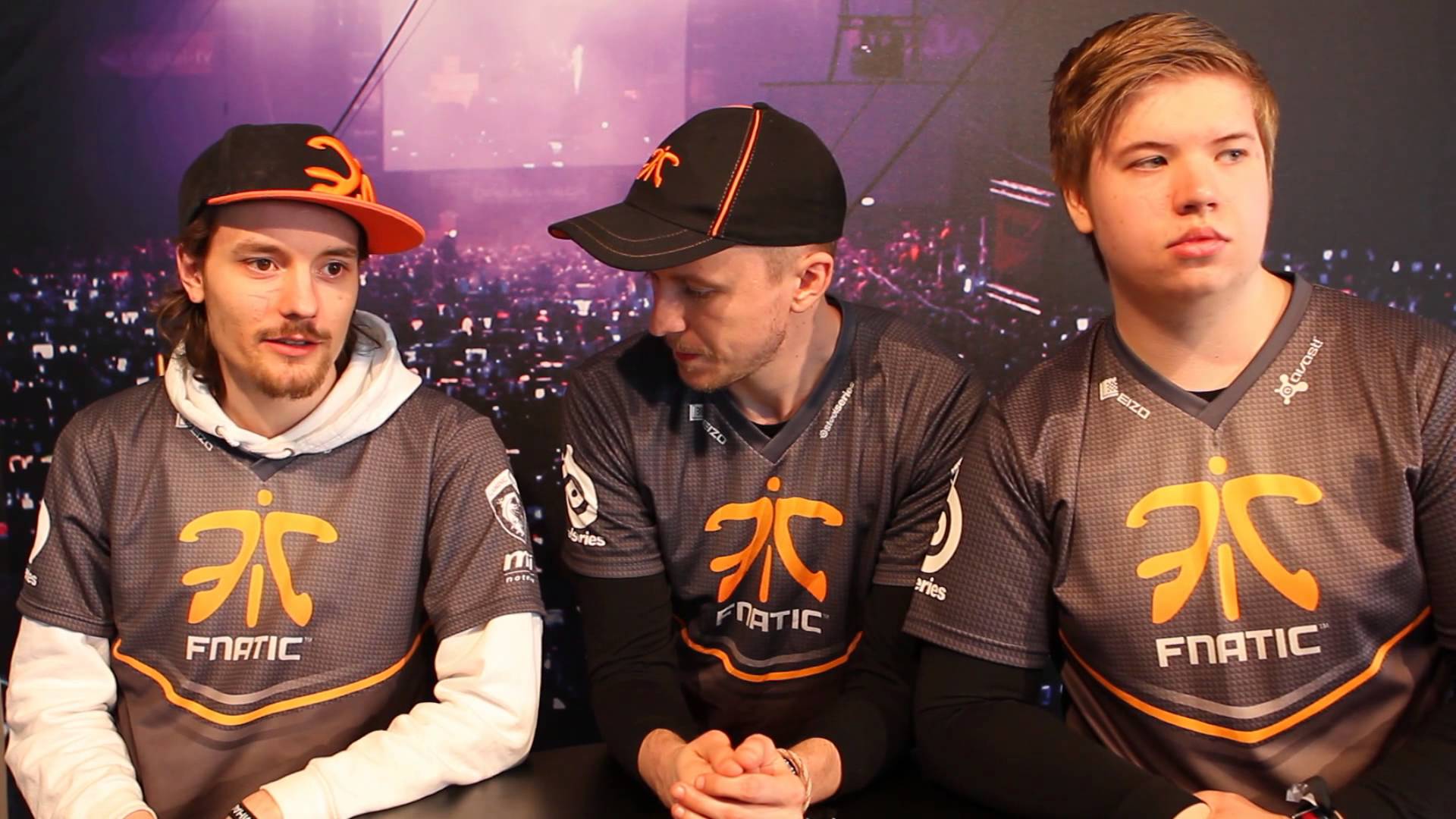 Following the Swedish roster shuffle, I caught up with three-time major champion Jesper “JW” Wecksell. After three years on Fnatic, the explosive AWPer has relocated to GODSENT together with three of his 2015 Fnatic teammates, and I set out to find what happened.

First of all, since when did it seem like Fnatic might make a change? Is this something that had been brewing within the team since olofm’s injury? Did it possibly play a part?

JW: I do think it all started brewing at the same time as olofm’s injury, but it wasn’t really because of it. Leading up to the Columbus major, we just wasted a bunch of days practicing, maybe even weeks. We didn’t train anything, and the last couple of days before it we didn’t even practice (that was because of olofm’s injury though). I do believe we wouldn’t have practiced anyways though, because every day felt like it was just a waste of time. So I think it all started there.

What was the actual catalyst that led to this move being made? I assume you also considered sticking to the roster through 2016 before making changes?

JW: It’s hard to tell, I haven’t been satisfied with my position within the team in a long time for various reasons and I knew that players within the team were doubting my playstyle a lot, which obviously affected me. I have always been kind of afraid that nobody else would pick me up, but after a lot of thinking, I realized that is not a good reason to stay, so I talked with the team about it and said that ELEAGUE will be my last tournament, and one thing led to another.

Many fans were surprised to see KRiMZ team up with flusha and you, instead of sticking to his old LGB teammates olofm and dennis – especially with twist now joining. Was fnatic split inside the team similarly?

JW: KRiMZ has pretty much since day one established a strong relationship with flusha and me outside of the game, though he has also had a great relationship with everyone else as well. He has always been the more “neutral” guy, and I can’t really answer why he chose this and that, I think only he can answer that.

New GODSENT marks znajder’s return to top level play, after a couple of disappointing attempts on Dignitas and HellRaisers. Why do you think he was not able to play at the very top level after his departure from Fnatic? How has he changed in the last two years that he has not played with you?

JW: I think it was unfortunate what happened to him after his departure from Fnatic, he took it very hard obviously and I think it took a big hit on his confidence. Knowing him, both personality wise and in-game, I don’t think an international team is a good fit for him (any team outside of Sweden pretty much) and I do think that had a big part in him not succeeding that much.

After these two years without us, I think he really learned from his mistakes and he also knows that being on the top is not something you can take for granted; you have to work really, really hard for it. Though the same goes for me and flusha, because back when we played together with znajder, as I mentioned before, we had just too much fun and it was our fault too. We have learned as well, and we have learned what it takes to become the best.

Did you consider picking up one of the newer players, such as disco doplan or draken? Why did you not do so in the end?

JW: We never considered picking up a new player, this was the “dream lineup” so to speak. Nobody else got asked, just these players and everyone happily said yes.

Your team now boasts four players from the late 2013 Fnatic roster, with Devilwalk swapped for KRiMZ. Given that team struggled to keep up skill-wise before bringing in olofm and KRiMZ, are you at all worried GODSENT may face a similar issue? If not, why?

JW: I am not worried that this team will struggle skill-wise because everyone is in a different state of their career and I also believe CS:GO is in a totally different meta. Back then, it was phasing in more towards a skill-heavy meta, while now it is going back to kind of a 50/50 split, in my opinion. Also, flusha has never been as motivated as he is right now, and I know what flusha is capable of when he is motivated and wants something very much. The guy is a machine. 😉

Given GODSENT now features three former Fnatic members, you will hold onto the major spot. Did you consider staying on Fnatic at some point, or was it not an option? How important to you was becoming a part-owner in GODSENT?

JW: Of course we considered staying on Fnatic, it is probably the best home out there and we obviously didn’t think GODSENT would be able to buy us out, but I do believe all parties got happy this way – us becoming co-owners just makes us more motivated, because we know every outcome can also affect our own future in a way, and we are involved in every decision and everything that happens so it was a no-brainer to all of us.

What’s the ideal role you see yourself playing in this team? Obviously full-time AWPing, but do you think you’ll need to become more passive to AWP at all times?

JW: The ideal role I see myself playing is simply just being JW. I will need to step up both my aggressive and passive play, but with the team wanting me to AWP at all times, I am ready to work hard for it. So to simply answer your question about my role, I just want to be JW again.

Was there any truth to the rumors about you potentially joining NiP last year? What about this summer? How late was this team actually confirmed, given it was announced mere minutes prior to your debut match?

JW: It is true that I was supposed to join NiP back when they brought allu in, though obviously contracts stopped it and allu took the spot. This GODSENT lineup was decided a bit over two weeks ago, but we couldn’t start practicing because of vacations and contracts etc. until now.

What’s your read into NiP’s issues? Why do you think they stayed out of this shuffle?

JW: It’s hard to say really, I guess they are happy with the team as it is, and I respect that. Virtus.pro are real role models when it comes to sticking together and what not and they prove that it’s paying off. So it’s worth respect in my opinion.

I suggested when pronax left that Fnatic could struggle with leadership once his game plan slowly eroded. Did this happen in your opinion? Was leadership an issue in the dennis-era team?

JW: To begin with, when we changed pronax for dennis, we still had everything pronax built before he left, so we were the same team but with a better individual for X-period of time. But obviously, there comes a time where you have to renew, and I don’t think we necessarily struggled on that, but I do however think that we just forgot what made us so good, and everybody wanted to do their own thing pretty much. So it wasn’t really a lack of leadership, we just had it too easy to win titles that we kind of forgot how we won them, if that makes sense.

What do you think was the issue in Fnatic after olofmeister’s return? Why were you not able to get back to the pre-injury level as a team, when you won six straight tournaments with dennis?

JW: I think a huge part was that when we played with wenton, we realized we couldn’t keep playing the way we did with olofm, because losing such a great player means you need to change things up, and we kind of started to get on a roll with wenton team-wise, I must say. But then when olofm returned, it felt like we just scrapped everything we worked on with wenton, and just tried to play like before and after a while, we got in to the same bad momentum as prior to Columbus, where we were just wasting time when we practiced.

Did you feel the meta game changed with SK’s rise to prominence in a way that required a more tactical approach? If so, how important was it for you to team up with pronax again to play smarter Counter-Strike?

Teaming up with pronax again is great. I have always loved Markus’s in-game calling and how much he actually only cares about the team and winning, he just does what’s best for the team and he comes up with a lot of great ideas. Now with him having his own brand he is building as well, I do believe pronax is more motivated than ever, too.

Are you at all worried that the Swedish scene’s top talent is now diluted too much? Fnatic relied heavily on the high skill level, but now none of you, NiP or Fnatic, boast a comparable skillset. Do you see some of you taking a much larger role in GODSENT than you had on Fnatic?

JW: I don’t believe that is the case. I think all teams have really good players on paper, all teams just need to figure out how to get the best out of everyone together, and that is the hard part. As for roles, I will be going back to full-time AWPing again, and it is pronax and the team’s decision, which makes me even more motivated to become great with the weapon again. flusha will also take a larger role I believe, but in my opinion, he always has had a very huge role, so I think the most pressure is on me, and I am ready for the task.

Your situation aside, what is your read into the coaching rule? Do you believe coaching should be allowed as it has been?

JW: I both like it and dislike it. I used to like that a team wasn’t five of the best aimers, when you had to have everything in the team, but at the same time, when you had a coach as an in-game leader, it also brings out the “best” plays when you have it that way, so I must say it’s a really hard topic for me.

I don’t mind it, but I think it is for the best of the game that we have coaches allowed, so for that matter, I believe coaching should have been allowed just like it was. We were even kind of still in a “transition phase” in my opinion; we haven’t even started to learn how to utilize the coaches the very best way I feel. But I think (maybe it’s more hope?) that they will reverse the ruling.

Final word is all yours.

JW: Big thanks to all the fans supporting us in this move and I really hope people can cheer for both teams and not do the “hate one, love one” kind of thing. Thanks for the interview!