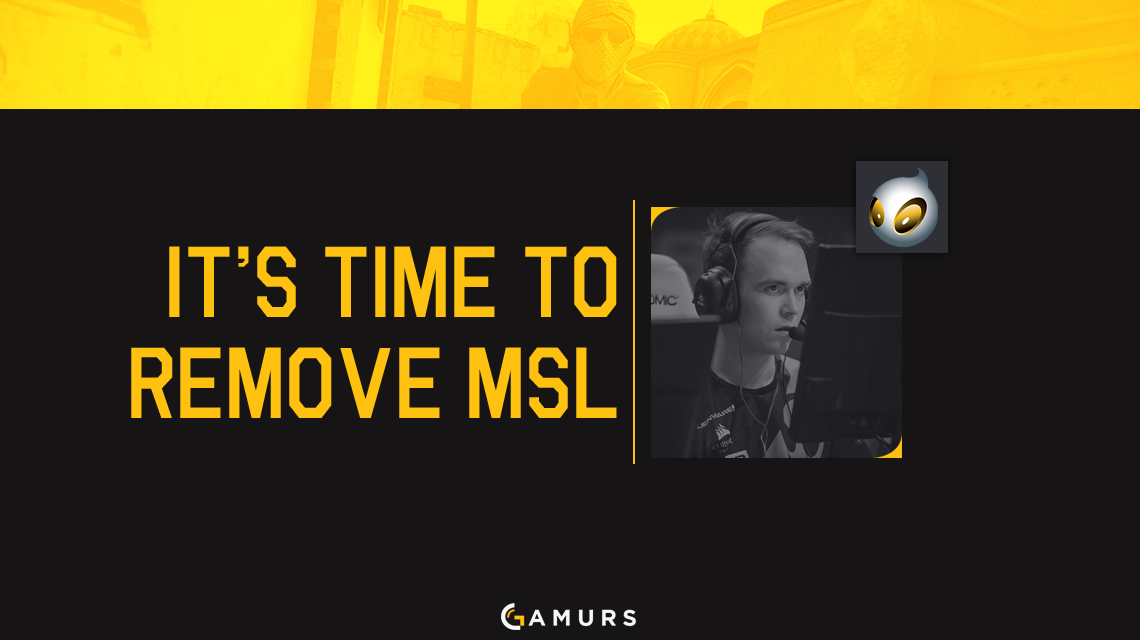 *DISCLAIMER* This is an opinion piece

Often times, the name Mathias “MSL” Lauridsen goes unnoticed. Now is the time to notice what kind of player and leader he is. MSL is a leader who has had some of the best players in the world on his team, yet he has not been able to do anything with them on LAN. He has even gone so far as to ruin the career peak of Jacob “Pimp” Winneche by placing him on the AWP when he is only able to rifle. It really is not hard to make a case for a player with his history’s removal, but since he has been able to slip through the cracks for so long, these things apparently need to be said.

Perhaps, it may be helpful to go through MSL’s career before we go into his mistakes. He came from Counter-Strike: Source and started playing Counter-Strike: Global Offensive early on. Surprisingly, while MSL was on Anexis and Western Wolves, the teams performed quite well. He was part of high placings at tournaments, such as Esports Heaven Vienna and Copenhagen Games, where they faced off against teams that were considered top tier at the time. After that string of a few good tournaments at the beginning of 2013, which can hardly be called legitimate as not all top players from 1.6 had enough time to switch over, the team dropped to the state that Dignitas is at today. In the time after the early good run of events, MSL played with both bad and good players. Predictably, he could do nothing with those teams.

MSL’s leadership skills are absolutely terrible. There are in-game leaders who can turn bad players into good ones, like Kevin “Ex6TenZ” Droolans turning Cedric “RPK” Guipoy into a good player after having to teach him modern Counter-Strike and manipulate him like a puppet. There are leaders that can turn bad teams into good ones, like mousesports with Fatih “gob b” Dayik. Obviously, these are some of the best in-game leaders in all of Counter-Strike; not everyone can be them. But surely, MSL should be good enough to turn a team with good individual players into a cohesive squad that can win tournaments and contest for best Danish team. No, MSL is so bad that he cannot even combine the talent of Pimp, Philip “aizy” Aistrup, and Markus “Kjaerbye” Kjærbye to rise above eighth place at decently sized events. In fact, Dignitas would be better with anyone other than MSL. The level of skill on that team is so high, with little ego – if I may add, that MSL must be assumed to be running the team into the ground. At this point, after losing to Astralis with two stand-ins, one of whom has not played professionally for years, Dignitas would be better off playing with only four players than with MSL.

It is not hard to remember the absolutely disgusting performance by Dignitas at the most recent Major. They had the perfect selection of maps, through no ingenuity of Dignitas, but rather, Karrigan thought that it was a good idea to play Dignitas on their best map and Astralis’ worst map. Dignitas only took this to a three game series because they made a lucky comeback, and that was on their map. Losing to a team with a stand-in would make the losing team a laughing stock. However, losing to a team with two stand-ins and one of them the likes of the current Danny “zonic” Sørensen is sickening. This disaster was made even worse by zonic not playing any Counter-Strike in the past two weeks leading up to the Major. For him to go in and frag better than MSL is absolutely insane.

I wonder how badly Rene “cajunb” Borg was affected by that horrible defeat against his old team. He had an opportunity for revenge. Then, because Kjaerbye cannot compete, he gets an even better chance of revenge, though not a legitimate one. Then, Peter “ dupreeh” Rasmussen gets incredibly sick from appendicitis and cannot play. It could not get better for cajunb. But, with a blind madman like MSL calling the shots, it could get much worse. As it played out, cajunb was the only one on his new team to be positive over the entire series. Again, both the organization and the players missed out on a playoff showing at a Major because MSL.

Cajunb was one of the many players to be hurt by MSL, but Pimp would be the most notable of the group. Pimp is a dedicated, outspoken, open player who has been praised for his gameplay and willingness to be interviewed. He has also been ridiculed for his appearance and strong dedication. Pimp, one year ago, was a top ten player in the world. The only reason why he was not playing on the top Danish team was that there was no spot open in the Astralis clique for the Harry Potter look-alike. Pimp was then relegated to playing the AWP on Dignitas. Pimp is an excellent rifler, but he is not a good AWPer. He can AWP at an NA level, but his rifles were at the highest level in the world. It was obvious to everyone that Pimp should not AWP, except MSL that is, so for someone so dedicated to a pursuit as Pimp is, it is easy to get angry when things go wrong. Pimp has mostly kept this in check, even in light of the hell that MSL put him through. When Pimp was booted from the team, it was a surprise to everyone who knew he was a much more emotionally controlled person. MSL made some snarky comment as he was kicked. This guy made him look bad and flipped him off after he was humiliated. Pimp did nothing in response, proving that he no longer had anger problems and that he was not the source of Dignitas’ problems.

It has not been confirmed by anyone within the team that MSL made Pimp AWP, but it seems likely he did. It would have come down to three things: Pimp taking the AWP like an idiot and showing uncharacteristic behavior, no one wanted to AWP so Pimp took it, or MSL forcing him to AWP. No matter what happened, Pimp should not have been using the AWP. MSL, as the leader of the team, should have made sure Pimp was doing what he was best at, rifling, especially when he was a world class rifler. If the team needed an AWPer, then either MSL should have taken the role as many in-game leaders do, or the team should have kicked MSL for a real AWPer. Because this is MSL’s team, that was not an option, so Pimp was made the AWPer, ruining his career by making him look like a rager and a bad player.

Kjaerbye and aizy were also trapped under MSL’s tyranny. They had shown brilliance, but they were never able to achieve anything. These kids could not say anything to MSL. When Counter-Strike becomes a reality and when your in-game leader becomes a real authority, it is understandably hard for particularly timid gamers to talk back. Fortunately for them, they were able to move onto better teams when their contracts ended. We should be fortunate that MSL’s tyranny was not as destructive as it could have been, but we must not let these close calls be forgotten like the rest of MSL’s failures.

Failing to qualify for tournaments like the MLG Major and leading stars nowhere are bad things, but they are only temporary ills. With regret from those who enjoy Counter-Strike, MSL’s leadership is not so temporary. He has been able to hamper the Danish scene for years, and with suitable replacements available at various times during his tenure, such as Lukas “g1ave” Egholm Rossander and Asger “Acilion” Larsen, he should have been replaced. Hopefully soon, Dignitas will get rid of MSL and organize the remaining Danish talent into a formidable squad.