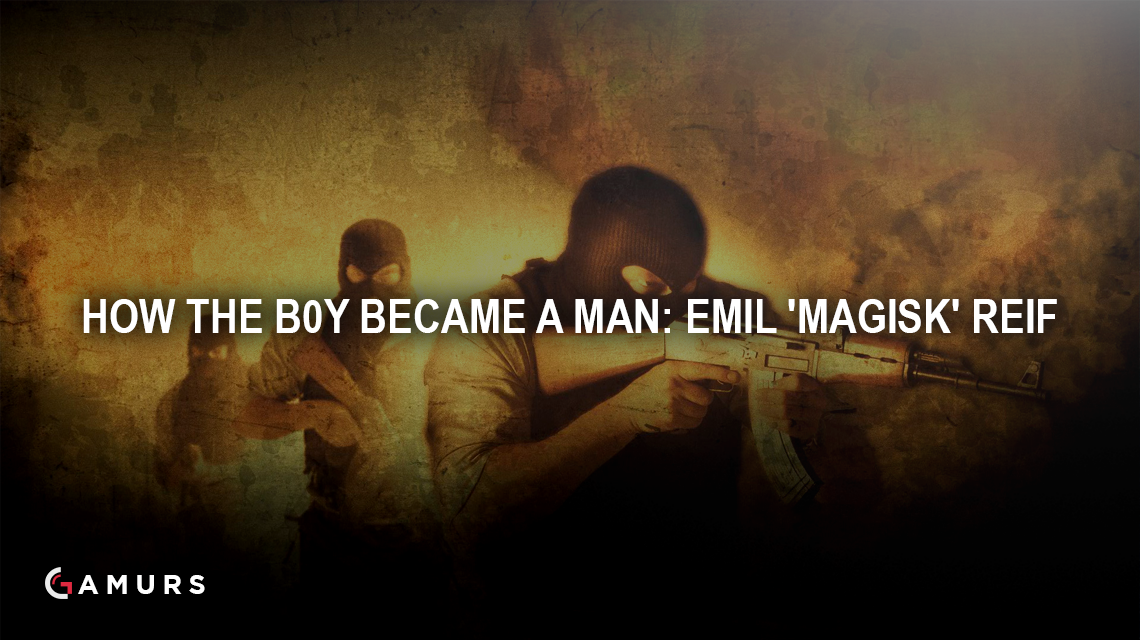 Majors are the penultimate crucible to test a Counter-Strike player’s worth. They offer the most pressure-inducing conditions and fierce opposition the scene has to offer. It is one of the only situations where the men are clearly separated from the boys. Before the ELEAGUE Major, Emil Reif was known as Magiskb0y. Afterwards, he is simply Magisk. The b0y has disappeared, and a man has taken his place.

Earning a name for himself through ESEA PUGs, mix-teams and a short stint in semi-professional play, Magisk relied on the vouching of more established players to get his start. He played his first ever LAN at Fragbite Masters Season 5 as a stand-in for SK Gaming, following the departure of k0nfig. While on an international scale he was unheard of, the stat line he produced against Fnatic forced the world to take notice. Dropping 35 kills in regulation time with a rating of 1.78, his initial foray into the LAN scene at Fragbite showed a degree of comfort, punching far above his weight class.

This performance, alongside a slew of strong online matches, eventuated in Magiskb0y becoming an official member of the SK squad. As he was by far the youngest player on his team, a hunger for success was the driving force behind his play. From day to day, he consistently looked to take the scalps of players and teams that could boast far bigger salaries and far more experience. Intelligent, tempered aggression on CT sides with explosive, second-entry aim on T side, Magisk bought a raw, untamed style that established players could at times struggle to deal with.

He was not without flaws, though. Team communication was an issue, with the young player feeling out of place, at times, amongst the pedigreed players around him. What’s more, although his transition to LAN was relatively smooth considering his lack of experience, this change of environment came with the nerves and angst of inexperience. Magisk himself said that ELEAGUE was the first LAN at which he felt truly confident, implying that the many before it were played with an off-tilted mentality.

While there were many moments that hinted at potential greatness for Magisk, they were never sustained over an entire tournament or day of play. These occasional moments of greatness can bring you onto the front page of Reddit, but they can’t make you a truly great player. His performance at ELEAGUE removed any doubt of his ability to hit and then maintain a peak level.

Dropping 25+ kills every other game and putting the seasoned team on his youthful shoulders, Magisk’s ELEAGUE Major run ended with him having a 1.21 K/D ratio, more total headshots than anyone else at the time of his elimination, and a 1.21 overall rating.

To many people who were too distracted by SK’s organization issues and hadn’t been actively following SK’s runs, this young Dane had come from nowhere and beaten some of the top teams with ease. This “sudden” appearance made him an instant point of inquisition for the community and meant all eyes were on him to see what was next. His rise though, was not sudden; he had been slowly moving up the ranks and silently shocking CS:GO’s best teams.

While the Luminosity Gaming/SK Gaming organizational controversy raged on, analysts and fans kept an optimistic eye on the future for Magisk. This controversy led to the eventual disqualification of Luminosity/SK from ELEAGUE, but it also gave Magisk the opportunity to be picked up by Team Dignitas, who added both the young gun and Cajunb to its roster with open arms.

His journey from becoming Magiskb0y to just Magisk started with SK, but the true development, continued growth and end to his transformation would be with the Dignitas/North line-up.

With the newfound LAN confidence that came as a result of his time on SK, combined with MSL’s system in which Magisk focused on communication and working individual plays, the young Dane flourished. Acting as the star player alongside k0nfig – the man he originally stood-in for with SK – Magisk and his team started to have a big impact internationally, while other teams started to get back from the player break. Back-to-back top four finishes at both Dreamhack Bucharest and StarLadder S2 were both done with Magisk constantly pushing the boundaries of what we expected out of a rookie.

This non-stop momentum of improvement in his individual game and that of his team would culminate in their first ever international LAN win at EPICENTRE 2016. Beating possibly the most intimidating teams on the planet back-to-back, Magisk was, in many eyes, the MVP of Dignitas’s time at EPICENTRE. Truly synthesizing his raw skill and natural ability that manifested in PUGs, the LAN confidence from SK Gaming, and the system and intelligent communication that had come with Dignitas, Magisk was now a true superstar force.

These factors flawlessly blended due to many, many hours of play and constant tournament participation. It was clear by looking at Dignitas’s schedule that they were over-booked with events and the burnout began to show near the end of the year. While Magisk’s individual level never truly dropped drastically below what we came to expect at EPICENTRE, his team’s synergy and team play took a noticeable spike. This led to a string of sup-bar performances, but they still had the latent skill needed to qualify for the ELEAGUE Major and catch the eye of Copenhagen F.C, which signed the roster under the new name of North.

Now playing with a new organization during the New Year, hours before the ELEAGUE Major started and based on the suggestions of a community which had so curiously wondered what could become of him, Magiskb0y became Magisk.

As all good coming-of-age stories go, hpwever, adversity must be present, and the ELEAGUE Major delivered just that for the young Dane.

A rocky group stage that saw t North on the brink of elimination was pulled back in two overtime best-of-one led by Magisk with an average ADR of a 100+ over both games. His teammates were largely missing in these games and it was on Magisk’s shoulders to see how far he could push his side along. But, Magisk’s shoulders were not strong enough to withstand Virtus.pro. During the final game’s regulation time, to make it to the semifinals of the Major, Magisk dropped an astounding 37 kills — well over double the amount of his closest teammate. The game at halftime was 12:3, in favor of North. It ended 16:13, with VP eliminating North. There was nothing Magisk could do, no matter how hard he tried or carried.

After the game, as Virtus.pro exploded out of their chairs in joy, and North looked around aimlessly, Magisk put his hands to his face, then shirt over his eyes, and held back tears.

Young players can lose games and feel upset, but few, if any, have the pressure and ability to exercise their will on the biggest stage possible like Magisk did. Magisk was on the verge of breaking statistical records, but still fell short. He was helpless.

He might not know the feeling of redemption that comes much later after a harrowing defeat, which has the potential to define a hero, but he sure now knows that feeling of giving it your all and failing. That, in itself, forms the foundation of a man.

Is Magisk playing at peak performance right now, or can he get even better? Will he win a major with North? Let us know your thoughts in the comments below or tweet us @GAMURScom.