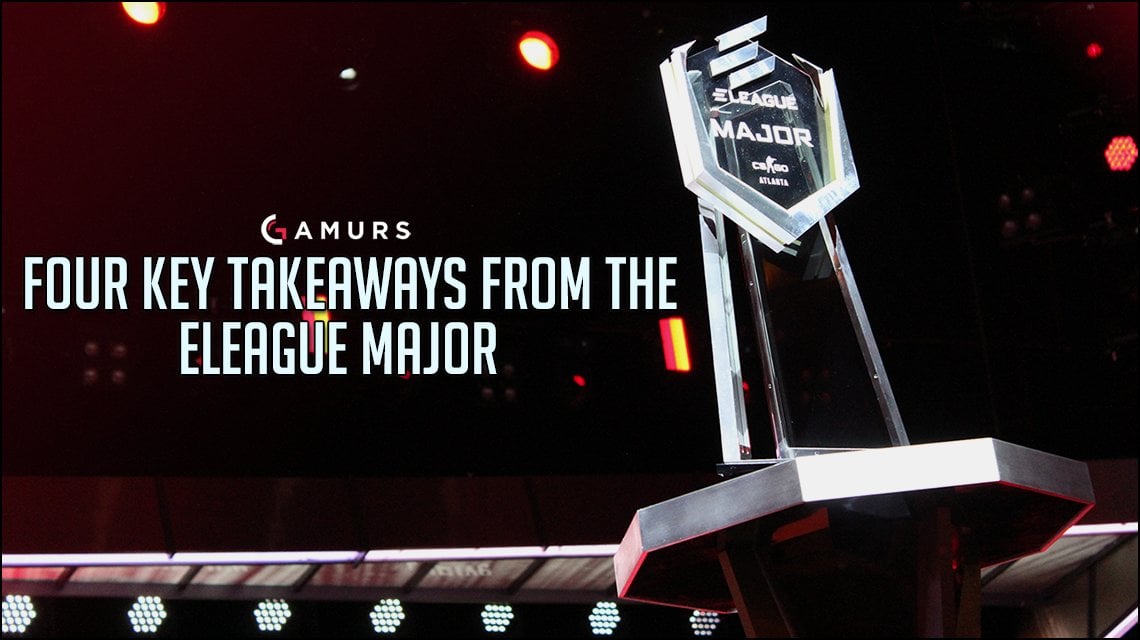 This past week saw sixteen teams compete for a $1 million dollar prize pool at the ELEAGUE Major – a major which many considered to be the most competitive in Counter-Strike history to date. This was likely aided by the implementation of the Swiss format, which matches up teams with the same win/loss record as each other, and prevents them from facing teams that they have already encountered.

We saw some phenomenal matches throughout the course of the event – SK Gaming versus Astralis, Virtus.Pro versus North, SK versus Virtus.Pro, and Astralis versus Virtus.Pro all come to mind – in fact, this was some of the best Counter-Strike we’ve seen in a long while, thanks to an almost month-long break. The level of the teams going into the event was incredible, and it truly allowed for the game to be showcased in all of its glory. This isn’t the end of great matches for the year either – it’ll get even better, as some teams weren’t quite 100 percent at the event.

One of the few shortcomings of this Major lay in the rumours of impending roster changes – as Janko “YNk” Paunovic put it, “it’s insane to think that 1/4 of the teams at the Major potentially already know that they’re shuffling rosters straight after.” These teams include SK, G2 Esports, Team EnVyUs, GODSENT, and possibly Fnatic. All of these teams contain some of the world’s best players, and the future looks to be bright with – at the very least – a French superteam on the horizon, and SK back to a dedicated roster.

This means that a lot of the teams we had the pleasure of watching at the major will only improve going forward, and it opens up the opportunity for a lot of potential storylines in 2017.

FalleN versus gla1ve, SK versus Astralis

Lukas “gla1ve” Rossander has clearly reshaped Astralis for the better – in the short time that he has been on the team, they’ve placed second at ELEAGUE Season 2, and won ECS Season 2 and the ELEAGUE Major. Not only has his restructuring of the team been effective, but his mid-round calls have been phenomenal, and have demonstrated his clear understanding of the game.

When pitted against SK’s Gabriel “FalleN” Toledo – who was considered the best in-game leader of 2016 – gla1ve struggled, though not so immensely that he was unable to be an effective tactician. SK defeated Astralis on Dust II during the group stages, though it was a narrow win in overtime; however, I feel that this will be something to look out for in the first half of the year. Once SK has a stable roster, I believe that SK versus Astralis will be the new “el classico” of 2017 – just like SK/LG versus Na’Vi was the “el classico” of last year.

The calling from the two in-game leaders is quite unique – both run intricate strats, but are also able to adapt mid-game to their opponent’s offense & defense. This means that when the two teams play one another, we’ll have the opportunity to witness what are currently two of the greatest minds in Counter-Strike battle against each other, and watch as each leader tries to adapt against and out-think the other.

The past few years of Counter-Strike have yielded many incredible duos – GeT_RiGhT & f0rest, TaZ & NEO, olofmeister & KRIMZ, coldzera & TACO, Magisk & k0nfig – the list goes on, with some being more legendary than others. A small number have been together for years, while others are more recently formed. One such duo was unveiled in great strength at the ELEAGUE Major – that of Nicolai “dev1ce” Reedtz and Markus “Kjaerbye” Kjærbye.

Though they played together for a number of months before the major, the Danes’ strength wasn’t really unveiled until gla1ve took the reigns – from there, Kjaerbye improved rapidly, and soon became the second star of the team alongside dev1ce, allowing dupreeh to play with less pressure on himself. Despite Kjaerbye being incredibly young, he proved himself to be an incredibly stable fragger, and ensured Astralis took the win over Virtus.Pro with his own heroic performance.

The pair look to be extremely strong going into 2017, and their matchups versus other duos should be extemely interesting.

Virtus.Pro – Never to be counted out

Despite their issues earlier in 2016, Virtus.Pro fought back with a vengenance towards the later half of the year, and didn’t stop when the major rolled around. Stellar performances across the board absolutely crushed the criticism that some of the players were too old, and showed how Virtus.Pro can never be counted out of a tournament. Snax was a monumental influence on their performance, as he once again proved himself to be worthy of his title as the fifth best player in the world (according to HLTV.org).

Virtus.Pro looks to win the next event, and wants to take the fight to Astralis – after the ELEAGUE Major final, Kjaerbye tweeted out that he felt his team underperformed, but were grateful for their win. TaZ replied to him, stating “Hard lose. @KjaerbyeCS wrote that Astralis underperformed. I promise u here – we will crush u next event, please perform then. GG today.” Virtus.Pro isn’t backing down any time soon, and it’ll be interesting to see the games between VP, Astralis, SK, and NaVi in the early half of 2017.

A number of events in 2016 led to the demise of most skin betting sites – especially those for professional matches. Many individuals thought that this would lead to the decline of CS:GO as a spectator esport, as they believed that people wouldn’t watch matches without financial investment. This was proven wrong, not just by stellar viewership numbers throughout the tournament, but also by the peak viewership in the grand finals – for the first time in Twitch history, their platform held host to one million concurrent viewers on a single stream.

This is an astonishing achievement for CS:GO, but more importantly an incredible milestone for esports as a whole. This number will only keep growing throughout the year, as more and more people are introduced to the concept of esports through mainstream media publications and matches being aired on television.

All in all, Counter-Strike doesn’t look to be going anywhere in 2017, and the roster shuffles that should be happening will only help elevate how competitive the scene is at the moment. The sheer number of teams who can win events is amazing, and with new rosters on the horizon, that list will only grow. The storylines presented to us from the ELEAGUE Major give us great things to look forward to at the beginning of this year.

Can Counter-Strike continue to grow this year? What did you learn from the ELEAGUE Major? Let us know your thoughts in the comments below, or tweet us @GAMURScom.