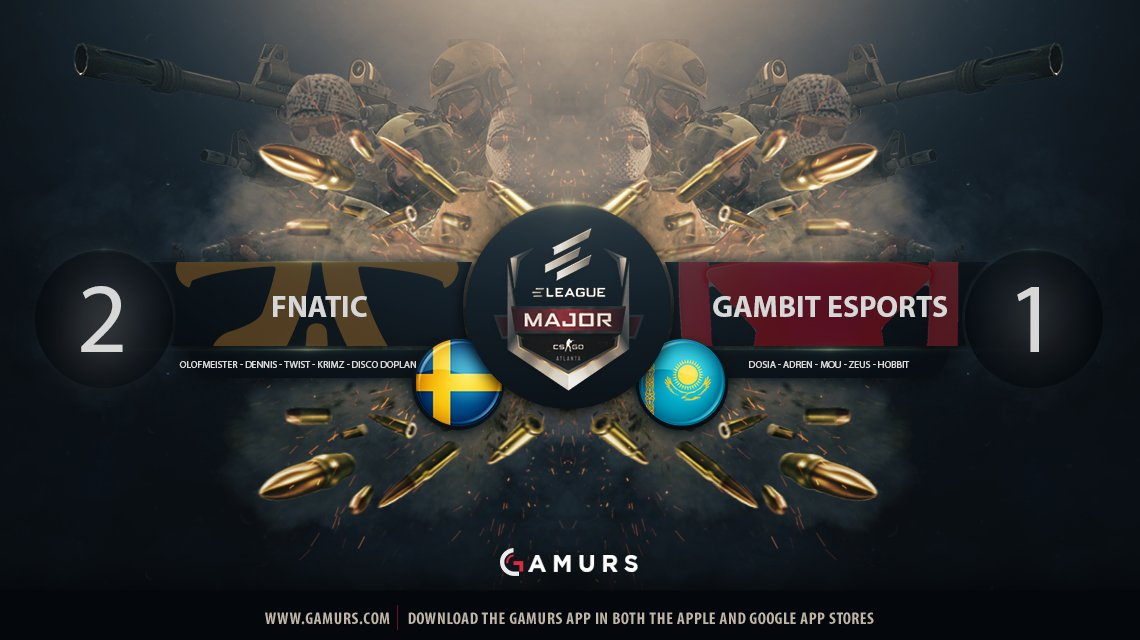 The map veto favored Fnatic heavily, according to the analysts (and myself). It went as follows (courtesy of HLTV.org):

Most analysts predicted this to be Fnatic’s map – Zeus famously hated Cache when on Na’Vi, and it seemed unlikely that Gambit would be able to triumph on it in its first official match against a top tier team.

It looked like Gambit was set to prove everyone wrong, as they picked up a very quick pistol round on their CT side, but a force buy from Fnatic swung the advantage right back into their favor as they picked up their first three rounds. The first real gun round of the half went Gambit’s way, thanks to a triple kill from AdreN – a player who has really been stepping up as a star for Gambit at this major. Unfortunately for Zeus and company, Twist seemed to like AdreN’s triple kill so much that he responded with one of his own, picking up three AWP frags to secure the second gun round, and immediately resetting Gambit’s economy. This enabled Fnatic to dominate Gambit for seven rounds, putting them in a 10-2 lead before Gambit answered back by picking up the remaining three rounds of the half.

A perfect call from Zeus had Gambit attacking B site, which twist was holding by himself – no one from Fnatic was able to grab a frag, and Gambit picked up its second pistol round of the match. With no one dropping once again for Gambit, the team looked like they had a chance to begin a comeback against Fnatic, but once again a force buy from Fnatic had dennis picking up a triple kill with a deagle to bring the economy back in the favor of Fnatic. This force buy victory aided Fnatic in picking up four unanswered rounds, bringing them up to match point before Gambit finally replied back with their second round of the half. This second round meant nothing to Fnatic, as they proceeded to crush Gambit out of the map in the following round.

Gambit kicked off Overpass on the T side, and once again won the pistol round thanks to mou grabbing a quadra kill. This time, Gambit didn’t falter to pistols and even managed to clutch out a one-on-two to secure the first gun round. Fnatic responded back by picking up the second gun round, but the team was reset immediately despite twist’s best efforts to hold down B site with three kills. Gambit went on to win six of the eight remaining rounds in the half, and Fnatic grabbed the last two for a half-time score of 12-3 in favor of Gambit.

Gambit, clearly keen to prove their prowess with pistols, picked up the second pistol round on Overpass as well – making it 4/4 pistol rounds for Gambit in the series. Fnatic, up against the wall, force bought, but it was all for naught – Gambit closed out the map with ease, locking Fnatic out of the map 16-3.

After failing to win either pistol round on Overpass, Fnatic finally succeeded in winning its first pistol round of the series. Olofmeister and company continued to dominate the following three rounds by utilizing a vastly underrated tactic – rush B. Fnatic’s domination didn’t stop there though, as they continued to chain together rounds to put them up 8-0, at which point Gambit finally responded with six rounds of their own, only conceding one round to Fnatic in the interim to end the half 9-6 in favor of Fnatic.

Fnatic dominated the second pistol round, making it two for two on the map, and two out of six in the series. They then proceeded to dismantle the Gambit offense, pulling themselves up to a 14-6 lead before Gambit responded with a single round, at which point they were immediately reset. Gambit’s lack of economy hindered them in the following round, and Fnatic closed it out to move on in the tournament.

Fnatic will face Astralis in the semifinals tomorrow, and Gambit has been eliminated.

Did you expect Fnatic to win? Can they win it all? Let us know your thoughts in the comments below, or tweet us @GAMURScom.