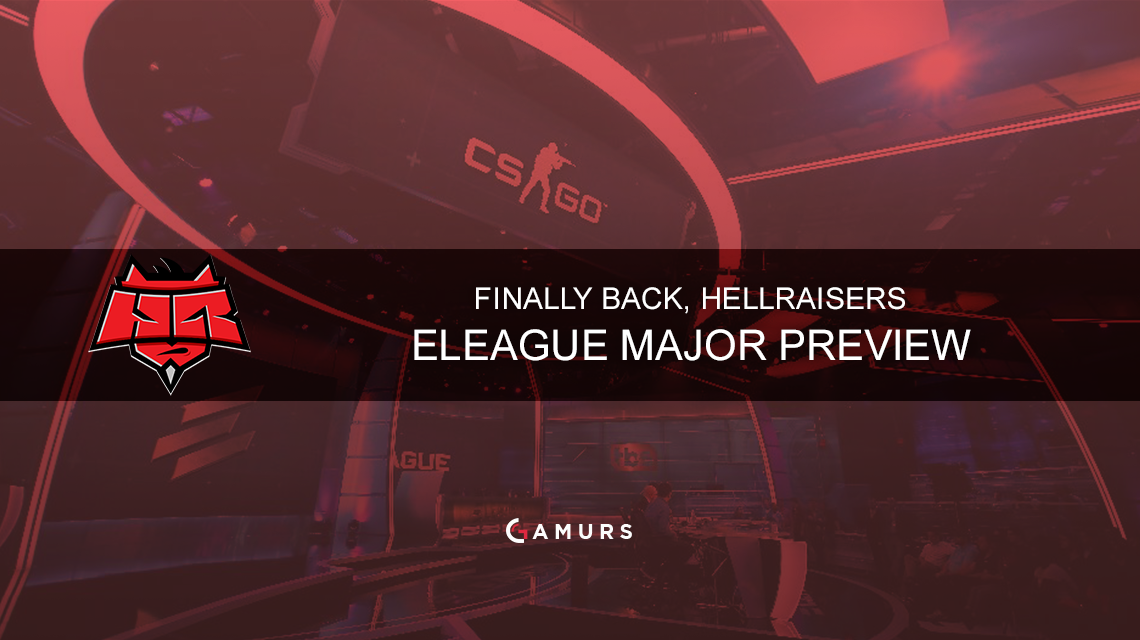 The HellRaisers are officially back. The team, from Europe’s region of Counter-Strike: Global Offensive, will be competing again in a major tournament after missing out on qualifying for the last four. The team had an impressive journey to get to the major and will be looking to make their mark at the ELEAGUE Atlanta Major.

HellRaisers is made up of captain, Kirill “Ange1” Karasiow, Martin “Styko” Styk, Patrik “Zero” Žúdel, Vladyslav “bondik” Nechyporchuk, and Bence “DeadFox” Böröcz. The team has only been together since September of 2016, but have already played some of the best HellRaisers CS in recent memory.

Their road to the major kicked off in the second European Minor championships where they, after finishing second in their four team group to Epsilon Esports, defeated Space Soldiers and GODSENT in bracket play to qualify for the major. However, they ended the tournament losing 2-1 in finals to GODSENT and looked to be a tossup to make the major.

At the ELEAGUE Atlanta Major Qualifier, HellRaisers started out blazing hot with a dominating 16-6 win over mousesports. They followed that up in a highly contentious second round matchup, defeating seasoned pros Ninjas in Pyjamas 19-17 in a thrilling overtime match. That win placed them only one match away from qualifying for the ELEAGUE Major, but also seemed to place a lot of pressure on their relatively inexperienced lineup.

Their next qualifier opponent was GODSENT, who they had split 1-1 with at their minor championship. Unfortunately for HR, in an albeit competitive match for them, they fell 16-11 to the Swedes of GODSENT. The loss prevented them from qualifying at the time and set them up with red-hot OpTic Gaming in the fourth round. Despite playing well, a common theme for the team, they dropped the map 16-10 to OpTic and were faced with a dreaded fifth round winner-take-all qualifying matchup.

For the high stakes matchup, they were paired up with NA’s Cloud9, who also had missed the last major and were looking to go back. In the match, Bondik went off for HR, and finished with a 23-15 scoreline to lead his team to victory and the major qualification. Despite falling behind 9-6 at the half, on Overpass, they came back with a very strong 10-4 T-side and pulled off the upset.

HellRaisers has undoubtedly had one of the toughest roads to the ELEAGUE Major and performed at a high level throughout to do so. The team, although not the most experienced, could be a surprise pick to pull off some upsets, especially in the best-of-one map rounds. Advancing to the quarterfinals – which is possible by winning three of your first five matches – means an automatic spot in the next major, which for a team who has struggled like HR did to qualify in the past, is as good as gold.

No one has led HR more than DeadFox and Bondik, who have both been very solid and productive players as of late. At HellRaisers’ most recent LAN event, the DreamHack Las Vegas Europe Qualifier, Bondik posted a very good 1.09 rating, while DeadFox, who will be competing in his first major, posted an incredible 1.15 rating at the ELEAGUE Major Qualifier.

Post ELEAGUE Qualifier, HR had a bit of a disappointing finish at the DreamHack Las Vegas Europe Qualifier, with a top-eight finish. Despite that, their recent performances have been trending up, and if DeadFox and Bondik can once again lead the team, the potential is there for a strong performance at the ELEAGUE Major.

How do you think HellRaisers will do at the ELEAGUE Major? Let us know on twitter @GAMURScom.