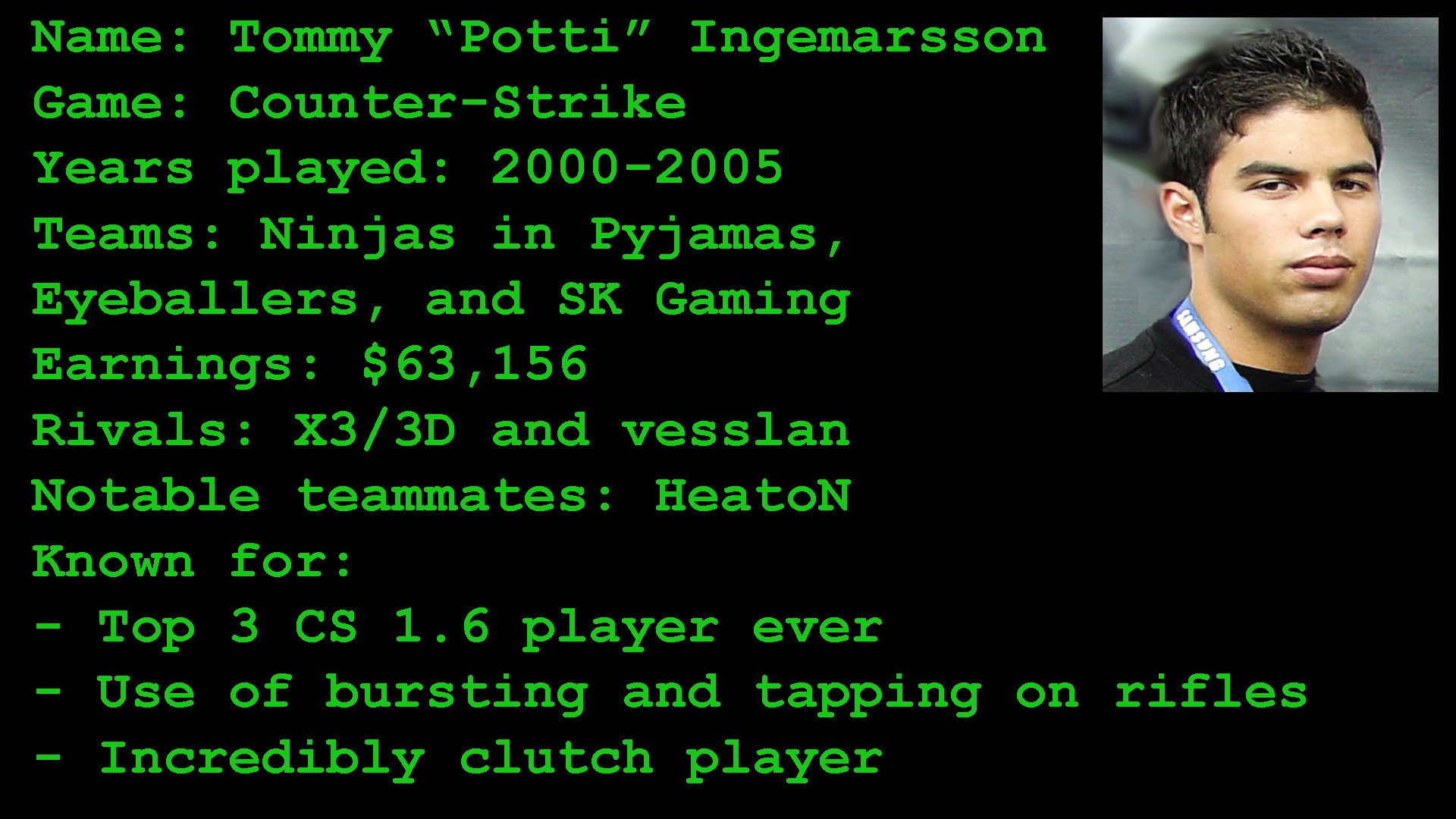 Hi, I’m Bleda. I have been around esports longer than most fans, but that doesn’t mean much when most people have been around for less than a year. I became aware and fascinated with esports with StarCraft 2, but my interest really took off with League of Legends. Now, I have moved onto Counter-Strike and haven’t looked back since. For this series, I am looking back into the past, beyond my tenure in esports, to provide a digestible history through the lens of a modern esports fan for those who weren’t around to experience it first-hand, like myself.

For my first exploration, I chose one of the best players to ever touch Counter-Strike: Tommy “Potti” Ingemarsson. In the trifecta of top players, Potti ranks third and is joined by the immediately recognizable players of Patrik “f0rest” Lindberg and Filip “NEO” Kubski. To be associated with such players is definitely no small matter, and through that association, the modern fan immediately has an idea of just how good Potti was. During the time of CS 1.6, f0rest won the most tournaments and NEO won the most Majors, but it was Potti who was the first to master the game.

Potti was stuck in a boring office job. From a coworker, he learned about video games, specifically, Half-Life. After playing many hours of Half-Life, Potti discovered Counter-Strike in Beta 1.0, which was a mod for Half-Life. Potti was immediately good at the game, and he was accused of cheating left and right. It was only once he played on LAN that the cheating accusations disappeared. Potti’s skills surfaced immediately, under pressure on LAN and online, he was a force to deal with. Potti poured his heart and soul into the game. After an update, Potti and Emil “HeatoN” Christensen spent hours in an empty server shooting at walls to learn spray patterns. Before such competition was called esports, before sports visas were given to pros, before there were massive salaries and equally massive arenas, HeatoN and Potti were dedicating their lives to the game. In turn, the two dominated their era.

Potti made his first proper LAN debut with Eyeballers. Before that, he played on Ninjas in Pyjamas with his friend Christoffer “Tootzi” Olsson. They were the best Swedish team online, but they were not around long enough to play on LAN. Eyeballers isn’t a name that many recognize today because the organization died out, but they still commanded some legendary lineups and the respect of esports fans at the time. Potti’s first tournament was 2000 CPL Europe in Cologne, Germany. Normally, this would be irrelevant to mention, but Eyeballers was involved in Quake as well. Since one of the CS players for the team couldn’t make it, one of the organization’s Quake players named litzer stood in, and the team took fourth. At the next event, Babbage’s CPL 2000, the same player missed his flight and litzer stood in yet again. Only two of Eyeballers’ starters were playing. One missed his flight and the other two didn’t meet the age requirement for CPL events, so stand-in’s were needed. It was some stroke of luck that litzer was able to stand in for them at two events in a row. Their fourth place finish was quite remarkable, especially since litzer had never touched Counter-Strike before, but Babbage’s was a whole different ballgame. They were in Dallas, Texas and playing against best teams. They needed to perform, but how could they? Even in the face of impending doom, they managed to top their last result with litzer and took first place at the biggest event of the year.

At Potti’s first CPL, one of the Counter-Strike greats was also in attendance – Jørgen “XeqtR” Johannessen. XeqtR was a Norwegian player who found himself in teams with Americans, Swedes, and Danes. XeqtR was fantastically skilled, but he also had problems when it came to the personal side of being on a team. XeqtR played in a mixteam with Potti, and later that year, Potti revived the Ninjas in Pyjamas lineup. The lineup would include HeatoN, Potti, XeqtR, Johan “Hyb” Carlund and Erik “Medion” Engström. Both Hyb and Medion fell away from Counter-Strike and have become forgotten, since they weren’t as dedicated as the others, but they were both skilled players.

During this phase of NiP, the players established themselves as a winning lineup. They won all of the events they attended in 2001. There are a few small things to note, though. 2001 CPL Winter Championship was the biggest event of the year, which NiP obviously won. Given that it is so hard to win an event, many fans would assume that the lineup at CPL Winter was the one that NiP always used, but they would be mistaken. At this LAN, Michael “ahl” Korduner and Johan “vesslan” Ryman joined the team. The final of this tournament was between the two best teams of their continents. As it played out in the series, NiP had a sort of magical factor that we associate with them today. NiP was having trouble at one point in the series and the players were arguing, then, Potti decided to take over the gae. Potti was described as being filled with adrenaline and needing to take it out on his opponents. One of the players on the other team, Brian “BigDog” Ray, described the experience as extremely frustrating, and said it was as if he wasn’t able to get a grip on the game. Like a true champion, Potti took the game into his own hands.

Potti didn’t play in very many events in 2002, as he and the rest of the team were worried about sponsorships and whether or not they could afford to go to events. The team was promised money in the future, but there was nothing at the time. The players left their organization and joined SK Gaming. The 2002 lineup was definitely a force to be reckoned with, but they weren’t quite the team that they would be in 2003. One very funny story from this year comes from the third place result at CPL Winter. SK took third, which is a very good placing, but the players appeared to be in a worse mood than those who finished in last. They looked like a close family member had died. They were that dedicated to winning; they were that used to winning. Losing just destroyed them. They were a different breed.

As mentioned earlier, SK Gaming 2003 was the high-point of all of the players’ careers. They were an unstoppable force like Fnatic in CS:GO, but better. The team took off when Ola “elemeNt” Moum joined, kind of like how Fnatic was transformed after Olof “olofmeister Gustafsson joined. The players reported that SK Gaming seemed to gel somehow. Everyone was on the same page, not just HeatoN and Potti anymore. But before that, there was another lineup with its own merits: ahl, Potti, HeatoN, Christoffer “brunk” Elfving, and Christer “fisker” Eriksson. They were making it to, at least, the semifinals in every event they were playing. And that was in an era when there were few tournaments, making those results much better than they would be in the contemporary era. Still, SK felt the need to make a change, and elemeNt stepped in.

ElemeNt joining SK Gaming marks one of the best LAN streaks ever. Sure, esports wasn’t as “professional” as it is now. Sure, there wasn’t a million dollars on the line. But the pride was a whole lot more valuable to these teams than money ever was, and they managed to put on quite a show. It may not be 87-0, but it was still something. SK Gaming lost only one out of 42 games. In an era when there was not nearly as many competitions, not even as much as there was in early CS:GO, that was amazing. As such, SK Gaming 2003 is frequently cited as one of the best lineups ever. This streak didn’t last for long, though, and it didn’t fail because the players became bad at the game, stopped trying, or had bad chemistry. It was precisely the opposite of that. Before 2004 began, elemeNt left the team because he wanted new challenges. He was also prone to socializing with players other than those on his team. One day, elemeNt decided to leave and join NoA with some of his newfound friends. This team featured players like Griffin “shaGuar” Benger, but it was no SK, and because elemeNt left SK, 2004 was not a successful year for Potti. However, elemeNt leaving SK wasn’t all bad, because the young Abdisamad “SpawN” Mohamed got over his nerves and became a great player on SK.

In 2004, SK won only one LAN, and that was without Potti. Potti had a disagreement with the organization, and he stopped playing for the rest of the year. Daniel “Hyper” Kuusisto played in Potti’s place, and when the year was over, the whole team, Potti and Hyper included, went over to Ninjas in Pyjamas. Even though Potti and HeatoN were still on the team, SK 2004 was a train wreck.

2005 was Potti’s last year, and it was a decent year to end his career on. He started out on NiP’s bench, but finished the year with a fourth place finish at CPL Winter. Though he did get a top finish in 2005, it was not at a tier one event. In 2005, Potti took fourth place at WEG, a two month tournament in Korea broadcasted on Korean television. Potti quit just when the game was on the rise.
2006 is often considered Counter-Strike’s best year. Potti was playing the game before Counter-Strike got big, before epsorts got big. If the demos still existed and if esports was just as big back then as it is now, then Potti would be even more highly regarded than olofmeister. Olofmeister has more tournaments to show off his skill, better conditions to play under, and a higher salary. Think of those benefits that olofmeister receives not as a vindication of how good olofmeister is, but as a vindication to what Potti managed to do without those things. Potti was a god, regardless of the fact that he was around before Counter-Strike and esports became big.

Do you think Potti is one of the best Counter-Strike players in history? Let us know your thoughts in the comments below or tweet us @GAMURScom.