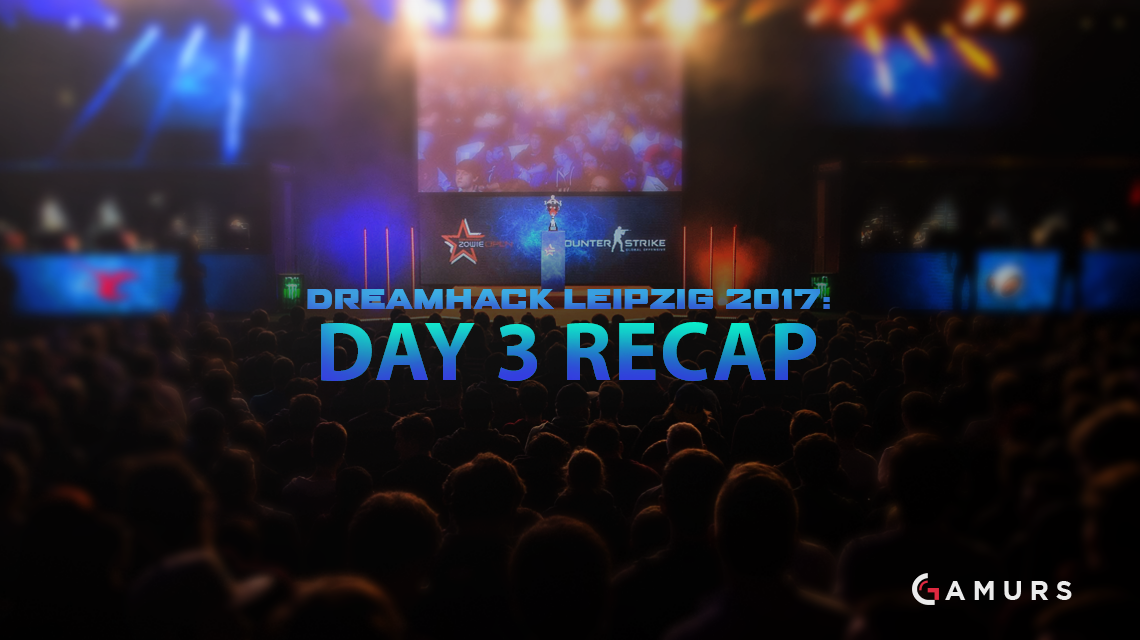 This weekend is the first of many DreamHack events for 2017. Although the teams may not be considered Tier One, this tournament promises to be as competitive, if not more, as those before it. Here in snowy Leipzig, eight teams will battle it out for the title of DreamHack open champions and the lion’s share of $100,000.

We will be providing live coverage of the event from DreamHack itself on our Twitter: @GAMURS_CSGO. You can also follow us on Snapchat for exclusive pictures from the expo and the event: gamurscom.

This article will be updated live as the matches happen so make sure you check back regularly:

FlipSid3 strung two rounds together at the start of the match before a Kevin “Ex6TenZ” Droolans clutch put the score at 2-1. FlipSid3 bounced back by splitting the A site and pincering the trapped CT’s. FlipSid3 kept the pressure on, which forced LDLC to pause the game after being down 6-1. The pause was easily overcome by the relentless FlipSid3, who stormed the three CT’s in mid and opened up the round, winning their seventh round. LDLC then found their feet slightly, and picked up three rounds without too much of a reply from FlipSid3. The half ended 11-4 with FlipSid3 having a comfortable lead over LDLC as they move onto the CT side.

Second pistol round went the way of LDLC but they failed to convert the following two rounds despite the bolstered arsenal. They did increase their round count against a frequently forced up FlipSid3, bringing the score to a 12-8 standing. After FlipSid3 stabilized their money, they didn’t show any cracks in their armor, turning 12-8 into 16-8 and taking map one.

Nuke looked like it would be business as usual for FlipSid3 as they came out of the gates hot. However, by the end of the first half, LDLC showed more ingenuity than they did on Cache and put eight T rounds together on their half; FlipSid3 stood on seven rounds at half time.

FlipSid3’s Terrorist side was what you would expect from a team featuring B1ad3: a well prepared unit grinding out rounds. FlipSid3 took the lead up to 14-8 before LDLC finally won a round on the CT side. The game already seemed lost for LDLC at that point, and FlipSid3 closed out the map wih a 16-10 scorline, sending them through to the grand final to meet either Heroic or BIG.

BIG claimed the pistol round, much to the delight of the packed crowd, but then went downhill from there, finding themselves 8-2 as Heroic played a fantastic Terrorist side on Train. An inspired performance by the star of Heroic allowed BIG little room to breath, as Valdemar “valde” Bjørn Vangså wrecked the home team and helped Heroic build an 11-4 lead by halftime on their T side campaign.

Looking out of the game, mentally, BIG was unable to win a round on their T side before Heroic had picked up the five they needed to win the map. The final score on Train was 16-4.

BIG started off the map in spectacular fashion, building a 8-2 lead at one point through a solid CT defense and ending their defensive half on 10-5. On the T side, however, they crumbled. Heroic quickly brought the score to 11-11, before BIG halted their momentum with a pistol-buy win against the rifles of Heroic. Heroic later pushed BIG onto an eco, which they were then undone by as BIG claimed another round and leveled the score once more, 13-13. The back-and-forth nature continued until BIG was able to edge Heroic out of the game, taking Dust II 16-14 and forcing a third map.

Heroic won the pistol round on Cobblestone and then chose to bring four UMPs to the second round. BIG capitalized on the SMG-heavy buy from Heroic and immediately struck back to bring the score even at 1-1. They punished the primarily-Danish squad further by tallying up two more rounds before Heroic was able to grab one of their own again. Knowing the game had huge magnitude, Heroic called a tactical pause when they were down 5-3, to try and put themselves back on the winning side. The teams kept trading rounds out until the score settled 8-7 at halftime, in favor of BIG.

The second half witnessed BIG gain a huge spur of momentum as they swiftly crushed Heroic on Cobblestone, barely allowing them to win any rounds as the score ended 16-9 to BIG, meaning Heroic only gained two rounds compared to BIG’s eight. Heroic was sent home, and BIG will play FlipSid3 Tactics in the grand final in Leipzig.

The grand final kicked off with the two teams meeting on Cache, where BIG started on the CT side. The early portion of the game was very tit-for-tat as each team wrestled for control of the economy and early-game dominance. FlipSid3 finally put some distance between themselves and BIG when they made the score 7-5 on their Cache T side. The half ended in favor of FlipSid3 Tactics, who finished with a 9-6 score on the T side.

FlipSid3 continued to lengthen the gap between themselves and BIG by taking the second half’s pistol round and the following round after that, before BIG logged their first T round of the map. FlipSid3’s Cache defense proved too strong for BIG to crack as the score slowly creeped closer to 16 for FlipSid3. BIG called for a tactical pause when the score reached 14-7 in an attempt to divert the game back into their favor, but the CIS team was too strong and closed the map 16-11.

FlipSid3 started on the Terrorist side of this map, which is generally thought of as CT-sided, but that didn’t stop them from establishing an 8-4 lead over BIG. It was at this point when BIG added another round to their CT campaign, looking like they could still salvage the half. That win seemed to invigorate them, as they then took the last rounds of the half, which ended the half 8-7 in favor of FlipSid3.

The second half was not so dominated by FlipSid3, instead being a more even affair between the teams. BIG did get beaten by a low arsenal of the CIS squad which prevented them from building a lead themselves. FlipSid3 capitalize on BIG’s mistakes and pushed the scoreline to 13-11.

The valiant BIG couldn’t bring themselves to recover, and ended up losing the map 16-11 and placing second, crowning FlipSid3 as the DreamHack Leipzig champion.

This article wil be updated throughout the day with all the action as it happens, so be sure to bookmark it and check back later.

What was your favorite moment from this tournament? Let us know in the comments below or by tweeting us @GAMURScom.