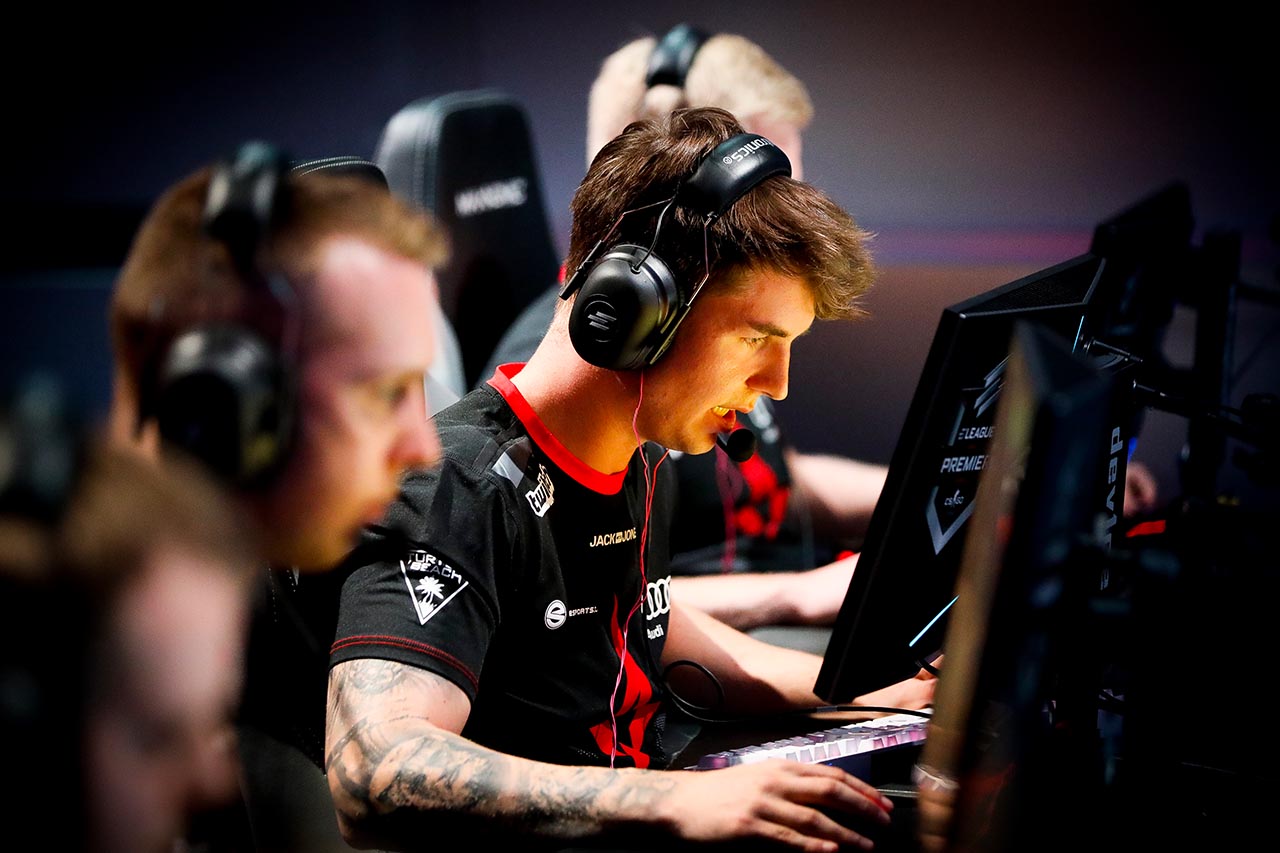 Astralis look like one of the best teams in the world right now at the ELEAGUE CS:GO Premier, and there’s no doubt about it. The Danes are gearing up for their upcoming semifinal match vs. Mousesports, which well take place tomorrow at 1pm CT.

Following the group stage of the $1 million event, Nicolai “dev1ce” Reedtz is the highest rated player with a monstrous 1.59 HLTV 2.0 rating. With his current form in mind, it’s going to be difficult for Mouz to topple the Danish firepower, especially since they have a new player in Janusz “Snax” Pogorzelski. Astralis are an obvious favorite going into the matchup, but they’re still humble about their position in the world standings before the player break in August.

Related: Astralis best Cloud9 in the opening match of the ELEAGUE CS:GO Premier

Dot Esports spoke briefly with Dev1ce and Andreas “Xyp9x” Hojsleth in a conference call days before their playoff match vs. Mouz. The duo discussed their upcoming match against Mouz, the team’s mentality on and off the in-game servers, and the near future in CS:GO.

You are going up against Mousesports next, who just barely beat Fnatic on Wednesday. How have you been preparing for that matchup?

Xyp9x: We have had off four days now, and obviously that’s a new thing for us. The first day, we took a day off, we relaxed, went to the Coca Cola Museum and stuff like that. But other than that, we have been practicing [Wednesday], and we will also practice [Thursday]. So you know, being prepared is one of our key things. I do not think we have ever had two days to prepare for a match-up like this during a tournament. It is going to be fun to see how that plays out in the game, like if there are any mind games and stuff like that.

The last time you faced mousesports was at IEM Sydney. You faced and beat them twice. What are your thoughts on the team right now, the differences between STYKO and Snax, and how do you think that change has influenced the team?

Dev1ce: First of all when we faced them in Sydney, it was a different team. So they definitely have changed some things. They are having quite a bit of success here at this tournament. I think it’s hard to compare Snax and STYKO really, but it seems like they have a good cohesion with Snax. Going into the matchup for us it’s all about preparation, we have a lot of time to prepare for it. I hope that benefits us in some way. It’s hard to say if [Mouz] is looking stronger, but they are looking more like a team right now.

How do you feel about the team morale right now on Astralis?

Dev1ce: Our morale is great. We did not have the best preparation going into this tournament, since this has been a very stressful period. I think it has been the same for all the teams. Other than that, I think we are enjoying our time together. It is the last tournament of the season, so having a lot of time together we are having a lot of fun. The team spirit is high. There is not anything negative for sure. It is just a grind, and we are enjoying our time together.

What exactly about this period is really stressful, considering the break is coming up?

Xyp9x: I think what makes this really stressful is all the tournaments we have gone to. I think people are kind of worn out and looking forward to the player break. There is that, and the fact we are also spending so much time away from our families, friends, girlfriends, etc. It’s really hard on some people. I think we have like 160 travel days a year, so it is not like we are seeing them a lot. There’s all these things in mind, and I also think we are one of the hardest grinding teams–practice-wise and professional-wise–[while] doing workouts and stuff like that. I think all in all its just also the things we’re doing as a team, which also makes it more stressful.

There has been a lot of talk in the last few weeks about whether this is the Astralis era. After finishing in third/fourth place in Cologne, how important is it for you to win a trophy again?

Dev1ce: We got knocked out pretty early in Cologne, at least according to our expectations. We were going into the tournament expecting to win. We had had a really good preparation and so on. So yeah, we were a bit rattled by the loss I would say. We always attend tournaments with the one goal to win, and it is really important for us to win here, because have had final losses here before. We feel really confident here, and it would be really great going into the break being the best team in the world still, and having that edge going into Stockholm and the Major. It’s going to be a really tough period after the break, so the result here matters a lot. Regarding the [“Astralis”] era, it’s not up to us to state whether there is an era going on. But we are going to keep grinding for that top spot.

Do you think that there is a lot of pressure from fans to keep up that performance? If you were to fall off, do you think there would be some backlash?

Xyp9x: Of course there is pressure from some fans. I think right now, everyone expects us to win this tournament. Maybe some expect Na’Vi to win, or at least to put up a good fight. But it’s just about listening to yourself and also seeing how the team is working and how the team dynamics [are going]. Obviously it is great when fans are cheering for you and there is a good side to it, but you shouldn’t feel pressured by fans to perform. If you feel the pressure, then you won’t perform.

This might be a stretch, but has the team thought about having a rematch against Na`Vi in the final?

You keep playing Liquid in tournaments. Why is it that you consistently beat them, or what do you have to say about the fact that you always seem to match up against them?

Xyp9x: I think we play them at almost every tournament and it is almost always a close matchup every time. I think we win 16-14 on most maps or something like that. I think it’s just a good match, especially for the fans, with a lot of excitement. I do not know why we meet them every time. I guess it is just luck, or bad luck… But yeah I think they are a great team, and we always have close Mirage games against them.

Xyp9x, right now you have a 0.98 HLTV 2.0 rating at ELEAGUE. Was it just you playing two matches that did not go your way, or are you just not comfortable with the way you have been playing?

Dev1ce, you have the highest rating so far in the entire event. So what exactly is factoring into that? Is it you playing confidently or you just having good days?

Dev1ce: I have not thought too much about it. I think it is hard to measure if a player is doing really well or really poorly. There is also stuff in between that is hard to measure in some way. Yeah obviously I am having a really great tournament. I’d say that the preparation is always good against any team. I am pretty sure that I have a pretty good rating against Cloud9 and Liquid overall. So those have been some good match ups for me, playing against [Nick “nitr0” Canellas] and [Tyler “skadoodle” Latham]. They are two AWPers that I like to face, so to [speak]. I have been in the zone, and I am looking forward to continuing that way.

You are really well known for your utility usage and for being able to do damage without the enemy seeing you. How have you been practicing this, and why has this been so effective for the team as whole?

Xyp9x: It was a part of [Danny “zonic” Sorensen’s] plan from the start. We just did it in practice at some point, and we we started playing like, “why don’t we do this more often or why don’t we focus on this?” I think it stems from zonic, and we just saw it working in a match. Casters were speaking about it, So now we try to do it as much as possible. But it also comes with a risk, if you think too much about it and if your whole game is focused too much on it, then you will not focus on setups or other things like, so you have to be careful about that. But it is definitely something we have been focusing on.

It’s no surprise to see other teams copying you in the meta. How do you intend to shift the meta to be more in your favor?

Xyp9x: I think for us, setting a new meta, we kind of need to not be the number one team. Because if you’re the number one team you really can’t change much in between tournaments because everyone will know what you’re changing. It is really hard to change the meta when you’re the number one team. You mostly see it from the up-and-coming teams like MIBR or Mousesports. Maybe we can do it after the break if we put in a lot of work and a lot time into it and also come up with a whole new thing, but I do not know if that is the right way to do it. We will see in Stockholm and at the Major.

How has skipping events helped your performance?

Dev1ce: I’ve always wondered [others] could go directly from event to event and expect different results. You are coming with the same package. You’re coming [with] your energy levels really low, so I’ve always wondered what the thought process of some of the other teams were when they were going from event to event. Really, I do not understand the point in that, even though there is money up for grabs, but the chance to win is kind of low if you are not doing anything new. It seems kind of a silly move, from my perspective. [For] our team, it helps us revitalize our energy levels, seeing our families, practicing in-game, doing new stuff, and making adjustments from tournament to tournament that we can’t make if we are constantly on the road. Personally, I’m struggled a lot with stress-related stomach diseases, which I can’t help a lot, and not going from event to event [has helped me a lot with] not having side effects. It has helped us a whole to be better as a team and to also have that energy when you [need] it.

You will have to compete in the New Challengers Stage of the FACEIT London Major. What is your opinion on the teams you will face?

Xyp9x: I think being in the Challenger Stage is a new thing for device, dupreeh and myself, so I think it’s a new level of pressure we will be getting because we will be thinking, “What if we do not make it?” We have always made it to the Major stage. It’s really about [not putting] pressure [on ourselves], and we’ll go through. If we start thinking about not going through and the consequences, then it’ll be harder. It will be exciting. There are many great teams there, and I am looking forward to it.