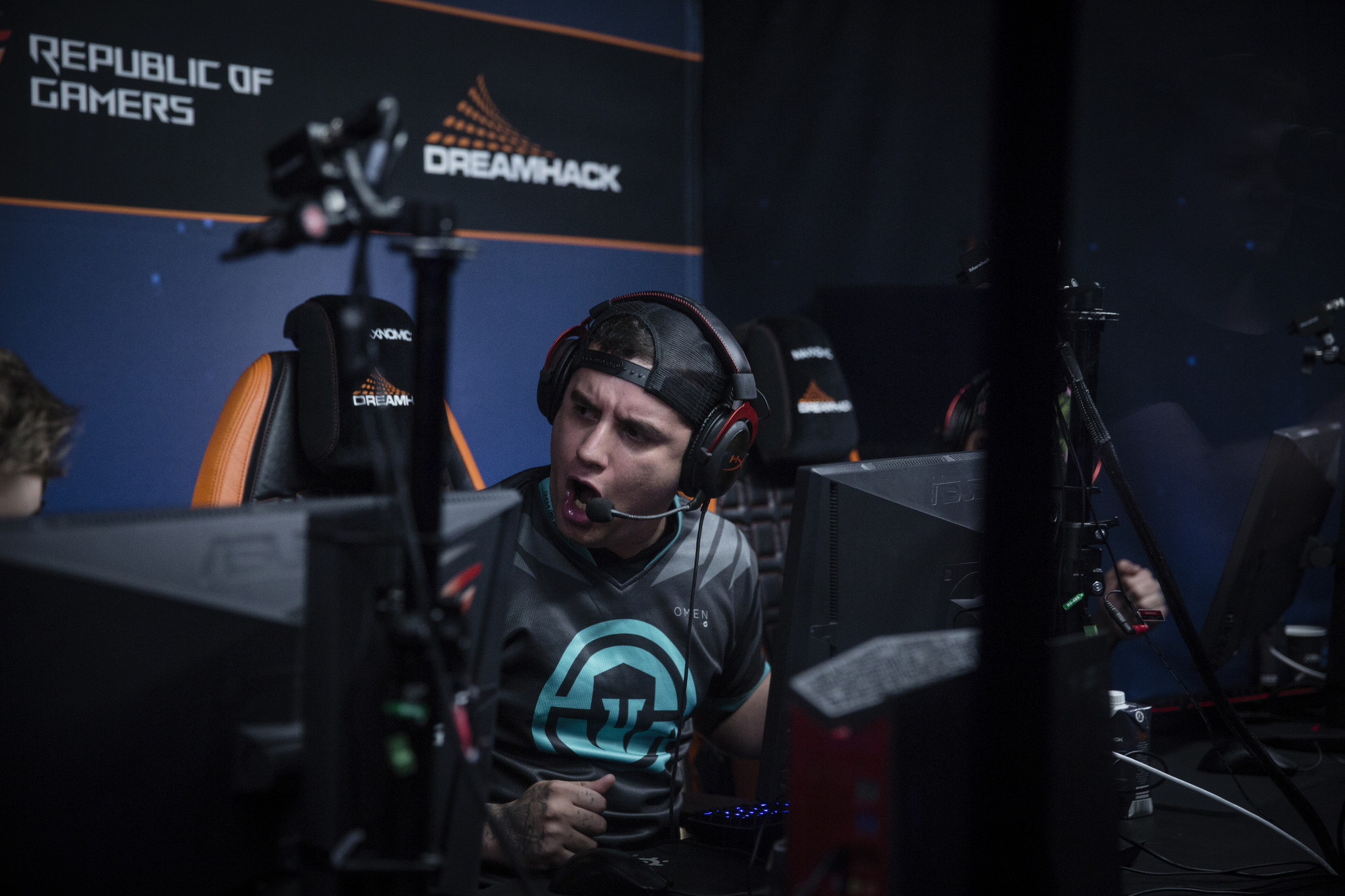 In the eyes of the wider CS:GO community, no region simultaneously holds as much mystery and scene-altering talent as Brazil. With Gabriel “FalleN” Toledo as its championship-hunting figurehead, Brazil has consistently produced world-class talent from seemingly innocuous backgrounds. Even the most hardcore Western analysts and well-researched professional players don’t necessarily notice what the enclosed Brazilian ecosystem sees within itself.

Over the last year, the international rise of Immortals has also been met with the introduction of sides like WinOut.net (now Luminosity) and Pain Gaming (now Tempo Storm) into the NA space. This creeping growth of Brazilian talent into more known regions has seen the paradigm of Brazil shift away from its mysterious roots. But that’s not to say that the Brazilian CS:GO space isn’t capable of cultivating seemingly left-of-field talent into world beating stars quickly and without the international press coverage.

Their domestic space has a solid tournament circuit to provide LAN experience, many seasoned veteran players actively playing and teaching young talents, and, importantly, clearly defined pathways to international play. There is certainly infrastructure and opportunity for burgeoning Brazilian stars to slip unnoticed by the wider community one day and deliver impactful performances on massive stages the next. In this sense, it should come as no surprise just how immediately jaw-dropping Immortals’ newest player addition, Vito “kNg” Giuseppe, has been for the side.

Throughout 2016 and 2017, kNg has been a dominant, staple primary AWPer for top teams domestically in Brazil and abroad with Red Reserve. Despite his rumored temper, kNg was one of the most sought-after prospects in Brazil. But kNg’s addition to Immortals in May was still met with scepticism—and justifiably so. In a positional sense, kNg was running directly against Immortals long-time primary AWPer, Henrique “HEN1” Teles, when vying for the sniper in-game. This clash of roles was even more problematic given Immortals’ infamous tendency to ride their economy hard, force buying regularly and hazardously—limiting the potential for double AWP setups. On top of this, he would be more-or-less directly replacing the legendary Lincoln “fnx” Lau and his crucial role as second/third entry into bombsites on T-side. For a player as untested internationally as kNg, this laundry list of requirements and potential issues raised more eyebrows than praise.

Yet here we are, four months later—and although Immortals are still riddled with many of the same problems as before, kNg has been a revelation.

Generally, when a potential domestic star gets the chance to play on a professional team, we see them try to align their skillset with the vision and needs of the team and the leader or coach. When Egor “flamie” Vasilyev joined Na`Vi as the CIS region’s “next big thing,” he worked tirelessly with coach Sergey “starix” Ischuk to become molded into Na`Vi’s system. Flamie channeled his skillset into the overall playing philosophy of the side—playing positions suited to what the team needed first. KNg and his style have seemingly gone the other way in this sense.

Since joining Immortals, kNg has served more to define his team’s loose and explosive, yet default-heavy style than any other player on the active roster. While HEN1 has always been the poster-boy of Immortals’ flashy highlight clips, his presence is usually felt later in the round, winning clutches and shutting down post-plants. KNg, on the other-hand, is actually changing the dynamic of how Immortals approach both halves.

On T-side, kNg’s ability to play off of Lucas “LUCAS1” Teles’ entry-fragging is the consistent key to Immortals’ success. This win condition is especially important against more disciplined, elite teams who aren’t lulled into their slower default rounds. On maps like Inferno and Overpass —where T’s are given more room to take early map control then explode onto a site—kNg and LUCAS1 communicate information to each other almost instantly and use flash timings to the millisecond. This symbiosis is crucial to defining Immortals’ gun rounds where the double AWP isn’t an option and their utility is light—which given their devil-may-care economic approach, happens often. Importantly, kNg’s rifling on T-side has been one of the most surprising elements of his game, out-dueling elite European site anchors despite his AWPing roots.

KNg is actually the driving force as the consistent second-entry, occasionally even with the AWP. This is in contrast to fnx, who would often be positioned to win a clutch scenario post-plant or occasionally cut off rotations on Immortals’ T-side. Teammate Lucas “steel” Lopes also played with kNg on g3x back in late-2016 as their entry-fragger, allowing Immortals to seamlessly change T-side roles up on the fly.

This isn’t even mentioning kNg’s simply ridiculous AWPing style, which centers around his insanely quick reaction time and consistent ability to hit shots at mid-range, regardless of his positioning. KNg’s sheer confidence—especially when repeeking enemies—sees him take the AWP into scenarios most sides would never expect, which facilitates some of the most surprising and explosive picks and early-round gimmicks in the world.

KNg’s affinity for playmaking and volatile peeks is a part of Immortals’ core philosophy. “In theory, hen1 is still the main AWPer, but there is no secondary AWPer on our team, [everyone] plays whatever they want, if they feel confident,” steel said in an interview with HLTV. This allows kNg to use the full array of his skillset in the manner he chooses without having to work within a confined system—a rare luxury for a player so seasoned domestically, yet untapped internationally. KNg’s use and exploitation of this freedom is better seen on the CT side, where aggressive individual playmaking is often heavily frowned upon.

Again, often working with LUCAS1 on sites and playing off of each other, kNg is well known for pushing the limits of his AWPing. He’s often found hunting for early round picks with the sniper, regardless of latent risk, and repeeking angles to push an advantage. This can be seen on Mirage and Cobblestone, where both kNg and LUCAS1 will play strange off-angles and close setups in the face of a full execute, or look for picks during uncommon utility timings.

That’s not to say he’s perfect, or this defined style is perfect, though. One of the reasons we see Immortals so sporadically dominant in best-of-one matches in one tournament then get easily beaten by the methodical executes of a side like North the next is because of how reliant they are on form. Forcing constantly and banking on limited strategies can only go unpunished when the skill is there to support it. So while kNg’s impressive AWPing and rifling antics will continue to yield Immortals an impressive array of European scalps in the short-term, the long-term consistency remains to be seen.

Before playing for Immortals or g3x, kNg was an unbelievably consistent player, but not necessarily in the same flashy way we see today. This is a credit to the rest of Immortals—especially coach Rafael “zakk” Fernandes and in-game leader Ricardo “boltz” Prass—for seeing kNg’s talent and giving him the correct platform to express it, despite the inherent pitfalls such a freedom-centered style can have. But getting over the mind-numbing choices Immortals often make on both a macro and economic sense, this freedom allows kNg to define Immortals and demand our memory of the side he’s guiding. Regardless of what array of issues might lie outside the game in regards to attitude, commitment, and inner-team respect, in the game, kNg’s mastering hand is undeniable—for better or for worse.