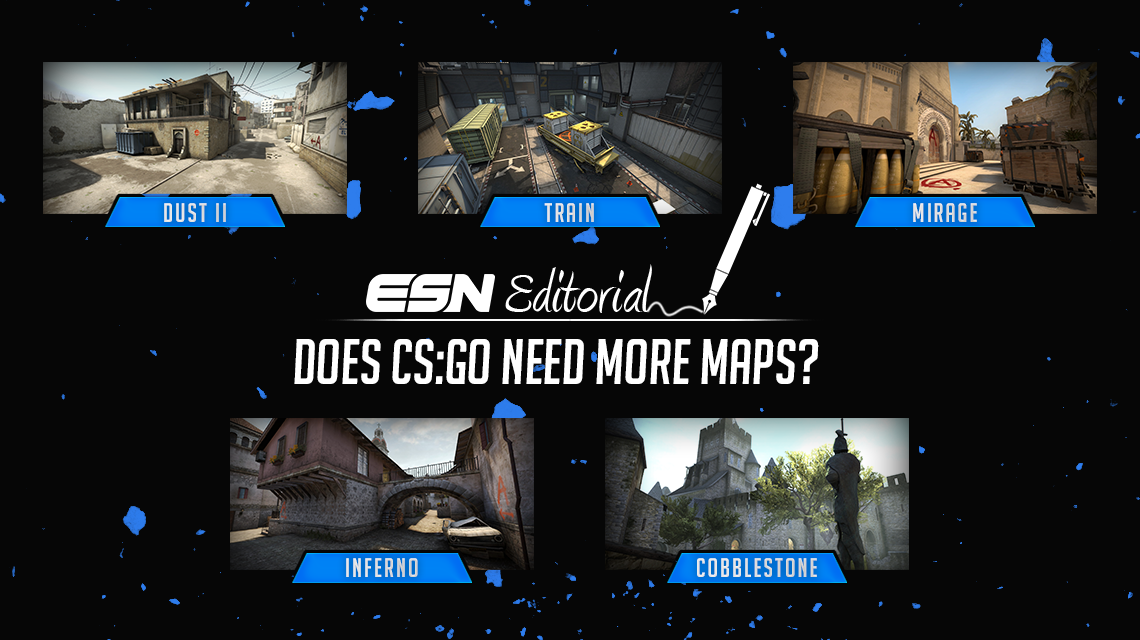 I see this all the time from people outside the realm of CS:GO : ‘You play the same maps’, ‘Same game for 10 years’, ‘All you play is Dust 2’. But is this really the case? The current competitive map pool has seven maps, which are:

All these maps have given us memorable matches. Overpass, for example, is famous for its massive amount of boosts, such as the two new triple boosts shown by Natus Vincere at the recent IEM: Katowice tournament and, of course, the boostmeister himself Olofmeister .

To see the iconic boost I am talking about that helped make a 13-2 comeback, click here .

However, these maps have seen multiple face-lifts and re-works. Dust, Train, Inferno, and Cobblestone have been featured maps in the game since 1.6 and before. Now I am not saying I want to replace any of these maps, nor am I saying I dislike them, but I saw something on Twitter that got me thinking.

de_santorini has been one of the more favoured maps from the recent  operation (Operation Wildfire). Having played it myself, I feel this map has a lot of potential with great lines of sight, and fairly balanced Terrorist and Counter Terrorist sides, which gives this map a fresh and exciting feel.

Now it is only a show match, however the question at hand is could a new map be added to the existing map pool? And if so, what effect would it have?

Duncan ‘ Thorin ’ Shields mentioned in his video , “Thorin’s Thoughts – FNATIC’s Broken Kingdom (CS:GO)”, that Fnatic ’s current map pool when it comes to bans and picks has almost no bad maps. He states that six out of the seven maps have a positive win to loss ratio, which is just insane. I recommend watching the video for the full breakdown on all the stats.

I reached out the Fnatic’s coach Viktor “ vuggo ” Jendeby about his thoughts on a change to the map pool, he said: ‘ It forces teams to be creative, it gives more value for Viewers to see new and fun stuff and overall keeps the game alive. ’ When I asked him what effect it would have on his team, he told me: ‘We love the tactical and creative challenge it creates and enjoys playing new maps .’

So, if a new map was added, for example de_Santorini, would this give some lower-tier teams a chance to catch the big guns off guard and maybe allow the more tactical teams to shine? Maybe, however adding a new map so close to the major could possibly be detrimental as I’d imagine teams would try and avoid it at all costs, but this doesn’t mean that it wouldn’t be fun to watch if it came up during a tournament.

I spoke to the in-game leader for Astralis’ Finn “ karrigan ” Andersen if he thought more maps should be added to the map pool, his response was: ‘ I don’t think CS:GO needs a wider map pool, but if you would want to add another map, they should take one out to redo and renew it, just like they did before .’ Karrigan mentioned that it takes a long time to learn the conventions of a map and establish a meta especially if no-one has ever played it before.

The next question is, if a new map was to be added, what about the new Nuke? Now if you have the graphics card to play it, (which I do not) the new lick of paint and tweaks to the map itself offer a whole host of new possibilities while still being familiar to those who played back when it was in the map pool.

If a new map was to be added, karrigan would be in favour: ‘ I would have to look into nuke’ he said  ‘I used to like nuke and had nothing against it. That map is more CT sided than other maps in the pool, for me that only leaves more interesting games.’

Another person I got in contact with was analyst Alex “ The Machine ” Richardson, who stressed that ‘ Seven well recognised, well strategised maps ’ was important, however on the other hand, he made a crucial point that ‘it’s highly unlikely these changes will happen without valve stepping in and saying right screw inferno/cobble we’re playing nuke/season now’

I personally agree and so does karrigan to a certain extent: ‘ I would welcome a new map, but it would have to be in a period where “no ongoing tournaments “’

I would like to thank everyone for throwing their hat in ring to talk about this subject and it brought up some interesting points such as the amount of time needed to practice a map and when it would best to add one into the map pool. Either way it is highly unlikely a move would be made without Valve making a push for it.

I do not think a change is needed but these maps could be a good choice if new ones were being discussed. What do you guys think of the new de_nuke and de_santorini and would you like them to be put into the competitive map pool? Let me know in the comments below or by tweeting myself @esn_tnm . For the very best in competitive coverage and thought provoking articles, make sure to follow us on Twitter for updates. @eSportsNation