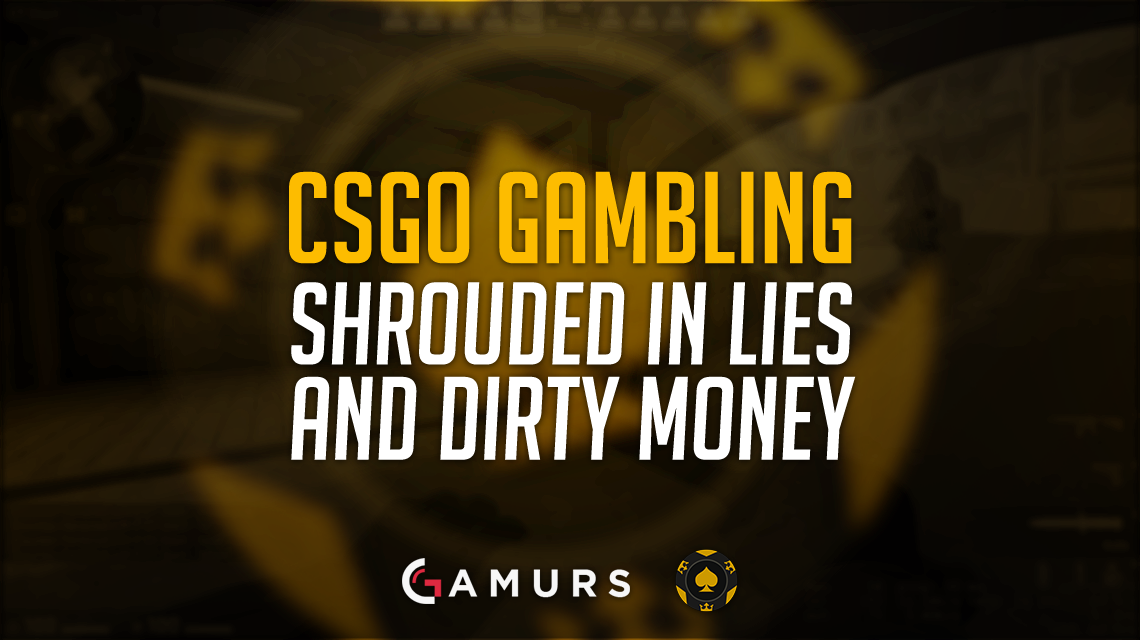 This article is a collaborative effort by Matthew “Bleda” Zerwic and Shelbi “shelbijhayes” Hayes. All information has been gathered from the recent exposure of various Counter-Strike: Global Offensive gambling websites and translated logs were courtesy of Sam “lolbanelor” Davies and Richard “RLewis” Lewis.

The Counter-Strike: Global Offensive gambling scandals have attracted the attention of many, even those outside of the CS:GO scene. Ever since Trevor “TmarTn” Martin and Tom “Syndicate” Cassel were outed by HonorTheCall for owning CS:GO Lotto, there has been a domino effect as more websites and gaming personalities have become subject to scrutiny.

Through the last month, business records, hacked Skype logs, Twitter direct messages, and other incriminating evidence has spawned. The problem has blown up so much that Valve Corporation is finally stepping in, no doubt due to the lawsuits brought against the development company claiming that Valve knew that these websites existed and broke the terms of service.

This isn’t merely just another scandal in the gaming world, but it has become a problem for those outside of it. Parents are now concerned that their children are gambling and this controversy will most likely have to bring in lawmakers to attempt to mend this epidemic.

Many of these people of interest have stepped away from social media, which is probably a good call by them and their lawyers, but that doesn’t mean the public will just stop talking about it. Another note is that one streamer, James “PhantomL0rd” Varga, had his Twitch account removed due to a terms of service violation.

As we learn about the wrongdoings of the people behind the recently shut-down gambling websites, it is important to remember that the amount of money skins brought in is enormous; about $2.3 billion, and gambling was a huge part of it. One website in particular, CS:GO Shuffle, was bringing in between $800 and $5,100 an hour, or $19,200 and $122,400 in a single day.

They knew what they were doing.

It isn’t like these companies were blind to the fact that minors frequently visited and gambled through their respective websites either. Through deeper investigation, in a series that lifted the veil of CS:GO Shuffle, Richard “RLewis” Lewis and Sam “lolbanelor” Davies broke the news of Twitch streaming personality James “PhantomL0rd” Varga’s true role in CS:GO Shuffle. In an ongoing series on Lewis’ YouTube channel, the two bring evidence in the form of Skype chat logs that heavily implicates that PhantomL0rd not only owned the website, but knew exactly that what they were doing was illegal.

In this log, PhantomL0rd notes that if they were to use services provided by their banks, they would likely encounter problems with such law-abiding businesses. Similar to how Prohibition Era mobsters couldn’t use banks to store and transfer money, PhantomL0rd and Joris realized that they must find other ways to convey their profits.

The bigger picture behind Joris saying that the contracts would have no legal value is that they would not be able to take someone to court for the breach of contract because their business is illegal. One cannot call a partner in crime dirty if they themselves are covered in it; otherwise, they would end up like Mohamad “m0E” Assad.

In this log, PhantomL0rd reveals that their website is hosted in the United States. There were no loopholes of going to an island nation to incorporate. They broke multiple laws and are flipping the government off in the process.

That may sound cool when talking about rebellious youth icons, like what PhantomL0rd appeared to be, but no one is interested when talking about adults breaking open the piggy banks of children, which PhantomL0rd actually did. The rest of this conversation was quite long and discussed tactics to still profit off of UK users. They talked about methods that would still allow users access to gamble, but they noted that such prevention systems were very easily bypassed.

While the lack of Federal Trade Commission and Valve terms of service compliances are to be noted, what is more disturbing is the lack of concern about minors using these gambling sites. The only problem the people involved with these websites seem to have with that notion is the smaller bets that come from minors.

In the United States, the majority of states require someone to be at least 18 years old to gamble with the exception of some states requiring gamblers to be 21 or states that allow minors to bet with parental/guardian supervision. But in skin gambling, it is more likely to be done without parents/guardians even knowing who is taking their children’s money.

These website owners did not disclose that videos were sponsored by their websites or that the websites are even owned by these streamers and YouTubers. On top of that, these owners have been rigging bets through back-end coding to win bets over others and stealing from not only adults, but also children.

One of the biggest things to come out of these developing storylines is the involvement of legal persecution. There have been two notable lawsuits: one against Valve Corp. and another against TmarTn and Syndicate.

In the class action lawsuit solely against Valve, Michael John McLeod, on the behalf of others, claims that the game development company knew about the skin gambling websites and did nothing, even though they broke the terms of service agreements and, therefore, encourage gambling, especially underage. Valve is also involved in another class action lawsuit that also involves CS:GO Lotto, TmarTn and Syndicate that is headed by a Floridian mother for her son and others concerned.

In logs involving CS:GO Shuffle employees, cAre’s only concern was that one of the streamers the website sponsored had a large audience of kids and that they would only bring in small bets. He was not bothered that minors are betting (without parental supervision) in the first place, which is illegal in all states and many countries.

These website owners and higher-ups do not even care. It is absolutely deplorable that the amount of money coming in is all these people care about and it makes us question if the money brought in the corrupt or if the money corrupted these individuals.

Another bone to pick with this is that these CS:GO gambling websites do not properly state that gambling is only for those of legal gambling age. Once again, this is another piece of information that isn’t properly disclosed.

The majority of the time, there is just a yes or no box that asks if you are of legal age. These websites require no age verification, unlike online poker and casino-style game sites that require I.D. verification for age and residence.

They broke the law and terms of service of multiple companies for sustained periods of time. They knowingly broke laws that were meant to protect the innocent. They went against the spirit of the law with the whole concept of skins gambling as they are easily converted to money, much like a poker chip at a casino.

Those involved allowed children easy access to gambling and targeted them through the promotion of their website on streams. Notably TmarTn, but also PhantomL0rd, cAre, and others, hid their involvement in their gambling ventures, which is a violation of US FTC codes.

Unfortunately, it is not as simple as outing PhantomL0rd and the rest of the people behind CS:GO Shuffle. There was a full-scale conspiracy targeting gamers, especially the younger ones amongst us. Only a few people who were involved have been revealed; the bulk of the people behind the skin gambling industry remain in the shadows.

A song by Metallica for which PhantomL0rd’s name is derived perfectly describes the controlling, cult-like, vain streamer and those like him who will return. This scandal is not the end to all schemes in esports, and this scandal is most likely not the end of PhantomL0rd.

Though skin gambling has been shut down, they will go from this scam to another and when that becomes a scandal, only a few will be outed. Also, this won’t be the last time we hear from PhantomL0rd. He will return, as others have, and all will be forgotten, but PhantomL0rd and others like him will not have forgotten their schemes.