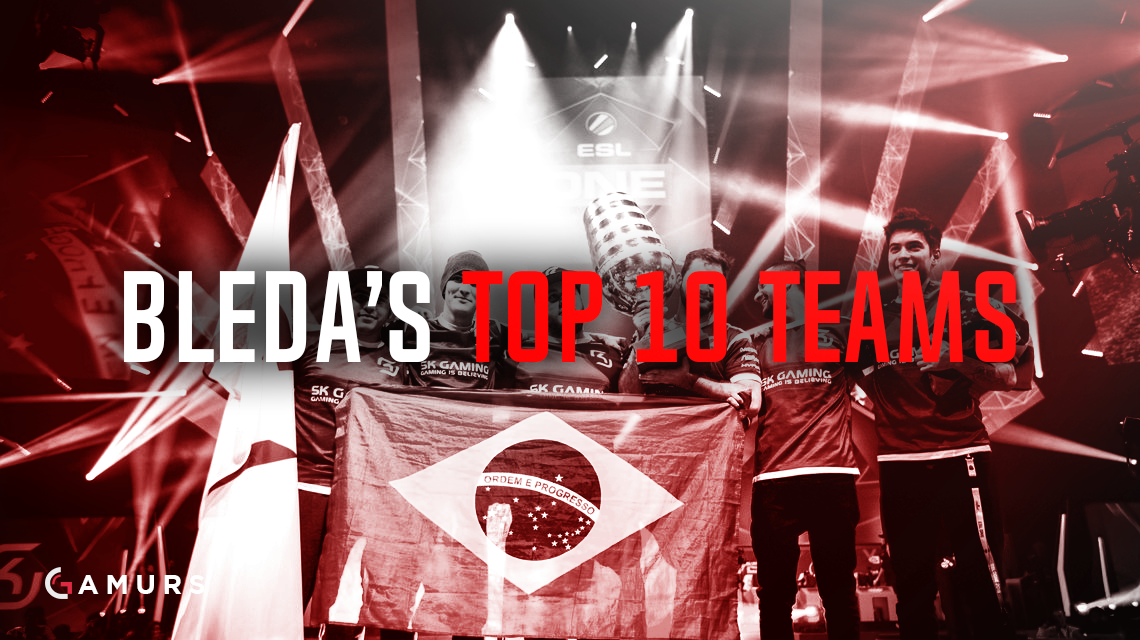 Every month or so, fans graciously lap up Thorin’s Top 10 list. His rankings have provided a stable, LAN based, ranking of the best teams. Personally, I always check his rankings and use them as a point of reference to inform where I rank teams in my mind. I even referenced his rankings this year to create this list. Since Thorin is probably not going to produce such a list and that there is value in diverse opinions, I have decided to create my top 10 of 2016 list.

Some people may argue whether or not this is SK’s era, but everyone can agree on the fact that they were the most dominant team in 2016. Their two major titles would be enough to justify a high placing on this list, but there is so much more to why this team was so good. They have incredible individuals that are pulled together by the best in-game leader of 2016. Besides Gabriel “FalleN” Toledo’s leadership, they have natural synergy together, which is why they have such good teamplay.

SK Gaming and Luminosity made it to 12 finals in 2016, more than any other team. They made it to 12 finals, despite taking a break when Fernando “fer” Alvarenga had ear surgery. They weren’t on the level of the virtually uncontested Fnatic and Ninjas in Pyjamas, but they stood above the rest of the teams in 2016.

Na’Vi has gone through some tough times. They had brief periods of very bad results, which were made worse by the extended breaks that they took, like their month long break after bombing out of Starladder. Starladder was their tournament to win; the Ukrainian event. Na’Vi is almost always in the finals of Starladder events, and in September, they went out in last place, which was absolutely unheard of.

This erratic behavior was complemented by spectacular tournament wins, like ESL One New York. If Ladislav “GuardiaN” Kovács was in the peak form we were accustomed to seeing, then it would be a very different story. Na’Vi would be consistently winning tournaments. Without that reliable and incredible skill, however, Na’Vi wins and loses on whether or not enough of their players show up at the same time. With the coaching restriction and the difficult assimilation of Alexander “s1mple” Kostyliev, playing well in tournaments was a crapshoot when he could always be counted on in the past.

With Daniil “Zeus” Teslenko, Na’Vi had greater stability and teamplay, but his skills were lacking. Thinking that Sergey “starix” Ischuk would be coaching them, Na’Vi picked up s1mple. The Ukrainian powerhouse started out very well, kept up good results despite GuardiaN’s injury, and after trying to gain an upperhand by recruiting the best Ukrainian player, Na’Vi ended the year on a bad note. They make it in the top-two on this list, primarily for their first half of the year.

Virtus.pro delivers time and time again. They also never fail to deliver when it comes to disappointing fans. They are either doing terribly, like at the beginning of the year, or they are doing too well, as seen in the last half of 2016. They might fail in the group stages or get relegated based off online games, but they always deliver in the big moment. After playing for so long, it seems as though the pressure is the only thing that drives them anymore.

When talking about Virtus.pro, Janusz “Snax” Pogorzelski must be brought up. Sure, there is Jarosław “pasha” Jarząbkowski and his biceps, Filip “NEO” Kubski and his 1.6 history, and Wiktor “TaZ” Wojtas, the spokesman for the team, but Snax is the guy who consistently delivers. Not only does he deliver, but his play is unpredictable. So many times has he pulled VP back from the brink to win the game. Virtus.pro is the gatekeeper for the best team in the world. Since they guarded that ranking so well this year, they definitely earn a spot this high.

Many may feel that Astralis is too low on this list, but the whole year must be taken into account when doing this kind of ranking; not just the last two events of the year nor an event that happened in 2017. At the beginning, Astralis was looking pretty good. They were right up there with Na’Vi and Luminosity, looking to break Fnatic’s streak, but there were obviously a few rough patches. Astralis was unable to fully capitalize on the Kjaerbye pickup, and Finn “karrigan” Andersen’s departure left a hole in the team for a while. It was only at the end of the year that Astralis was able to revitalize and become a true first place contender.

At the beginning of the year, their results were much like Luminosity’s. They were very good, but they would always come in second place to Fnatic or Na’Vi. Instead of moving up to number two in the world, at the time, Astralis’ results took a downturn for seemingly no reason at all. Astralis wasn’t dreadful, but they were just managing to make it to playoffs of tournaments. Their results showed a massive jump from their seven month period of uninspired mediocrity in November starting with IEM Oakland. And at the final tournaments of the year, Astralis showed a spectacular new level, the likes of which we haven’t seen before from them with any degree of consistency.

Dignitas, now called North, had great difficulty when it came to starting out the year. Stars were taken out of the team and supplanted onto better teams with higher salaries. Mathias “MSL” Lauridsen had groomed both Philip “aizy” Lauridsen and Markus “Kjaerbye” Kjærbye for the success that they now have today. This time around, MSL took Emil “Magiskb0y” Reif, and turned him into a better player. With supporting stars, like Rene “cajunb” Borg and Kristian “k0nfig” Wienecke, the team was able to enter a place where they could contest highly ranked teams at the time. They improved their teamplay and map pool, with pocket picks like Nuke, so that it was a must ban for teams like SK. After squeezing their way into contention for best team at the time in the second half of the year, Dignitas was able to cap their numerous quarterfinal and semifinal finishes with first place at EPICENTER.

Fnatic in 2016 has mostly been remembered for their results after Olof “olofmeister” Kajbjer injured his wrist and for the poor results of both Fnatic and GODSENT after the teams separated. I am one of the few who remembers them for ELEAGUE Season 1, the win streak at the beginning of the year, as well as the bad period. I think the main reason for people criticizing Fnatic throughout the majority of 2016 was that 2016 ended up being a kind of “live fast die hard” kind of year for them. Since their bad results were great in number, it is easiest to assign them with the status of being a bad team, despite those extremely good results during the first portion of the year. If we really think back to that part of the year, considering the whole year, not just recent months, there is no debate as to why Fnatic makes it on this list.

You can’t count on NiP most of the time, but you can count on them winning a few tournaments every year, no matter how bad they are doing or how good the opposition is. Ninjas in Pyjamas won IEM Oakland after having to face SK, DreamHack Masters Malmö after facing Virtus.pro and Na’Vi, and StarLadder i-League StarSeries Season 2 after facing G2. All of these were quite legitimate victories, and they had other very notable series and placements in tournaments too. The problem with NiP, like Fnatic, is that the whole picture must be examined. In the case of NiP, most of the year, they are poor. They have a few spectacular performances, and people go crazy, partially feeding off the lunacy of the old Ninjas in Pyjamas from early CS:GO. Since they had a few times this year where they delivered, magically or not, they earn themselves a spot on this list.

Why G2 and not nV? That shouldn’t even be a question. For most of the year, Kenny “kennyS” Schrub was playing horribly, even if it wasn’t his fault, Nathan “NBK” Schmidt had little impact, and Vincent “Happy” Schopenhauer’s style was completely ineffective. Alternatively, G2 was winning tournaments, was a legitimate threat to top tier competition, and had a good set of individual players who could prove it time and time again in the game. G2 and the rest of the French scene hasn’t done fantastically well this year, but they did well enough to warrant this spot on this list.

FaZe makes this list just below G2 only because G2 won events and made it into finals this year. Otherwise, FaZe would rank better. FaZe had a very rough start to the year, even after recruiting aizy, Fabien “kioshima” Fiey, and Aleksi “allu” Jalli. It was only until they recruited karrigan that they became a threatening team to the big dogs of the scene. Since that period was at the end of the year, giving them little time to show what they can produce, I am forced to put them here, because this is a ranking based on real results.

North American fanboys will probably prefer that I put OpTic or Cloud9 on this list. They probably think that the one NA team on this list deserves to be higher as well. I must disagree on that point. OpTic only had three events where they showed they’re world class, and C9 had proven themselves only at a few tournaments where the opposition was weaker. This leads into my next point as to why Liquid deserves to be the best NA team.

Team Liquid did have some very flukey results, which in turn discredit those results to some extent, but Team Liquid broke more barriers and more difficult barriers than any other team this year. Team Liquid has gone further than any other NA team in a major. At the time, Team Liquid got the furthest any NA team had in more than six months. Team Liquid’s successes were based on the backs of its players, not the lack of good plays from the other team. The biggest reason why OpTic and C9 don’t get a spot on this list, but Liquid does, is because Liquid proved themselves over a larger span of time, despite their highest level being lower than the other two.