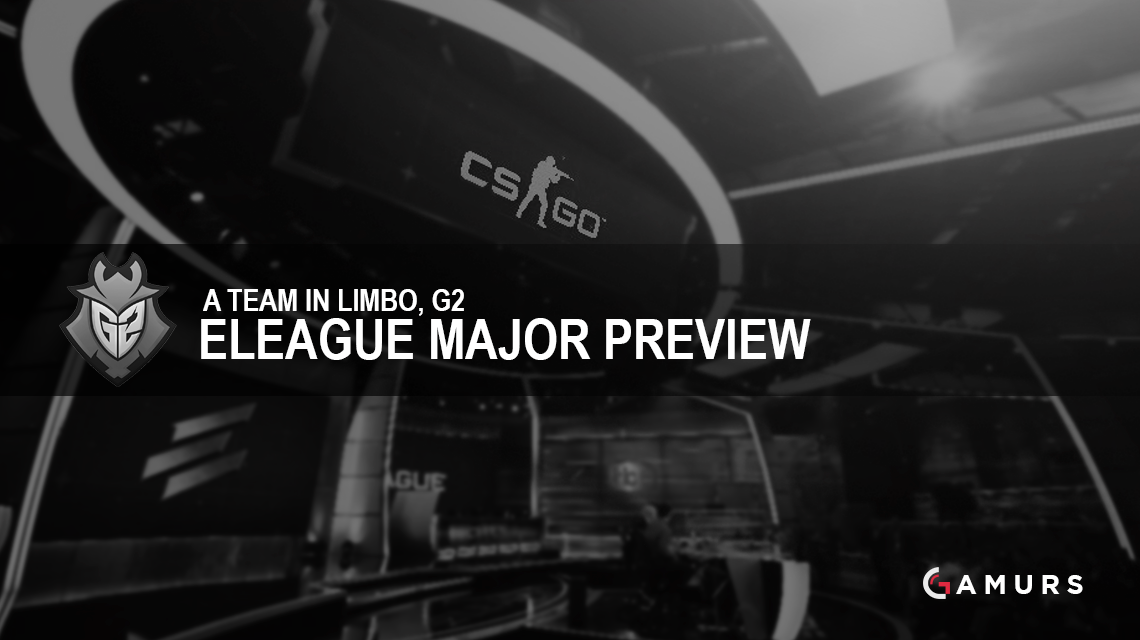 You know your team has problems when everyone is talking about your next lineup. G2 Esports has only been able to produce a few isolated glimmers of brilliance in the year that they have competed. What’s more, G2 and its predecessors have always failed at the majors. I can tell you right now, G2 is not going to be winning this thing, but even making it to the quarterfinals holds great importance. So G2 cannot be dismissed so quickly out of hand and requires further investigation and thought.

Right out of the gates, G2 will being playing Fnatic. With this lineup, Fnatic has yet to prove much of anything, but they have proven that they can demolish G2. At Dreamhack Masters Las Vegas Qualifier, G2 faced Fnatic and lost 2-0 in a best-of-three. G2 failed to make double digits on both of the maps. G2 also was able to play their two most played maps, Cache and Dust II. G2 couldn’t have asked for a better scenario.

The other reason for picking G2 to lose to Fnatic in the first round is that they have had a mental block when playing against Fnatic in the past. At ESL One Cologne, G2 should have made it out of the groups for the first time at a major. They were so close, but they just lacked the clutch element. In a major, especially one that uses the Swiss format, every game counts, which makes every game feel like your lives are on the line. If a top team gets upset, they could be playing you next. Since this is a best-of-one “group stage,” the chances of upsets are even greater, as is pressure on G2.

Some teams rise to the occasion, and others fall. The bulk of these players were on VeryGames, the lineup that played at the first major, the tournament that was supposed to be their major. Everything was set for them to win, but they lost to the Swedish Ninjas, who often were able to dominate the French because of a mental block that VeryGames had.

There is little hope for the French this time against the Swedes in the form of Fnatic. They are playing against a set of players that are just as clutch as the Ninjas in Pyjamas. Olof “olofmeister” Kajbjer, Freddy “KRiMZ” Johansson, and Dennis “dennis” Edman have all proven themselves able to perform consistently at the highest level when their backs are against the wall. Because G2 is weighed down by players like Edouard “SmithZz” Debordieu, they are playing on the low-ground and therefore have little chance of winning. If they ever bring the game to the level that would have Fnatic scared, Fnatic will kick their game into gear and power through G2.

There isn’t only one example of G2 choking in high pressure games, though choke is not the right word for it. It’s not as though they played without their monitors, but rather, they don’t play to their usually high level. Since they aren’t playing terribly, some fans will believe they were just outmatched, but this would be a mistake, since something definitely went wrong on G2’s side of things.

At ESL Pro League Season 3 Finals, there were players on G2 that played at a phenomenal level, but they never had the cohesion to both maintain and facilitate more playmaking. Luminosity, their opponents, had both individually skilled players and a good unit, so they were able to step up and win the series after being down two maps to one.

At Starladder i-League Starseries Season 2, NiP was able to power through G2. A world class team would have been able to keep NiP from getting into the game, but enough players on G2 slipped yet again. G2’s final second place finish of the year was very disappointing. They had lost to OpTic, who wasn’t even a top NA team at the time. OpTic’s run of form at the very end of the year softens the blow to some extent, but the OpTic seen at ELEAGUE and FACEIT exceeds their showing at Northern Arena, where G2 lost to them in unconvincing fashion.

My prediction for G2 does not apply only against Fnatic; there are many other teams in attendance that could prove difficult for G2. Teams such as SK, OpTic, North, Astralis, and Virtus.pro have the odds stacked in their favor if G2 comes up against them. G2 shouldn’t have too hard of a time against FlipSid3, HellRaisers, mousesports, and Gambit. G2 also had the upperhand, domestically, versus EnVyUs, but that might be distorted due to the impending French shuffle. But, for G2’s other possible opponents, it’s a toss up of whether or not they can make it to the playoffs or beat G2.

G2, for the longest time, has been in limbo. They can make it to tournaments and go deep in some of them, but they have only won a single tournament in 2016. EnVyUs is in very much a similar position. The impending breakup of teams or departure of players has often lead to some very interesting performances in the past, and this tournament could lead to such an instance from Fnatic, Godsent, G2, and nV. The problem is that miraculous results cannot be counted on, especially if NiP magic doesn’t work against teams like Vega Squadron. Additionally, G2, as a team, has never shown the magical qualities that NiP has in order to win a game. Therefore, G2 is in a very precarious situation when it comes to making it out of the groups of this major.

Who do you have making it to playoffs? Let us know your thoughts in the comments below or tweet us @GAMURScom.