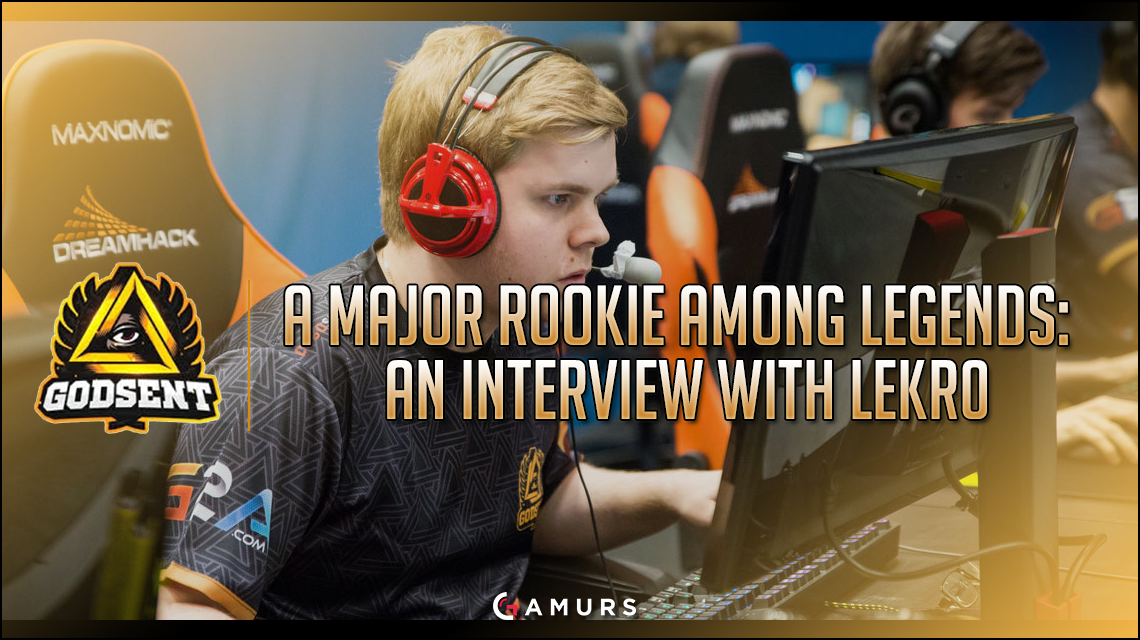 I had the pleasure of interviewing Jonas “Lekr0” Olofsson of GODSENT a day after they suffered a grueling loss to North, which eliminated GODSENT from the ELEAGUE Major. Him and I were in a very casual setting, so the flow of this interview becomes a lot more conversational in comparison to other interviews. We discussed overall performances amongst the team, his team’s map pool, and his opinion on the map Inferno. Lekr0 also concluded my interview with a brief cliffhanger.

Since this was your first ever Major, how do you think you performed individually for your teammates? Do you think you were beneficial? How would you rate yourself?

Lekr0: “I think I played pretty well for it being my first major. Stat-wise, it was good, but I think I also did well on my tactics, like not choking and playing like I normally do in my normal role. I think it went very well [for all of us].”

Do you think there are flaws in the Swiss format because you guys were unable to advance to the playoffs after such a tight elimination game against North?

Lekr0: “I don’t think there was anything to blame except for us of course. Because if you lose, it’s the team’s fault, it’s not the tournament’s format or anything. I like the Swiss format. We could’ve played better as CT in the first half. I think that pretty much made the difference that we lost both of the pistols.”

Lekr0: “I’m not really sure. I’ve only played with pronax as a true in-game leader. Before I played with GODSENT, it was lower level Counter-Strike and it wasn’t as professional. I think pronax’s calling is really good. Right now, it’s a bit stressful for him and for the team, so it affects his calling as well. Our game is a lot more structured than it was before.”

Do you think pronax’s play-calling has changed since he was on Fnatic?

Lekr0: “I think his calling is almost the same. The way “we” play as players individually is different under pronax. Usually, we do something crazy before he even gets to call something that he wants.”

One of the biggest wins you had was in your first game against Astralis. How much of a morale boost was that going into the rest of your matches throughout the week?

Lekr0: “The first match didn’t matter as much. We knew if we played Train that we were going to win. It’s not us being cocky or anything. I don’t think we’ve lost on Train; maybe one time maximum. We know it’s our best map and we don’t lose it. It was kind of expected as soon as we knew we’d play Train in the tournament.”

In terms of maps, I noticed that you banned Dust II, Cobblestone, and Nuke every time. Are there any problems you guys have on those maps that make you want to ban them?

Lekr0: “We don’t play [Nuke] because the team decided that we were going to leave one map out of the pool for this major. We thought we don’t have time to practice every one of them. We wanted to perfect at least five maps. Our Cobblestone is pretty bad. We usually have Nuke as our first ban. Dust II is okay for us to play, but we prefer to play anything else but Nuke and Cobblestone.”

Do you think there are any maps in particular that need to be reworked, such as Dust II or Mirage?

“I don’t really want any map to be reworked. I just HATE playing Dust II, so maybe it could be reworked because it’s boring. I think they [Valve] should add Inferno [to the map pool], for sure. I think it’s really bad they changed Inferno, and I liked how they way it was before.”

With the new Inferno, do you think there is anything big that’s wrong with it? At banana for example, teams can nade-stack it thirty seconds into the round. Do you think Valve can change anything around to make it feel more “competitive” in a sense?

Lekr0: “I like the previous Inferno. At banana, there were stone walls, and it was harder to take over (retake) B as a CT. Now, it’s going to be really slow-paced, and Terrorists are just going to wait on the slope (T ramp) for the nades. [The meta is] going to be a lot slower than before, and it’s going to be quite boring.”

Lekr0: “I think it’s definitely T-sided because you’re going to automatically force the CT’s back from banana whenever you want to. After thirty seconds, you can take over banana (and B) pretty quickly. As for apps (apartments), you can work it pretty fast with four people and have one guy hold slope (T-ramp).”

And last but not least, what does the future hold for GODSENT?

With the same team?

What do you think the future holds for Lekr0 and GODSENT? Tell us your thoughts below or with a tweet @GAMURScom