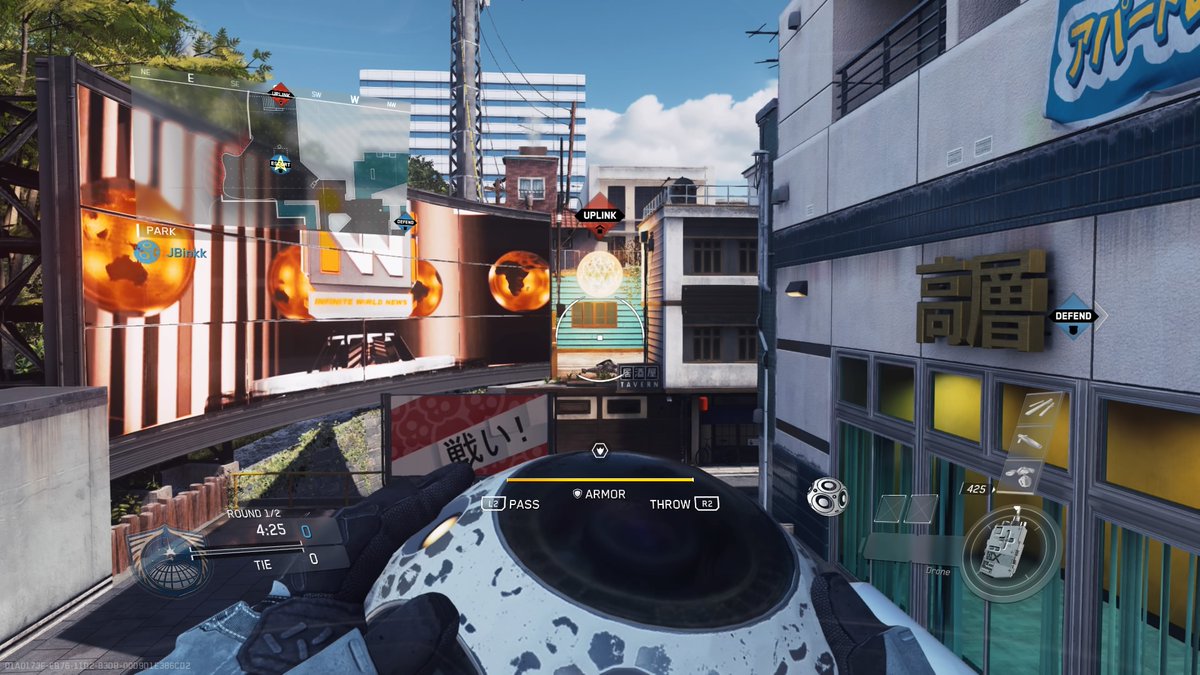 Sledgehammer Games revealed last week that it intends to make Uplink “thematically appropriate” for Call of Duty: WWII. But how exactly would Call of Duty’s fast-paced version of basketball work in a boots-on-the-ground game like WWII?

Uplink was first introduced to Call of Duty in November 2014 with the release of Advanced Warfare, and the game mode has been a staple in the competitive scene over the past three years. The object of the game is to either throw or dunk the neutral drone (or ball) into one of the two portals on opposite sides of the map—a throw is worth one point, while a dunk is two.

But one of the reasons why Uplink has been so successful is due to the advanced movement in-game, allowing players to wall run and jetpack around the maps to dunk the drone into the relatively high portals. In a boots-on-the-ground game like WWII, this wouldn’t be possible.

So what adaptations could Sledgehammer make in order to keep Uplink as a competitive game mode in WWII?

This seems a bit obvious, but without advanced movement or jetpacks, dunking shouldn’t be in WWII Uplink. Sledgehammer could technically lower the portals so players could dunk using a normal jump, but that would also make it way too easy to hit throws.

Thus, WWII Uplink would theoretically just consist of one-point throws—which could make the game even more competitive than it already is.

Currently, with specialist abilities, payloads, and advanced movement, it’s much easier to overcome a large deficit in Uplink. Without these mechanics, or two-point dunks, the game mode would punish more teams for their mistakes.

With one-point throws as the only method for scoring, slaying would become even more important than it already is. Uplink has greatly evolved as a game mode since it was first introduced, and most teams have started to realize that you can’t just run straight for the portal with the ball—you have to take out several players on the opposing team multiple times and methodically work your way across the map to give yourself the highest percentage scoring opportunity.

This would be especially true in a boots-on-the-ground game like WWII. Every point would be that much more important, and guaranteeing your team the best possible scoring opportunities would be essential for success in this game mode. And unlike other possible game modes, this potential version of Uplink would still feature a great balance between slaying and objective gameplay.

In past Call of Duty games, the alternatives to Uplink in the competitive scene have included Capture the Flag, Blitz, and Domination—and all three game modes have a few issues.

Although Uplink isn’t necessarily perfect, it’s much more fast-paced than Capture the Flag, which can feature stalemates if both teams have possession of the flags. These long periods of inactivity can get extremely boring for spectators, and the game mode can promote camping or very defensive gameplay.

While Blitz was an extremely fast-paced game mode, it was also very fluky and essentially rewarded players for just sprinting to the other team’s base as fast as possible. Besides, sliding into a portal and teleporting back to your own base is a very strange “objective.”

Finally, Domination has seen success in past competitive Call of Duty titles, but it just seems like that ship has sailed. Domination is a great public multiplayer game mode, but it could struggle to captivate an audience watching a competitive event—and most people who play the game mode online would agree that it’s become more focused around seeing who can get the most kills compared to actually playing the objective.

The professional players are constantly inventing new and unique ways to hit one-point throws, and that wouldn’t change in WWII. Although the players wouldn’t necessarily be able to jump high in the air or wall run on the side of a bunker to make a throw, they’d still find interesting and exciting ways to captivate fans with unique scoring angles.

The battle for map position would become even more important than it already is, especially because taking down all four opposing players would likely result in a spawn trap and at least one scoring opportunity. Teams would need to find a good balance between not making too many mistakes, and playing aggressive enough to apply pressure on their opponents.

If one-point throws were the only way to score points, teams would get punished for being overaggressive or overextending. The games between top teams would likely be very close, at least within a couple of points, making this potential version of Uplink even more exciting for spectators. Players would also enjoy a fast-paced game that still requires both slaying and objective gameplay. And who doesn’t like buzzer beaters?

It seems strange to think about Uplink without dunking, but at the same time, it also makes the most sense for a boots-on-the-ground version of the game mode. Teams would still play the same style of securing kills and throwing the drone down as they move throughout the map, but these great team pushes would just result in one point instead of two. Even with the theoretic concept of only having one-point throws, Uplink presents the best balance between slaying and objective work in a potential competitive game mode.

This is all speculative, however. Sledgehammer has given no indication as to its plans for Uplink in next year’s title, and these thoughts simply represent some potential ways that the game mode could work in WWII.

For all we know, Sledgehammer has an entirely different idea about what it wants to do with Uplink—these are just some opinions on what the developers could do to keep the popular game mode in WWII esports.