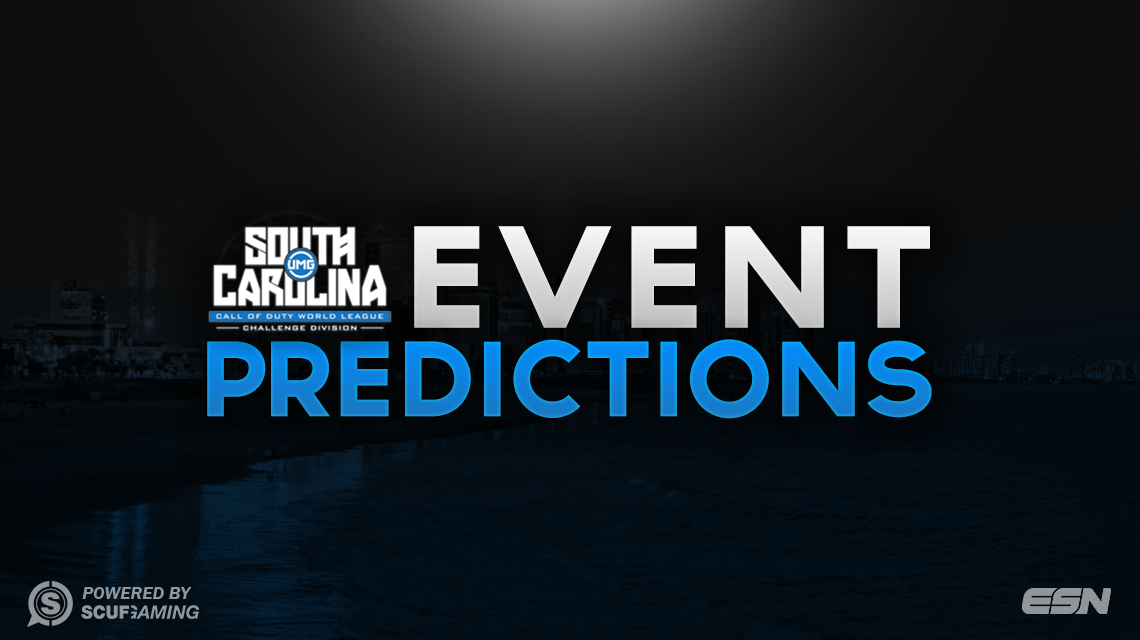 In this article, you will find eSportsNation’s predictions for UMG South Carolina (#UMGCarolina).

*Note that these are predictions and opinions from the ESN staff.

While this is not technically the first LAN event of competitive play for Call of Duty®: Black Ops III , UMG South Carolina is certainly one of the most highly anticipated. The Totino’s Invitational 2015 was a little too early in the game’s life for real competition, and the Call of Duty World League NA Pro Division Qualifying Invitational Tournament was simply for qualifying purposes, and teams never got to move out of the group stage.

Now, however, there is a double-elimination open bracket full of amateur teams fighting for the top four spots, which come with a prize pool of their own and the ability to join the 12 CWL teams in a single-elimination CWL Championship Tournament bracket fight for the grand prize.

Open bracket predictions are hard enough as it is, and with no official bracket released this is basically shooting in the dark, but we’ll try anyway.

*Note that these teams will receive the extra payment if they reach top-eight in the CWL Championship Tournament.

So the seeds going into this bracket are currently unknown, but these four teams appear to be the strongest when you glance at the field. Team Liquid is given the edge because of their time together as a team so far, and the veterans on their roster being led by an all-time great in Joey “ Merk ” Deluca. Cloud9 appear to be more stable than Enigma6 right now, and will look to impress in their first Call of Duty event in the organization’s history. Enigma6 looks to have a strong squad, but may not have enough practice together to really perform here. Velocity is interesting, if only because Steve “ Mochila ” Canle is proven to be a great Call of Duty player, but he has been playing more League of Legends lately than anything else.

Don’t expect this to be close. This Team EnVyUs squad is on a tear, and no one is going to stop them. Especially not an open bracket team.

This one could be close, but neither team is looking extremely impressive in the league so far. Team Kaliber should take it based on their veteran play, but it’s close to being a toss-up.

The guys on FaZe had a rough 0-2 week in the league, but this game should give them some confidence back. CLG shouldn’t provide much of a challenge considering they’ve had mere days to play with their new roster.

This compLexity team is ripping up the league right now, beating FaZe and OpTic Gaming in the past two weeks. Don’t expect Liquid to stand much of a chance here, as compLexity looks to fight their way back to the top of CoD eSports.

Once again, the open bracket team doesn’t seem too likely to do well in this match. Rise have proven time and time again that they are one of the best teams on Black Ops III, and should take this one.

Team SoloMid’s CWL debut was a bang, as they took down the powerhouse that is FaZe, but then they were defeated 3-0 the next day by CLG, the last place team in the league. H2k have been at the bottom of the table for a while, and don’t look to be moving up anytime soon. This is an odd match, but TSM should walk away victorious.

After losing their lead spot in the CWL just a few days ago, the boys on OpTic are probably a little annoyed with themselves. Enigma6 should look out, because everyone knows what OpTic CoD players can do when they play with purpose.

OpTic Gaming will be looking to fight for their hold of the top spot in North American Call of Duty, but Team EnVyUs will not go quietly. This final will be impressive and fun to watch, and since the CWL Championship Tournament is single-elimination, anything can happen.

Who do you expect to win the tournament? Is there a darkhorse you have in mind? Let us know in the comments below or on our Twitter @eSportsNation and be sure to check back for all the updates you need on eSports.