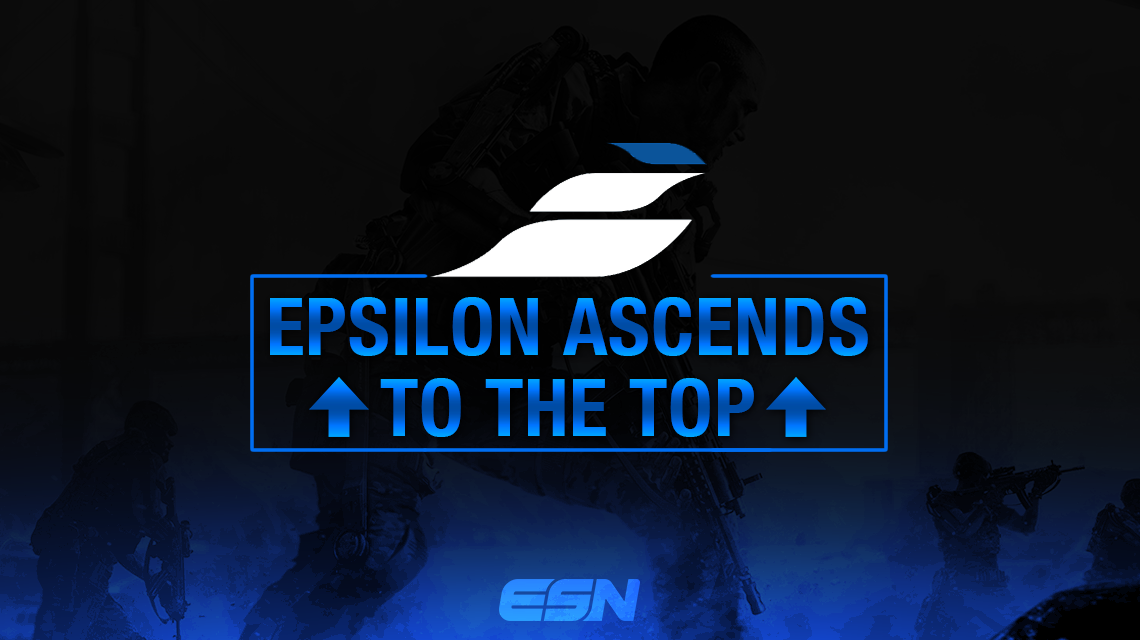 At the end of the recent MLG Pro League Season 3 Playoffs for Call of Duty®: Advanced Warfare , one team stood out above all the others, Epsilon eSports . Throughout the tournament this team consistently beat expectations and gave the top-tier teams a run for their money.

Start of the tournament

Coming into the tournament with the seventh seed and a league record of 5-6, this team consisting of Chris “ Parasite ” Duarte, Jared “ Nagafen ” Harrell, Remington “ Remy ” Ihringer, and Matthew “ Royalty ” Faithfull (no longer affiliated with Epsilon), was projected by many to lose in the first round against Denial eSports, and if anything squeeze into the top-eight within the Loser’s Bracket. Instead the team blew through the Winner’s Bracket all the way to the Winner’s Bracket final, only to narrowly lose in that match and the Loser’s Bracket final to finish third in the tournament. This improbable run could signal the beginnings of a new powerhouse team that can compete with the best.

The start of the tournament for Epsilon was undoubtedly their best moments. On the opening night, they beat strong opponent Denial eSports 4-2, to advance to the second round of the tournament. The team played fantastic in the two games with Royalty telling me after the match that, “(he) would call this an upset” and that, “the whole team wasn’t playing well at DC but they’re feeling good about this event.” Feeling good they were, as they went up against second seeded Team eLevate and won handily 4-1.

Epsilon was undoubtedly playing up to their full potential after their big win over eLevate and after the match, Royalty told me that they, “are playing great, and I’m excited for the rest of the tournament.” After an incredibly strong opening night, the only question left on the team is if they could repeat their opening success in the crucial next day. Saturday performances at events make or break teams, and two losses would have them only placing at eighth place.

The second day of the tournament for Epsilon eSports saw them pulling off a huge upset, followed by an incredibly close match in which they narrowly lost. To start off on Saturday, Epsilon had to play against the incredibly strong FaZe Clan , winner of several of the past events, in order to get to the Winner’s Bracket final. Before the match, Parasite said that, “If we play like we played yesterday, I think we can (pull the upset).” and added that he was excited to play James “ Clayster ” Eubanks, one of the top slayers in the game.

Epsilon went on to play almost exactly as they had the day before, consistently out-slaying and completely outperforming FaZe on their way to a 4-1 victory. Such a dominating performance against a perennial top contender, and second place finisher at the MLG Pro League Season 2 Playoffs , turned many heads and ensured Epsilon a top-three finish in the event. After the game Nagafen said, “I’ve been playing bad the past couple events but I came in her focused and wanting to do well,” adding that, “I think with how we’ve been playing we can take on whoever wins (the OpTic Gaming and Isolation Empire match in the Winner’s Bracket semi-final).”

OpTic Gaming, champions of UMG Washington D.C. 2015, ended up defeating iSolation eSports and were Epsilon’s opponent in the Winner’s Bracket final. The match started in OpTic’s favor with their prototypical Retreat – Hardpoint win before three straight map wins from Epsilon brought them one map win away from being in the grand final. OpTic though, seemed to have a will to survive and quickly won Solar – Search and Destroy 6-0, before winning Detroit – Uplink 7-4.  This left both teams even in map counts heading into the final map, Recovery – Search and Destroy. The S&D went to a final round 11, before OpTic managed to narrowly defeat Epsilon and move on to the Winner’s Bracket final.

The match was a major disappointment for Epsilon with them being so close to advancing to their first final in Advanced Warfare, yet losing their final three maps and being dropped down to the Loser’s Bracket final to play the winner of FaZe Clan vs. Team eLevate, two teams which they had previously beaten.

Heartbreaking end to the event

After the crushing loss to OpTic Gaming, Epsilon once again was set to play against FaZe Clan, who they had beaten earlier in the tournament. Epsilon showed all of their previous strength and went up to a 3-0 lead in map count, to once again be one map away from going to the grand finals. Unfortunately, in an almost exact repeat of the night before, they lost three straight maps, which included a 6-5 loss on Bio Lab – Search and Destroy, to get to a last map Riot – Search and Destroy, to determine who goes to the grand final and who places third. In a close game, Epsilon lost 6-3 to place third at the MLG Pro League Season 3 Playoffs.

It was by all accounts an excellent tournament for Epsilon in which they beat several top teams and showed that they were capable of placing high for the remainder of the game. The tournament also saw the introduction at a big stage to the Epsilon player Royalty who had an all around fantastic tournament.

The crowning of Royalty

One of the most interesting things to come out of Epsilon’s performance at the Season 3 Playoffs, was seeing how well Royalty played. At the start of the Season 3, Epsilon picked up the not so well known amateur player and put him on his first pro team. For never having been on a pro team before or playing in major tournaments before, Royalty by all accounts greatly exceeded expectations and burst onto the competitive Call of Duty stage.

As mainly a sub-machinegun player, Royalty led Epsilon in the slaying department at the tournament, something that no one expected from an unknown player going into the tournament. At the end of the playoffs, Royalty finished with the eighth best slaying K/D ratio , an impressive feat for any player.

One of the most interesting things about Royalty, is that he does not use a SCUF Gaming controller, a controller which almost every pro player uses. He also plays at an incredibly high game sensitivity of 12, while many pro players play at around three-to-four sensitivity. When asked about his highly unusual play-style, Royalty said that, “ Playing on a high sensitivity benefits my play style, I usually try and pick my fights by playing in the hill in hard point or flanking on uplink. I’m so used to playing with no scuf that I honestly think I’d be as good if I had one.” With how well he played at the event it certainly seems that his unorthodox style of play caught teams off guard and greatly benefited his play. If he can keep his slaying ability and excellent sub-machinegun skills up he could become a force in the CoD eSports scene.

What’s next for Epsilon?

After the tournament, to the surprise of many, Epsilon decided to drop Royalty for Ulysses “ AquA ” Silva. This change was not expected because their previous roster had exceeded so many expectations so quickly. This change though, looks to bring back three-fourths of Team Revenge’s dominate team , who had placed second at the Call of Duty Championships 2015 .  Remy, Nagafen, and AquA from the highly successful Team Revenge, are now joined with the veteran Parasite as they head into the MLG World Finals, Oct. 16-18 in New Orleans.

The team will now be going into the event with very high expectations after their terrific placement at this past event. At the very large World Finals with a $250,000 prize pool, Epsilon will be doing their best to defeat favorites FaZe Clan and OpTic after their close defeats to them at the MLG Season 3 playoffs. Look for this team to continue to place well after they performed well and turned many heads at this past event.

What are your thoughts on Epsilon eSports performance? Let us know in the comments. Follow us over on Twitter – @eSportsNation for more event coverage.