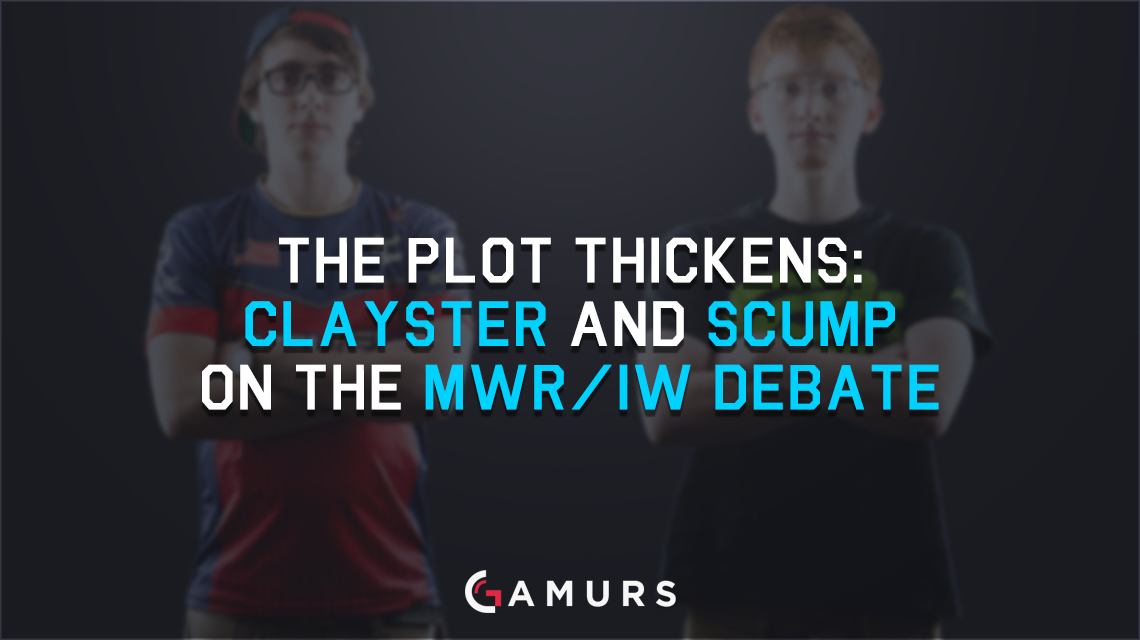 The Great Call of Duty Debate, as some are calling it, began before the release of Infinite Warfare and Modern Warfare Remastered.

“Which game should we play?” is a question even casual fans were asking after learning that Infinite Warfare is not set on planet Earth, but rather throughout the solar system. Call of Duty in space? How would that work? The first trailer for the game soon became one of the most downvoted videos of all time on YouTube, and gameplay hadn’t even been seen yet.

The games are out now, and 10 days later, the debate hasn’t settled. In fact, it has intensified. Fueling the fire are complaints about Infinite Warfare, with nearly every aspect of the game being scrutinized. People say the maps aren’t good, some say the guns are unfair, some say the movement is terrible, and others critique the spawn system. The discussion has quite literally spread like wildfire throughout the competitive community, and at first glance, it would appear that everyone is on the same side – the side of hating on Infinite Warfare. However, there are still some players who have made it their duty to defend the game, and at the same time, defend the direction, which is clearly inevitable, that the competitive scene is going in.

Championing the side defending Infinite Warfare is James “Clayster” Eubanks, a Call of Duty champion and professional player for FaZe Clan. Clayster was invited by Activision and Infinity Ward to their studios to test the game, return criticism and suggestions, and unveil the esports aspect to the rest of the world. For his role, Clayster has been subjected to criticism, most commonly being called a “lap dog” for Activision. While insults directed at him and the game itself keep coming, Clayster insists that Infinity Ward is listening and is already working on the suggestions he and other pro players made at the esports reveal.

People want a boots on the ground game, but the truth is that Infinity Ward had been working on Infinite Warfare way before the complaints about Advanced Warfare, the first jetpack Call of Duty title, came in. They had three years of development. They probably decided at the very beginning that the game would be based in space and that players would have advanced movement. Once the groundwork is laid, there is no going back.

In his video, Clayster highlights the fact that the competitive community finally has support from both Activision, who started the Call of Duty World League last year, and Infinity Ward, who previously ignored the esports scene for the most part. The support and attention is something the Call of Duty esports community has desired for a long time, but now we are abusing it, Clayster believes.

Complaints from influential people are nonstop, creating an even larger pool of people who voice dissatisfaction for the game. But complaints aren’t helping the scene, Clayster argues, unless real effort is made to legitimize them. By constantly dissing the game, pro players are tearing down the scene they have worked so hard to build up. This is not the future Clayster, or anyone for that matter, wants for Call of Duty.

On a positive note, Clayster says that Rigs are not as bad as overpowered Specialists were on Black Ops III. Right now, spawns are bad, but those can be fixed easily. And while people are complaining about maps, they are ignoring the fact that there have always been maps in the competitive rotation that players don’t enjoy, even as recent as last year.

“We can change what is wrong,” says Clayster. “We just have to give Infinity Ward the chance to do it.”

On the opposite side of the spectrum is Seth “Scump” Abner, a Call of Duty phenom and member of the highly influential OpTic Gaming.

“I don’t hate [Infinite Warfare],” Scump says, “…Could I see myself playing pubs for hours and hours on end? No.”

Instead of a technical approach to the debate, Scump took a personal one. He doesn’t feel that Infinite Warfare is fun to play, but he loves playing Modern Warfare. Even though Modern Warfare is nine years old, it’s still a great game and a lot of people agree.

Scump said, “I love pubs,” but public matches on Infinite Warfare are not his thing. He says it doesn’t feel the same.

Scump believes that if Infinite Warfare is played in the Call of Duty World League this year, and it most likely will be, it will be a long and stressful year for him. But will it be a good year overall?

If it were up to him, Scump says he would choose Modern Warfare Remastered to be the competitive title this year. A few tweaks would have to be made to make it better for competitive play, but Scump thinks the game would be great nonetheless. He also understands that, ultimately, pro players don’t make that call.

If you watched both videos, like I did, Clayster is the clear winner of the debate. He made strong points, fueled by passion for Call of Duty as an esport and the future he wants for it. He made rational arguments in defense of Infinity Ward and Activision and is optimistic about the future. His hardest hitting message is that if complaints continue, the game itself might not be the death of Call of Duty esports, but that lack of viewership due to influencers spreading harsh opinions to their fans will.

Scump did not make a strong argument for why Infinite Warfare is bad, other than saying he did not have fun playing it. But that message still hits home, because video games were always meant to be fun. However, esports are a serious matter for players such as himself, who have made playing this game into their career. To be fair, Scump was playing Modern Warfare while speaking to the camera and therefore a bit distracted, while Clayster was focused entirely on his message. Still, Clayster wins this debate hands down.