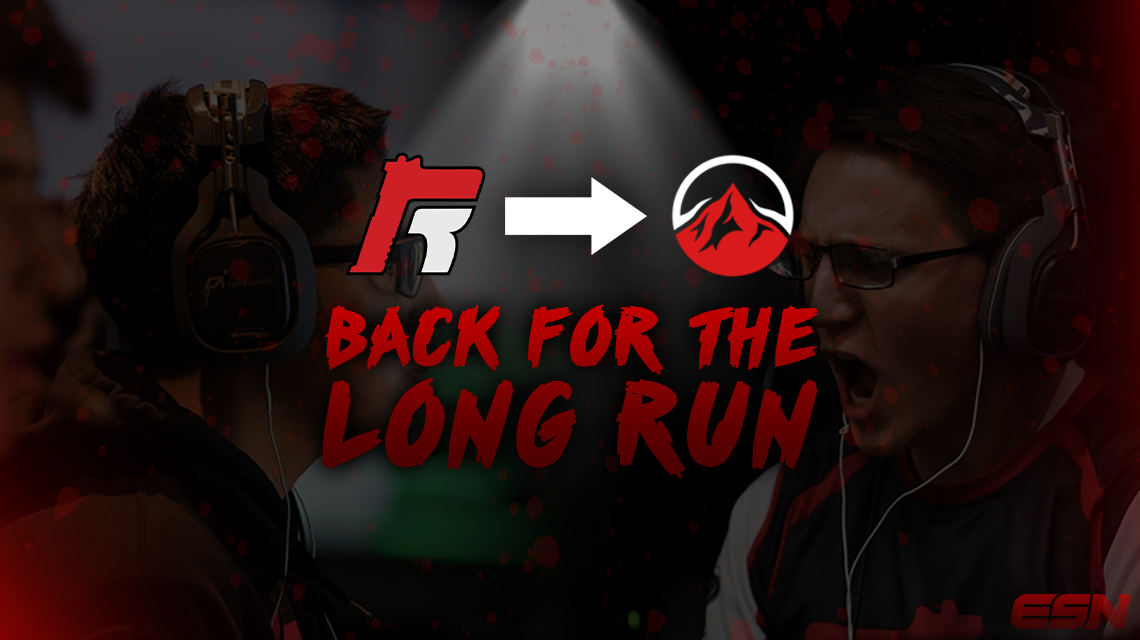 Team eLevate has announced the acquisition of Team Revenge’s former Call of Duty World Championship® 2015 runners-up. These four competitors have had quite the sporadic run throughout this year after being separated; their long-awaited reformation has finally come.

What happened with tR?

Before March 2015, these players were not really known within the Call of Duty eSports community; that all changed after their stellar performance at the world’s biggest event. For those that didn’t know or are new to the competitive scene, these four not-so-known players ended up going home with a shared prize of $200,000 and a second-place finish at CoD Champs. No one could have expected this underdog team to finish the way they did. It was arguably one of the most awe-inspiring moments in the history of CoD eSports.

At CoD Champs, Team Revenge was able to secure the first spot in their pool for Group Play, finishing with an undefeated 3-0 record and a 9-2 map count. As a result, the team was sent to the Upper Bracket in the double-elimination knockout stage. The underdogs were able to successfully carry their momentum after defeating PLT.Mindfreak , FaZe Red , and Prophecy . They were knocked down into the Lower Bracket after losing a close series to the eventual champions, Denial eSports, and were forced to rematch against FaZe Red. Team Revenge took the Lower Bracket finals 3-1 against FaZe and pushed on to fight against Denial yet again to try to become world champions. The team came up short, losing the series 3-2. However, they went home knowing they were four of the world’s best players in Call of Duty. For more on how the team performed at CoD Champs, read our Team Revenge Turns Heads feature.

As previously mentioned, shortly after the team’s triumph at the world championship, the team sadly disbanded and the players were forced to go their separate ways and find unfilled league teams. Team Revenge’s founder and former CEO Rafael “ Pittsburgh ” Alcantarilla tried his best to secure and purchase a spot within the MLG Pro League, but his attempts were fruitless; teams already within the league were not willing to sell their position. It seemed unfair how the world’s second-best team in Call of Duty®: Advanced Warfare , at the time, were unable to secure a spot in the pro league, while other, less-talented teams remained.

Where’d they all go? Well in April, Remy ended up joining Epsilon eSports.NA which later reformed to Epsilon eSports , after they disbanded their European division in September. Remy would stay loyal to Epsilon all the way through Advanced Warfare. Faccento returned to Team Orbit NA, which reformed to Team Orbit , for a reason similar to Epsilon. He remained at this organization until rejoining his former teammates at Team eLevate. On the other hand, AquA would transition between to other teams– Prophecy and Team EnVy –before joining up with two of his original tR teammates at Epsilon. Alongside AquA, Nagafen was able to join Prophecy and remained there until May. He left his tR and Proph duo to join Epsilon.NA.

But let’s forget all that. The original tR squad is finally back together and are “excited to all be playing together as a team again, especially under the eLevate organization,” according to AquA. They will definitely be top contenders for the Electronic Sports League -run “Pro Division” of the Call of Duty World League and Black Ops III competitive season. Team eLevate’s captain also told ESN, "We're all great friends and we've been playing together for a while, so going into this game I think we'll have an edge over our competition. Thanks to eLevate and all our fans for the opportunity!"

Now that the team can start fresh without being forced to separate, it’ll be interesting to see how they perform in the 2015-16 season.

They’re back for the long run

What many might not have noticed is that Team eLevate signed its four players on one-year contracts to last the entire Black Ops III season. For the business-side of CoD eSports, this is another huge step towards becoming a more professional competitive title, similar to League of Legends and Counter-Strike .

Our philosophy this time around has been that we want to give a team a chance to develop its chemistry and build, so we made our contracts last the entirety of Black Ops III. In the Call of Duty scene, we see a lot of roster changes happen between majors, sometimes entire rosters get dropped, and we don't think that creates a healthy community. It certainly does not serve to the benefit of the organizations, the players, or the fans. This move will hopefully show that we are committed to the competitive scene and confident in what this roster will do.

Well-known eSports organization Evil Geniuses attempted to create some of the first contracts in Call of Duty with their new roster –consisting of Patrick “ ACHES ” Price, Tyler “ TeePee ” Polchow, Ian “ Crimsix ” Porter , and Damon “ Karma ” Barlow –which was purchased from compLexity Gaming .

The team had high hopes after claiming the Call of Duty World Championship® 2014 title for Call of Duty®: Ghosts ; however, EG disbanded their CoD division on November 2015, due to internal issues and inconsistent placings. Hopefully this year, the same doesn’t occur for Team eLevate and their new roster.

What are your thoughts on Team eLevate acquiring Team Revenge’s former team and putting them on one-year contracts? Let us know. Follow our Twitter - @eSportsNation for more coverage on Roster Mania.