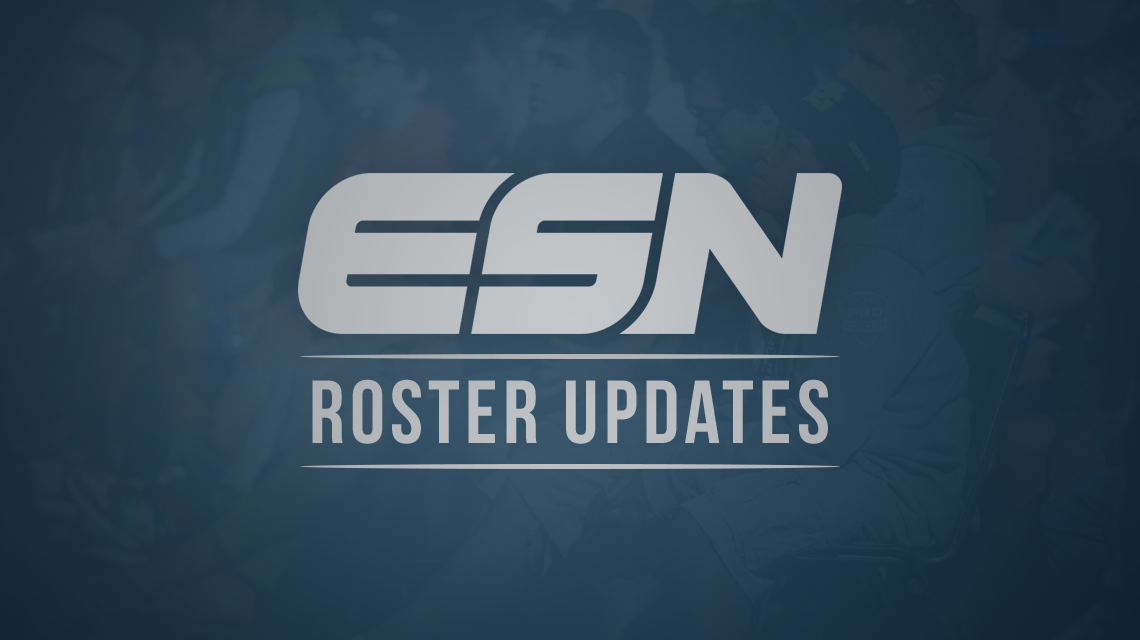 With Major League Gaming’s Season Three League Playoffs coming to an end, multiple teams will make roster changes before the release of Advanced Warfare next week.

The roster rules for the MLG CoD League will play a significant role in the changes that we will see this week. Adam “MrAdamAp” Apicella, Executive Vice President of MLG, has recently announced that the eight qualifying teams from the MLG S3 CoD League Playoffs must have at least two players that qualified for the league on their roster.

With that being said, teams will most likely make drastic changes heading into the Advanced Warfare Season. The game is set to be unique and unlike any Call of Duty in the past. The different play styles of pro players will be crucial when deciding any final rosters.

*Note that each confirmed roster change has been listed in chronological order.

FaZe Pro has released Parasite, and will now be looking for a new 4th member going forward into Advanced Warfare. More news to come! #FaZeUp

The current team-of-three for FaZe Competitive released a video on Censor’s channel discussing about the recent release.

We have officially released @Neslo_tK from @Team_Kaliber. He's a great player and we wish him the best of luck.

Neslo decided to make a response video to the recent events including a “Twitlonger” on the situation.

We have officially released @Neslo_tK from @Team_Kaliber. He's a great player and we wish him the best of luck.

I have been released from Curse, would like to thank them for all of the opportunities they provided me this past year. With that said F/A.

about that time, F/A

Both Matthew “Burnsoff” Potthoff and Vaughn “Tipsy” Brown were released by Curse Gaming on Monday evening, the day after the event. Curse CoD now consists of Steve “Mochila” Canle and Ian “Enable” Wyatt, who are looking for two more players to add to the team.

Danny “Loony” Loza has officially announced that he has left Rise Nation to join Team Kaliber and fill in Neslo’s former position.

GL to @TheRiseNation. We have decided to part ways with each other. Best org I've been apart of. Thanks for everything forreal.

Killa, this Tuesday, has announced that he has decided to leave OpTic Nation and become a free agent via Twitter. This has not been officially confirmed by the OpTic Gaming twitter.

@OpTicKilla93 @OpTicGaming Next time a call or text would be nice but best of luck adam!

It was announced that Jermey “StuDyy” Astacio was released from Denial eSports late Tuesday night. Currently Denial is a team-of-three consisting of Tom “ZooMa” Paparratto, Renato “Saints” Forza, and Chris “Replays” Crowder who are looking for one.

Karma No Longer on FaZe

According to Censor, Karma is parting ways with FaZe Clan after being loaned to them by Evil Geniuses. Technically, Karma is still under contract with EG and we most likely will not find out his new team until the EG split becomes official.

We will continue to update when more information becomes available.

Leaving a league spot is risky but being unsure is a horrible feeling.

Early Friday morning, Dillon “Attach” Price has officially declared he was a free agent, and has decided to leave Rise Nation. Shortly after, Attach announced that he had joined up with Denial eSports after the release of Studyy.

I am now officially a F/A i would like to thank @TheRiseNation for everything they did for me they are a great org!

Matthew “Formal” Piper has recently decided to announce that he has left Team EnVyUs, Saturday afternoon. Hastro, JKap, and Formal have all stated their twitlongers on the situation.

Okay, so after much thought and talking with stro, I have decided to declare Free Agency. Basically, (cont) http://t.co/GBw8PeOUrU

So things have been taking a lot of twists lately, but @NAMELESS and I will be staying on nV now along with (cont) http://t.co/NxFqcY0iPr

Jordan “Proofy” Cannon has been released from OpTic Gaming and is now a free agent. He posted a twitlonger shortly after the pre-released article of Formal joining OpTic Gaming, stating his current position.

Getting Released, Moving On

After being released from OpTic Gaming, Clayster wasted no time in joining a new team. He found an opportunity on the Season 3 Champions, Team EnVyUs. Essentially he swapped places with FormaL.

Really excited to be apart of @TeamEnVyUs w/ @NAMELESS @MerK_nV & @JKaplan_nV ! Thanks @hastr0 for the opportunity! Let's get some W's y'all

With the additions of Fears and Diabolic, the Rise Nation roster will be set heading into Advanced Warfare. They will be joining Whea7s and Pacman.

Noble Pro Gaming have officially announced their new competitive roster going into the Call of Duty: Advanced Warfare MLG Pro League Season One. This roster will consist of Parasite, Killa, StuDyy, and MiRx.

With this roster containing three of the Call of Duty World Champions, these players along with StuDyy will be looking to repeat the success they’ve had in the past. The organization will go by Noble Impact.

ProoFy has decided to remain under the OpTic organization, but this time under OpTic Nation. Later this afternoon it was announced by both ProoFy and OpTic, that he would be joining the team alongside Marcus “MBoZe” Blanks.

Ricky was released Friday, November 14 from OpTic Nation. He left a twitlonger in response to the situation. He is currently a free agent looking for a team going to MLG Columbus.

Steve “Mochila” Canle was released from Curse CoD and is now a free agent. He will also be looking for a team to attend MLG Columbus. Mochila claims that he will be remaining at the Curse House for some time, as it is where he temporarily lives.

Ian “Crimsix” Porter has officially joined under OpTic Gaming to finalize their roster consisting of NaDeSHoT, Scump, FormaL, and himself. A Call of Duty World Champion and former Evil Geniuses player is going to be a strong addition to the squad.

Welcome to the team, @Crimsix! Also, welcome to @TheOpTicHouse! pic.twitter.com/jHYqmzB2kH

Crimsix has arrived at the OpTic House to play alongside his teammates in preparations for MLG Columbus and the MLG CoD Pro League Season One.

With the release of Ricky, OpTic Nation needed to pick up two players in order to finalize their roster going into Call of Duty: Advanced Warfare. So, they decided to pick up both World Champions and former Evil Geniuses’ players Tyler “TeePee” Polchow and Damon “Karma” Barlow to fill the spots. OpTic Nation now consists of MBoZe, ProoFy, TeePee, and Karma.

Patrick “Aches” Price has recently been released from his Evil Geniuses’ contract making him a free agent. He was quickly picked up by FaZe Pro, which was announced by their captain Doug “Censor” Martin. FaZe now consists of himself, Censor, and Apathy. They’re a team-of-three looking for one player going into MLG Columbus.

We'd like to welcome @EGACHESpp to our team! Our roster is currently myself, Apathy, and Aches! #FaZeUp

FeaR release TuQuick and Legal to pick up Dedo and Neslo

Team FeaR have decided to release both Aaron “TuQuick” Chang and Tyree “Legal” Glover in order pick up both Kenneth “Dedo” Dedo and Jeremy “Neslo” Olsen. Dedo was recently released on his contract from Evil Geniuses and was quickly spotted by FeaR.

FeaR has released legal and tuquick and will be going to Columbus with Dedo and Neslo. More information soon!

Ian “Enable” Wyatt has been added to the former Most Wanted roster which now consists of himself, Spacely, Slacked, and Classic. The team-of-four will be announcing their new organization that they’ll be playing under soon, so be on the lookout for that.

Would like to announce myself Slacked and Classic decided to team with the Don @enable_ ! Org to be announced soon! Give him a follow!

FaZe has recently announced that they have picked up Austin “SlasheR” Liddicoat to finalize their roster of himself, Censor, Apathy, and Aches going into MLG Columbus. Formally a free agent after being released from Noble Pro Gaming, SlasheR has finally found a team to call home for Call of Duty: Advanced Warfare.

Prophecy has officially picked up Ricky, Parasite, Legal, and Fears to complete their roster going into MLG Columbus. This team will be a very strong contender going into the event. Seemingly know to be a team composed of the “leftovers” from Roster Mania, they will be looking to prove themselves as a top team. Hopefully this will be one of the concluding Roster Mania changes that we will be seeing until after MLG Columbus.

The team-of-four consisting of Enable, Slacked, Mochila, and Classic have finally found a home under the Justus organization.

Tipsy is healthy and alive. He is just dealing with some personal issues that are preventing him from being able to compete at this time.

Not going into details, something came up with Tipsy, no one sketched or dipped just an unfortunate situation happened.

Vaughn “Tipsy” Brown has recently left Automatic Reload for personal reasons. These reasons are unknown and private, and conflict with Tipsy’s once playing time. The team resulted in making a decision to part ways with Tipsy and find a new fourth.

Automatic Reload several days later made an announcement stating that they had picked up Danny “Miyagi” Ho. This will be a strong addition to the squad as Miyagi placed very well alongside his former teammates at the end of Call of Duty: Ghosts under Noble Pro Gaming.