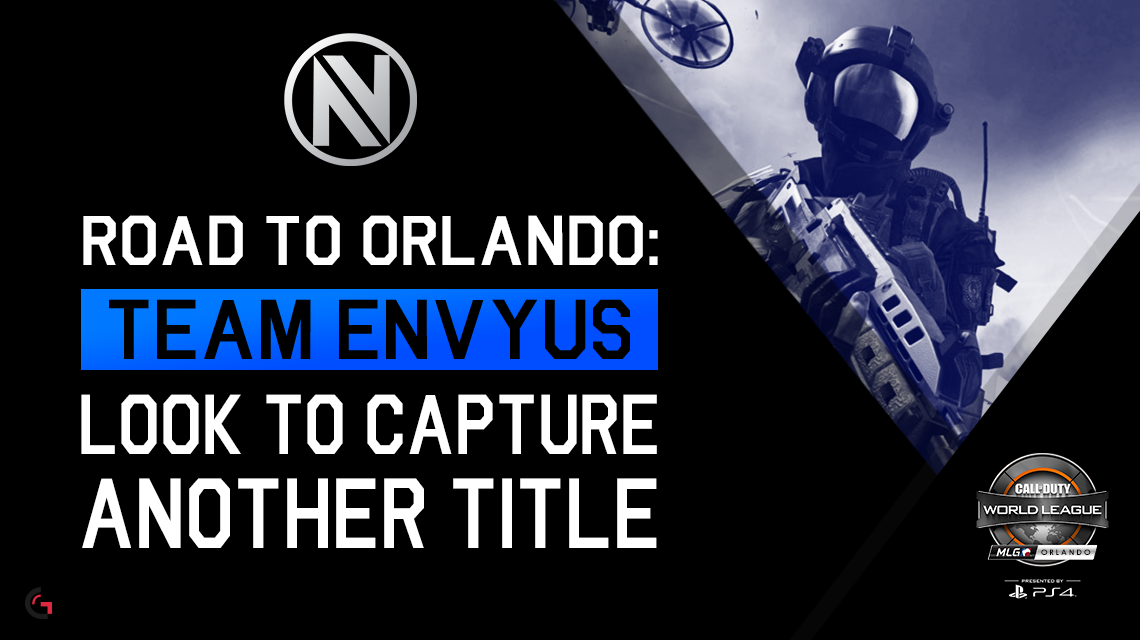 MLG Orlando is just a few days away and Team EnVyUs are going in with more confidence than ever. After winning Stage Two of the Call of Duty World League in both the regular season and the playoffs, EnVyUs are the hottest team in Call of Duty right now, at least on paper. Their biggest opponents, OpTic Gaming, are not going to let them take the crown easily, and neither are the other teams who are starting their preparations for the Call of Duty World League Championship by competing at MLG Orlando.

Team EnVyUs has had an interesting year. They started out by reviving the TeePee/ACHES duo to compliment JKap and Slasher, but that roster saw minimal success. After finishing Stage One of the Call of Duty World League in fifth place, EnVyUs made the bold decision to drop both ACHES and TeePee, replacing them with Apathy and John.

The removal of TeePee from the roster seemed illogical to many, but ACHES had many public clashes with his teammates that fueled his dismissal. TeePee moved on to join Luminosity temporarily and then made the decision to retire from playing Call of Duty and become an analyst for the game instead. ACHES, on the other hand, is still playing and just recently rejoined compLexity Gaming, reminding Call of Duty fans of the legacy he once helped create on the organization. Removing two former Call of Duty champions seems like an odd move, but as it turns out, the roster changes made a huge difference.

The new Team EnVyUs is far from perfect, but they have seen a world of improvement in the second half of the Call of Duty World League. Overall placings have improved immensely, with the team earning first place finishes for the first time in nearly two years (the organization, not the players).

The team overcame a shaky start in Stage Two to finish the regular season with a six-game winning streak and then dominated the competition in the playoffs, going 12-2 in map count against their opponents. In the video below showcasing the Stage Two finals, Team EnVyUs dominated Dream Team, winning the series 4-1. Their teamwork and smart plays allowed them to keep a comfortable lead on all of the maps they won. To strengthen their prospects heading into MLG Orlando even more, EnVyUs managed to win the last 500 Series tournament.

The groups for MLG Orlando have already been decided, and based on their first place finish at the Stage Two playoffs, Team EnVyUs has been given the first seed and were placed into Group A. Joining them in the group is the ex-TSM roster of Whea7s, Pacman and Ivy, who have picked up Burnsoff in place of ColeChan. Though untried as a group of four, this team did poorly in the Call of Duty World League last season, which led to Team SoloMid dropping them from the organization.

Also in this group is Team eLevate, whose season took a drastic turn out of the blue midway through. At MLG Anaheim, eLevate managed to take second place after upsetting Rise Nation. While their performance at Anaheim was exceptional, eLevate went on a huge losing streak at the end of the season and missed the playoffs. However, the roster decided to stick it out instead of making changes. Based on recent results, Team EnVyUs are the clear favorites to win this group, but the competition will be unrelenting.

“I know my team has what it takes to win, it’s just a matter of showing up and playing our game,” Slasher told us.

Though it will take more than a win at Orlando for Team EnVyUs to be considered the best team in the world, they are on the right path. OpTic Gaming has held that title over the course of the last two Call of Duty titles, but their grasp is anything but firm. OpTic has been prematurely eliminated from multiple tournaments this year, but no other team has been able to make a claim for the throne because their good form never lasts long. But, Team EnVyUs has that opportunity this weekend if they manage to continue winning. They may even be able to face OpTic along the way, which is exactly what the team hopes will happen.

“… because we didn’t get the opportunity to play them at [Stage Two] finals,” Slasher said.

The next step after MLG Orlando is the Call of Duty World League Championship, which will be the largest Call of Duty event of all time. Every team in the game is looking forward to it, and Slasher knows they are not the only ones preparing.

“In my opinion, the competition is better than it has ever been across all regions,” Slasher said. “I’m expecting a lot of good matches the weekend of Champs.”

Another tournament title would not only be significant for Team EnVyUs’ Call of Duty team, but for the organization in general. Originally a Call of Duty based organization, Team EnVyUs diversified by picking up teams in other games. The most notable originally was the French Counter-Strike: Global Offensive roster that won a Major and placed second in another.

Now, the organization is involved in a variety of other esports and is a top contender in just about all of them. For example, EnVyUs Halo placed third at the HCS Summer Finals and EnVyUs Gears of War placed third at the MLG Open this weekend, and their North American League of Legends team just qualified for the playoffs in the League Championship Series (LCS).

All of this success has attracted the attention of wealthy investors who are working with Team EnVyUs to build a unique practice and entertainment facility in Charlotte, North Carolina for the organization. Team EnVyUs is a pioneer in the esports world, and it would be only fitting that their Call of Duty team lead the way.

Josh Billy is a long time Call of Duty fan. Contact him by email at [email protected] or on Twitter @Orbit_CH3MISTRY.