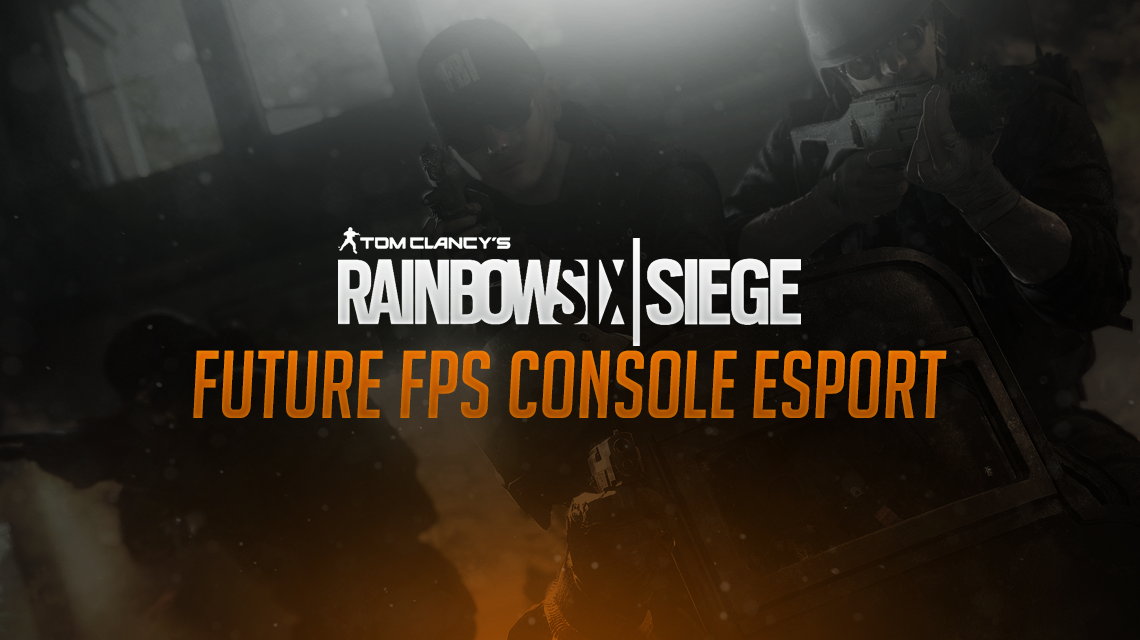 First-person shooters (FPS) have become quite stale within the eSports scene lately, and many believe it’s time for something new. Thankfully, Ubisoft Montreal has been developing the answers to our needs with the upcoming release of Tom Clancy’s Rainbow Six® Siege. The closed beta is currently live until Oct. 4, and it’s been quite a blast, literally.

We last saw the game featured during Ubisoft’s press conference at the Electronic Entertainment Expo back in June, where the developers showcased multiple gameplay trailers. The game’s mechanics, environment, and returning co-operative multiplayer game mode, Terrorist Hunt, seem to have caught the eye of many competitive gaming enthusiasts. The Rainbow Six® video game franchise has stepped its foot in the door of eSports in the past, especially throughout the prime times of Rainbow Six®: Vegas (2006) and Rainbow Six®: Vegas 2 (2008), and is definitely not afraid of making a comeback with Siege’s release in early December. So far, Ubisoft and its partners seem be to making the game look competitively-based, and I, along with many others, are excited for a fresh contender.

If R6S becomes an eSport, it would be joining the ranks of both the familiar Battlefield® 4 and Counter-Strike®: Global Offensive titles as a five vs. five competitive first-person shooter. Siege Game Designer Andrew Witts believes that having 10 players in-game will create a “tight teamplay experience where communication and cooperation is vital to success on both attack and defense.” It’s hard not to agree with Witts; the game’s layout forces you into close quarters combat (CQC) scenarios, where team communication and coordination will play an important role. Players who utilize teamwork through both strategy and creativity will succeed in this game, in contrast to the familiar run-and-gun operators in other FPS games. With the abilities to blockade and reinforce windows, doors, and walls/ceilings; set wire-traps and explosives; and the ability to hide behind mobile barriers as a defender, being able to plan ahead as an attacker will be crucial before rounds commence. Similar to CS:GO, a preparation time has been implemented in-between rounds. While you won’t need a currency to purchase weapons, protective gear, equipment, and ammunitions as you would in Counter-Strike, you will still have a brief period available as a Counter-Terrorist operator (yes, I said CT, they are attacking in Siege) to select and edit your classes, send in drones to determine the objective/hostage site, and select a spawn point along with your teammates. On the Terrorist-side however, players will be able to station those defenses I told you about earlier, allowing them to prepare as best they can for an impending breach. Speaking of breaching and clearing, R6S provides verticality in its single compound-like maps. Each and every hostage building provides four floors in its entirety, which essentially includes: garage, living room, office, and bedroom floors. If you are unable to spot the terrorists and/or locate the objective within the allotted time, have fun checking every floor and room. That’s the point though, right? Ubisoft Montreal was aiming to make this game feel action-packed and heart-thumping through every room clearance, especially with Siege only having three-minute rounds, forcing you to pick up the pace at certain points during your attack rounds. Luckily for the defenders, it’s just a sit-and-wait game, until you start getting shot at of course. If you couldn’t tell by now, R6S will feature a single-elimination (only one life per round) attack and defend format, similar to Counter-Strike and Battlefield’s competitive “Bomb/Hostage Scenario” and “Defuse” gamemodes respectively. What makes it different from CS:GO though, is that once downed, you can be revived by a teammate directly, unless you’re finished off by an opposing operator when in “final stand.” Like Call of Duty’s popular Search and Destroy gamemode, Siege’s Hostage and Team Deathmatch gamemodes will create jaw-dropping moments and crowd-roaring plays. At least, we’re hoping this happens. CQC is the reason as to why viewers will stay engaged to live gameplay, whether it be at a future Rainbow Six broadcasted major event, or during a player’s live stream of an online tournament. The Siege developers were even kind enough to build us a “Spectator Cam” in order to help newcomers “learn the maps and strategies much quicker,” as stated by Christ Hendry, a Level Artist at Ubisoft Montreal, and “see how real players take on a match.” https://www.youtube.com/watch?t=44&v=sbuB-69euUw The developers have certainly been keeping a close eye on the eSports scene, with the addition of their “Outlines” feature, as seen at 0:38 within the Spectator Mode Walkthrough video by Ubisoft, which is a spectator option to see opposing players and the objective outlined through the walls and floors. As mentioned by Chris, “It’s color coded so we can tell which operators belong to which team, and clearly identifies the objective.” When the rounds start getting chaotic, shoutcasters can quickly shoot over to “Tactical View,” a primary mode within the Spectator Cam where we can look at both of the teams’ progression from a top-down, bird’s-eye view of the entire area. As the video states, this “lets us locate operators anywhere on the map,” and through the Outlines feature, “through walls and floors.” Again, this is the eSports experience the game continues to offer.

What does Siege lack?

As far as we know, private lobbies will be included within the official release of the game on PlayStation 4, Xbox One, and Microsoft Windows PC’s. The question is: will they be customizable? Currently, it takes three rounds to win a game. Obviously, that’s way too short for a competitive match when games like Counter-Strike last for around 30 rounds. Having the option to alter settings such as banning weapons, lengthening or shortening rounds, etc. will allow tournament hosts to determine an eSports ruleset very quickly, with players exposing overpowered items and unfair regulations. This will only improve a possible eSports experience that we expect to see in R6S. On another note, Siege has no campaign. Yes, you’re paying $60 for a multiplayer-only game. It’s questionable. On the bright side, as an eSports competitor, you’ll be likely to see more game updates and fixes to issues within the game. https://www.youtube.com/watch?v=vv3kOiz4Y2Y Fortunately, we’re also provided with “Terrorist Hunt,” a cooperative gamemode where you and four other friends can face off against 20-30 terrorist bots, who are hidden within the main building. What most people (like myself originally) didn’t know, is that you can play this alone in the “Lone Wolf” option. It’s a lot harder than you think but tons of fun, especially on the “Realistic Difficulty,” which is really hard to beat alone. All in all, Rainbow Six Siege’s closed beta was a breath of fresh air. Hopefully the game will become a top-end eSport within the near future. You can preorder the game now for $59.96 on Amazon.com. The game releases on Dec. 1, 2015. What are your thoughts on Rainbow Six® Siege most likely becoming an eSport? Let us know. Follow @eSportsNation for more coverage on the competitive gaming realm.