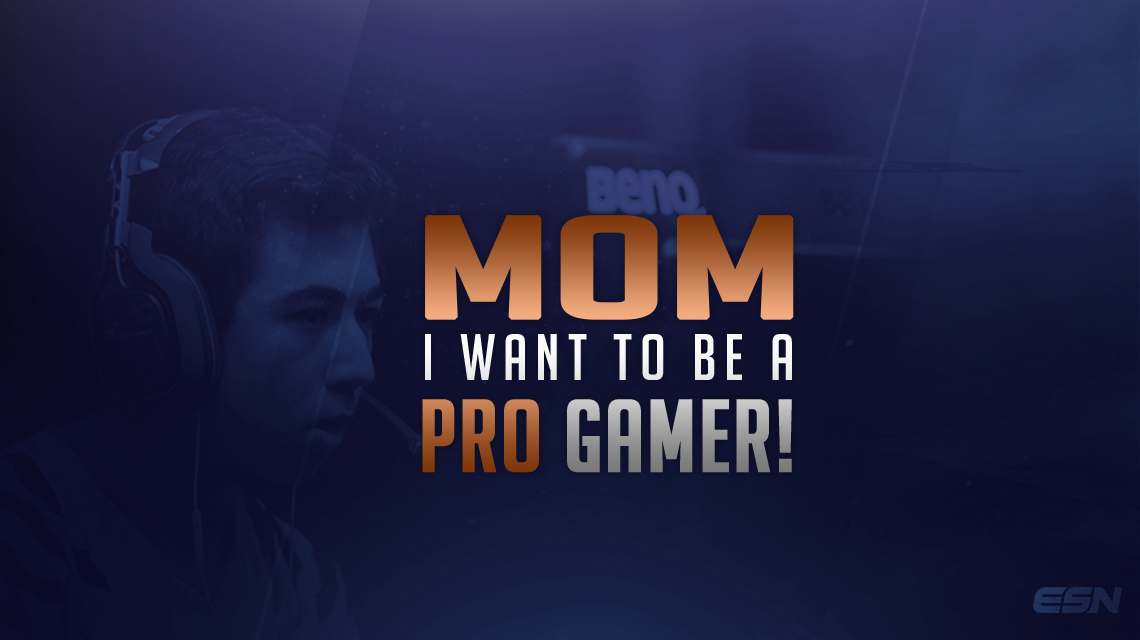 With the growth of eSports on a global scale, more young boys and girls are growing up and aspiring to be professional eSports players. While there are a handful of games on multiple platforms to choose from, the status of a professional gamer is one that very few players ever get to achieve.

Nonetheless, young players continue to play video games with this goal in mind. The competitive drive and spirit is definitely one tool that can help propel these players to their dream, but there will always be obstacles along the way.

One such obstacle that numerous professionals have cited is the lack of support or disapproval of their goal from their parents.

From a personal standpoint, although I am not a professional gamer, I know that my parents were never supportive of my gaming habits. In high school, I was not allowed to play during the week, even though all my other friends could play at night. On the rare occasion that I was allowed to play during the week, it would only be for about an hour or two.

Regardless, the point is that while some parents are supportive of some of their children’s goals or hobbies, others act as obstacles either because they think gaming is foolish or they do not quite understand the world of professional eSports.

However, there are always outliers, and one of these rare situations in which the parents have been very supportive of their son’s goal to becoming a professional video game player involves a Call of Duty player who has rose to the top as one of the winningest players in Call of Duty®: Advanced Warfare: Dillon “Attach” Price.

Attach has taken the Call of Duty scene by storm, starting as a newcomer to the competitive scene last year in Call of Duty®: Ghosts. However, 2015 has been an amazing year for Attach, as he won the 2015 Call of Duty Championship with Denial eSports and has since gone on to win two of the past three LAN events as a member of FaZe Clan.

“When Dillon first stated that he wanted to become a pro video gamer, I was not thrilled with the idea,” Mrs. Price said. “I wanted his sights to be set on attending college to work towards a degree in whatever field interested Dillon.  However, I said “Ok, if that’s what you want to do, you can do whatever it is you set your mind to.”

Momma Attach realized that it might be a difficult journey for her son, but she did not want to discourage him away from his dream.

“Although, I thought to myself that the odds of him actually becoming a pro at anything were very much against him, I did not know anything about the video gaming scene at the time,” Mrs. Price said. “I do believe that as a parent, part of my job is to support my child with his dream.”

Along with Mrs. Price’s hesitations about Attach’s dream came some restrictions on how much he was allowed to play video games, similar to the situation I talked about earlier with my parents. Their children’s education is usually the main priority for any parents, and Mrs. Price would not allow Dillon’s dream of becoming a professional gamer to inhibit his performance in the classroom.

“Ron (Mr. Price) and I did put restrictions on the amount of time Dillon was allowed to play video games,” Mrs. Price said. “Dillon was only allowed to play until a certain hour and not until his homework was complete.”

The very proud parents of a 2015 high school graduate AND a Cod World Champ! ❤️ pic.twitter.com/LtGep47ryk

Despite these restrictions, Attach was able to perform well enough in the classroom to continue practicing Call of Duty up to the point where he started to get noticed by other players in the community, which eventually led to him getting his first chance to attend a major LAN event. However, before this, Attach started to attend local LAN events to test his skill against other players in his locality. As the caring parent that she is, Mrs. Price was slightly nervous about her son attending his first LAN event.

“I was very hesitant about allowing Dillon to go to a LAN event,” Mrs. Price said. “I was very nervous, so I made sure that he went with a friend that I knew and that there was a parent who would accompany them.”

As time went by and Attach started to attend more of the major LAN events, so did Mrs. Price. In fact, she has been able to see some of the greatest moments in her son’s young professional Call of Duty career.

“I love to watch Dillon compete at a LAN event!” Mrs. Price said. “It is a very exciting, as well as a very nerve wracking experience, to watch my son and his team compete. As I am watching the competition, I am in awe of the level Dillon has attained as a professional video game player. I feel a tremendous amount of pride when I watch Dillon compete.”

Looking back to when Attach told his mother he wanted to be a professional gamer, Mrs. Price is extremely proud of what her son has accomplished so far in his career.

“I am amazed at Dillon’s growth and at his success in Call of Duty!” Mrs. Price said. “I am thrilled to see how successful Dillon has become in this Call of Duty profession. Dillon has worked very hard to reach this level of success. He makes us very proud.”

Throughout all of this, both Mr. and Mrs. Price have been extremely supportive of their son’s dream, and that can be looked at as one of the main reasons he has been able to be so successful thus far. While all parents are not as supportive of their children playing video games as Mrs. Price is, it is important for parents everywhere to learn from their story so that they can begin to become more informed about the world of eSports.

Mrs. Price has a lot of helpful advice for players who are trying to convince their parents to allow them to pursue a career in gaming, as well as advice for parents who are not as willing to allow their children to try to become professional video gamers.

“I would tell those who are trying to convince their parents to allow them to go to LANs to be responsible with school, household duties, and family responsibilities first,” Mrs. Price said. “Try to go to local LANs first, if possible, with friends and be taken by a parent or guardian.”

“I would tell parents that the professional gaming scene is filled with young people who are smart, responsible and respectful,” Mrs. Price said. “These are very talented young people who have worked very hard to achieve their goals. It takes forethought, a quick mind, a fast reaction time to become a successful gamer. I would say to keep an open mind to the pro video gaming world. It is a very exciting and growing scene with very good and dedicated young people.”

Thus, it is easy to see how parental support can obviously go a long way when it comes to a child’s pursuit of their dreams. The important thing to take away from the story, told by Mrs. Price, is that no dream is unattainable. If you work hard enough at something, anything is possible.

For the parents out there reading this, take into consideration what Mrs. Price had to say. If controlled and balanced properly with good work in school, gaming can be a healthy hobby for young teenagers. If they say “Mom, I want to be a pro gamer,” you don’t have to be okay with it at first. Mrs. Price was nervous when Attach first made the above statement, and look where he is now. However, if your child understands the importance of getting a good education and also wants to be a professional gamer, it cannot hurt to allow them to pursue their dream. Who knows, maybe your son could be the next Attach.

Are your parents supportive of you playing video games, as Momma Attach is with her son, or are they very restrictive against your hobby? Let us know by commenting below or tweeting us @eSportsNation.